Supporters of free speech should stand with Berkeley – the university, not the protesters 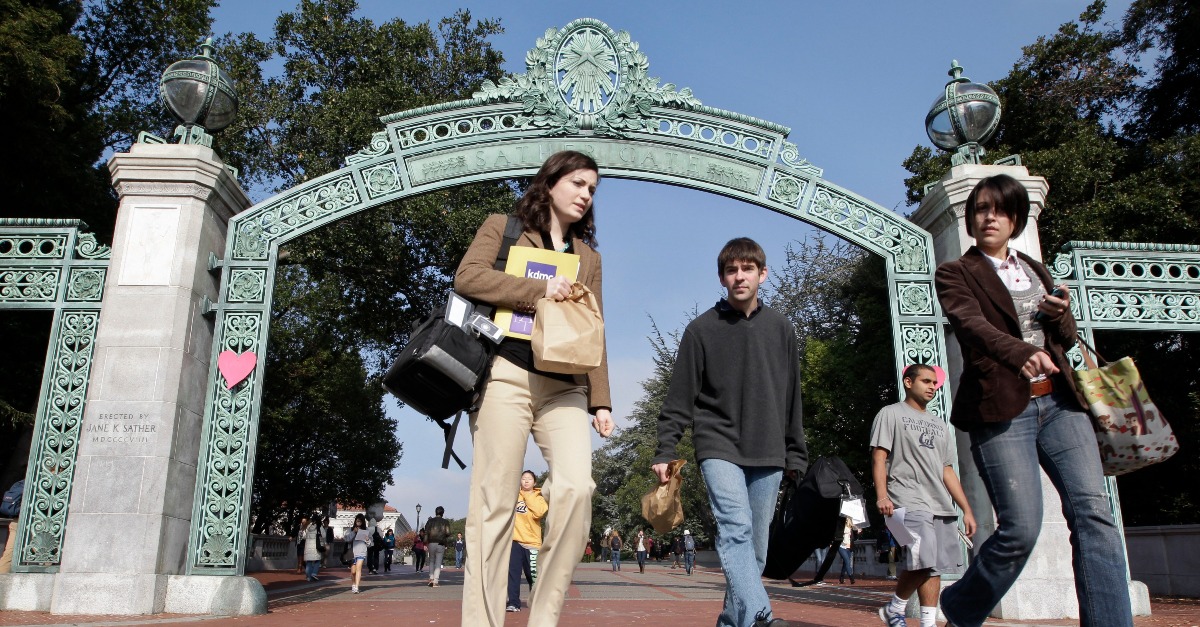 AP Photo/Paul Sakuma
n this Dec. 14, 2011, file photo, University of California Berkeley students walk through Sather Gate on the campus in Berkeley, Calif. The University of California says it has offered admission to nearly 70,000 California undergraduates, a slight dip from last year's historic high. Preliminary figures released Thursday, July 6, 2017, show that a total of 106,011 students, including nonresidents, were accepted as freshmen to one of the public system's nine undergraduate campuses. (AP Photo/Paul Sakuma, File)

To listen to some free-speech advocates, the University of California at Berkeley is a wretched hive of snowflakes and liberals, cowering in their hermetically sealed safe spaces and violently attacking anyone who challenges their beliefs.

Certainly, there is evidence to support this caricature.

A lawsuit filed in April by the Young America’s Foundation (YAF) and the Berkeley College Republicans alleges the university discriminated against them when it canceled a speech by right-wing author Ann Coulter. A pair of vice chancellors at Berkeley claimed they canceled the event because the school was unable to “ensure the safety of Ms. Coulter, the event sponsors, audience and bystanders,” but the lawsuit accuses the university of intentionally marginalizing conservative speakers by permitting “the demands of a faceless, rabid, off-campus mob to dictate what speech is permitted.”

Berkeley’s administration again cited security concerns in July when it canceled a planned speech by another prominent conservative, Ben Shapiro. YAF’s statement addressing the decision called the university’s professed inability to find a suitable venue for the speech two months in advance “laughable.”

Milo Yiannopoulos, at the time an editor for Breitbart, was scheduled to speak on campus in February, but had to be evacuated after violent protests broke out, prompting the university to cancel the speech two hours before it was slated to begin.

The university’s strategy seems clear: strangle ’em with red tape and if that fails, break stuff.

That’s not the whole story, though.

As a public university, Berkeley is prohibited from discriminating against invited speakers on the basis of viewpoint. But as University Chancellor Carol Christ wrote in a recent message to the Berkeley campus community, “the most powerful argument for free speech is not one of legal constraint…but of value.”

Christ argued that, although Berkeley is committed to keeping its students physically safe, providing intellectual safe spaces would result in a “less valuable education,” prevent them from developing “inner resilience, which is the surest form of safe space” and pave the way for more widespread censorship.

She could have easily written a foot-dragging apology letter, a Marshawn Lynch-style bare minimum exercise in complying just barely with the letter of the law. Instead, she penned a celebration of unhindered expression worthy of the birthplace of the Free Speech Movement.

Both speakers have taken shots at Berkeley, with Milo endorsing President Trump’s threat to slash its federal funds and Shapiro mocking the university’s promise to provide counseling for anyone traumatized by his speech.

These two are biting the hand that feeds them.

RARE POV: After the violence in Berkeley, can we finally admit that the alt-left is real?

A Berkeley spokesperson estimated the university will spend six figures on the Shapiro event after taking the unprecedented step of covering the staffing and event fees. Yes, the “special snowflake” students may run crying to counseling, but that’s a hell of a lot better than the alternative of cancelling controversial speakers to spare the students’ feelings. Counselors may be standing by, but so are armed police, ready to respond with force to anyone who attempts to violently silence Shapiro.

At the risk of violence, property destruction, public criticism and declining enrollment, Berkeley is expending considerable energy and funds in the fight for free speech. Rather than mock them, it’s our job to stand with them.

Berkeley may be a liberal institution, but at least in the area of free speech, they’re the old-school kind of liberals with whom right-leaning libertarians and constitutional conservatives can make common cause.

At a time when the ACLU, an evil leftist boogyman when I was growing up, is being urged by many on the left to “rethink free speech” after supporting the “Unite the Right” march in Charlottesville, political alignment is of secondary concern. The very preservation of liberal (in the classical sense) democracy is at stake.