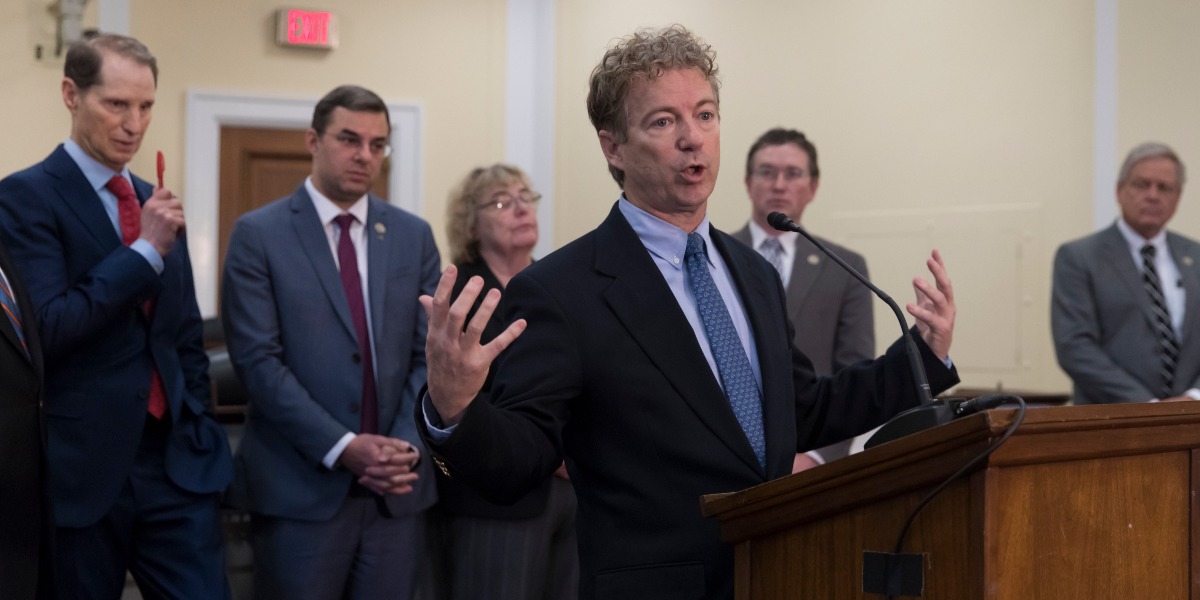 AP Photo/J. Scott Applewhite
Sen. Rand Paul, R-Ky., center, takes a reporter's question as he joins a bipartisan group of House and Senate lawmakers who are demanding the U.S. government should be required to seek warrants if it wants to search for information about Americans and insist on reforms to the FISA Amendments Reauthorization Act of 2017 to protect Americans' rights, at the Capitol in Washington, Wednesday, Jan. 10, 2018. From left are, Sen. Ron Wyden, D-Ore., Rep. Justin Amash, R-Mich., Rep. Zoe Lofgren, D-Calif., Rep. Thomas Massie, R-Ky., and Rep. Ralph Norman, R-S.C. (AP Photo/J. Scott Applewhite)

After a bill focused on surveillance reform failed in the House, Sen. Rand Paul (R-Ky.) said he will keep his promise to filibuster long term reauthorization of Section 702 of the FISA Amendments Act.

“No American should have their right to privacy taken away! #FILIBUSTER,” Paul tweeted.

“I will oppose #S139 and have introduced a substitute amendment consisting of the #USARIGHTSAct. Unlike #S139, it limits the mass collection and broad use of Americans’ data, and requires a warrant to search for it—as the #4thAmendment requires,” Amash tweeted on Monday.

The House of Representatives instead passed legislation reauthorizing the FISA in a 256-164 vote. The reauthorization now goes to the Senate for a vote.

Paul also promptly responded with a press release, immediately announcing his intention to filibuster long-term reauthorization in the Senate.

“Today, the U.S. House of Representatives passed a flawed bill that will continue the warrantless surveillance of innocent Americans. No American should have their right to privacy taken away,” Paul said. “I will keep doing everything in my power, including filibuster, to oppose this legislation and to speak out and stand up for forcing the government to get a warrant based on probable cause, as required by the Constitution.”

Sen. Paul has been adamant in his opposition to long-term reauthorization, promising to filibuster any legislation that does not require a warrant to spy on American citizens under the FISA Amendments Act. Under Section 702 of the FISA Amendment Act, the FBI may conduct “backdoor” searches of American communications with foreign targets of suspicion without a warrant.

In October 2017, Sens. Paul and Wyden (D-Oreg.) introduced the USA Rights Act in the Senate, seeking to end warrantless backdoor searches of Americans’ communications that are “routinely swept up under a program designed to spy on foreign targets.”

Paul conducted a 10-hour filibuster over NSA spying programs in 2015.