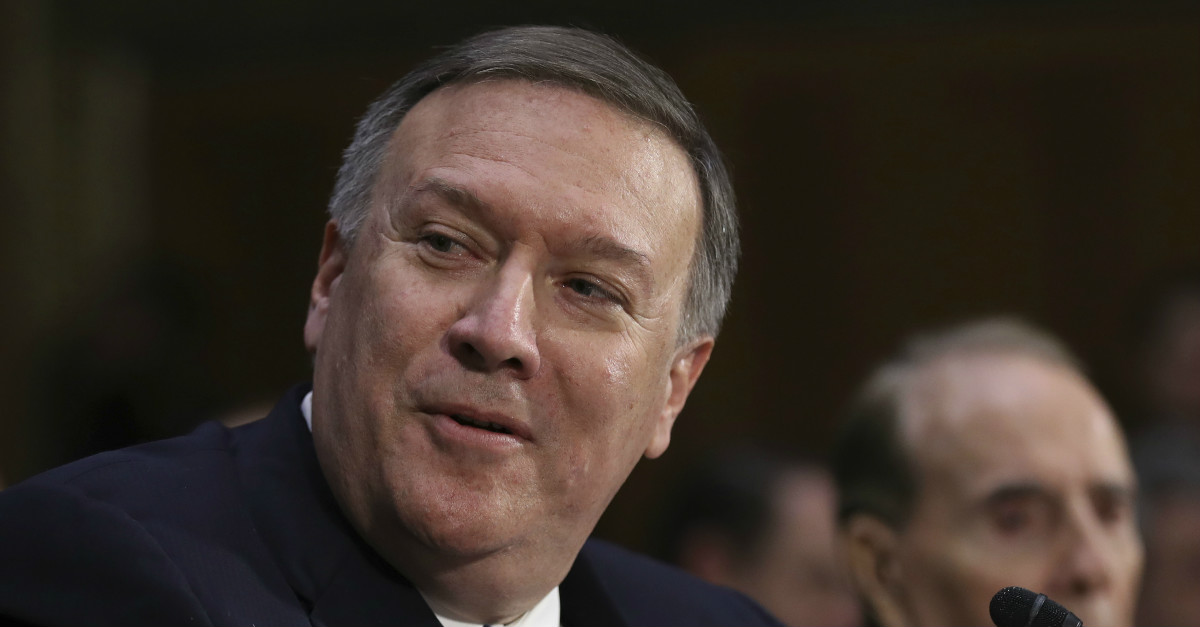 That headline isn’t an exaggeration. Mike Pompeo, the Kansas congressman and Donald Trump’s pick to head the CIA, who testified on Capitol Hill earlier today, wants the government to collect all metadata from everyone, regardless of whether they’re suspected of a crime or not.

Pompeo’s expansive view of the surveillance state was made clear in an op-ed he wrote for the Wall Street Journal earlier this year, titled “Time for a Rigorous National Debate About Surveillance.” That headline alone is a red flag: “national debate,” and its more common cousin “national dialogue,” are among the most bullshit terms in our political discourse, employed almost exclusively by those who desire the opposite. In the case of surveillance, we already had an extensive debate, between Edward Snowden’s revelations in 2013 and the passage of the USA Freedom Act in 2015. What Pompeo really means is that he wants to suppress the will of Congress and enshroud all discussion about signals intelligence back within the hyper-secretive NSA.

Among the questionable claims in Pompeo’s Journal piece is that “[c]ollection of phone metadata under the Patriot Act was banned by Congress.” In fact, the Freedom Act merely rehoused metadata collection from within the government to within the telecom companies—all the NSA has to do for access is obtain a warrant from the notoriously licentious FISA court.

But even that’s too cumbersome for Pompeo, who continues, “Congress should pass a law re-establishing collection of all metadata, and combining it with publicly available financial and lifestyle information into a comprehensive, searchable database.” In other words, they should have information about all your calls, all your communications, supplemented with whatever other color they’ve been able to gather about you. And they should be able to access it through a simple search prompt.

RELATED: Trump’s pick to head the CIA wants the government to spy on virtually everything we do

Senator Ron Wyden, one of the Upper Chamber’s few privacy advocates, finds all this to be vexing, and quizzed Pompeo about the Journal piece earlier today. Pompeo responded by saying that he’d voted for the USA Freedom Act (he did) and that it was now settled law. Wyden objected that Pompeo had written his op-ed after the Freedom Act was passed, meaning he was advocating an overhaul of present statutes. Could he really be entrusted not to create his illegal database? Pompeo assured he would “not engage in unlawful activity.” He later declared that he takes “a backseat to no one with respect to protecting Americans’ privacy.”

You can watch the entire exchange here:

RELATED: Rand Paul says Mike Pompeo will have to answer for his views on torture and mass surveillance

The problem with Pompeo harrumphing that he’ll enforce the law is that he doesn’t even seem to understand the law. Back in his Journal piece, Pompeo’s only hat-tip to the Constitution is this single assurance: “Reasonable warrantless searches are compatible with the Fourth Amendment.” In fact, they are not. The Fourth Amendment protects against “unreasonable searches and seizures,” which are defined in Nolo’s Plain-English Law Dictionary as “by a law enforcement officer without a search warrant and without probable cause that evidence of a crime is present.” Pompeo’s “reasonable warrantless search” is thus an oxymoron; either get a warrant or get out. The only question is whether metadata fall under the Fourth Amendment, which they clearly do, though court opinion on the matter is split.

None of this should be surprising coming from Pompeo, who, as Jack Hunter has reported, thinks Edward Snowden should be executed for treason. With him at Langley, our privacy rights will have to be closely guarded. Kudos to Wyden for at least making him squirm a little.