The Trump era reminds us that partisanship, not principle, is the most powerful force in politics 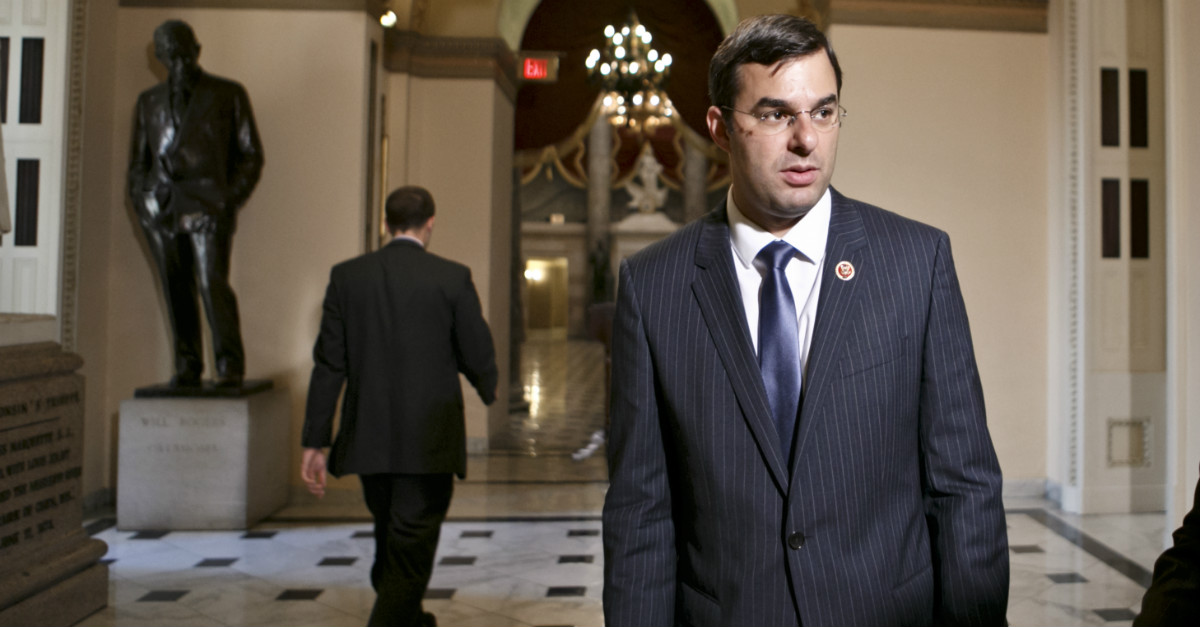 AP Photo/J. Scott Applewhite
Rep. Justin Amash, R-Mich., comments about the vote on the defense spending bill and his failed amendment that would have cut funding to the National Security Agency's program that collects the phone records of U.S. citizens and residents, at the Capitol, Wednesday, July 24, 2013. The Amash Amendment narrowly lost, 217-205. The White House and congressional backers of the NSA's electronic surveillance program lobbied against ending the massive collection of phone records from millions of Americans saying it would put the nation at risk from another terrorist attack. (AP Photo/J. Scott Applewhite)

Rep. Justin Amash of Michigan is one of the most principled members of Congress. The political newcomer rode the tea party wave of 2010 to Washington where he has never hesitated to stand up for smaller government, constitutional fidelity and the rule of law. The conservative grassroots have long adored Amash, as do many libertarians who see the congressman as the biggest liberty movement rock star this side of Ron and Rand Paul.

But this year, some of the same conservatives have soured on Amash, calling him a ?RINO? among other insults.

RELATED: Responding to the London Bridge attack with policies made in fear is exactly what we shouldn?t do

Rep. Amash had stood up to President Obama over mass surveillance, foreign policy and constitutional issues time and again, and had always claimed it wasn?t about party but principle.

Amash made headlines earlier this month when he was answered a hypothetical question from a reporter: If former FBI Director James Comey?s allegations were true, that Trump asked the agency to back off its investigation of Michael Flynn, would that be an impeachable offense? Amash said it would be.

Within the hour, major news sources were reporting that a Republican had come out for impeaching the president even though that?s not what Amash had actually said. I did note at the time that it was not surprising that one of the most libertarian members of Congress was unafraid to hold a Republican president to the same standards applied to Barack Obama.

Many conservatives were furious at Amash, but the congressman stuck to his guns.

?The reality is if the same question were asked to me about Barack Obama with any number of things that he did my answer would have been the same and Republicans at home would have been cheering it,? Amash told Battle Creek, Michigan?s WBCK after the controversy.

?So this is not a new line of questioning, nor is it unique to this president,? Amash said. ?I?ve been asked these things before about President Obama and about several members of the Obama administration and gave similar answers.?

?The difference is they don?t play it on the news,? Amash added.

A Republican criticizing a Democrat isn?t newsworthy in the same way a Republican questioning a member of his own party is, particularly the president. But it is almost always the partisanship?the pure tribalism?that has a greater pull for most people than ideology or principles. Amash Tweeted Wednesday, ?An ideological person can be persuaded through reason, but a partisan cannot be persuaded of anything countering the consensus of his tribe.?

Rep. Amash is one of the most conservative members of Congress, yet when conservatism or Republicanism becomes redefined as simply marching in lockstep with the president, principled leaders are inevitably going to run afoul of their base.

It?s the price they pay for being principled. It?s also another reminder of why most politicians aren?t principled.

I recall when Congressman Ron Paul ran for president in 2008, one of the most popular attacks on him from the right was that he wasn?t a real Republican because he criticized George W. Bush so often, particularly about the Iraq War. Now we have a Republican president who has spoken more harshly about the Iraq War than even Ron Paul did, but most conservatives are fine with this precisely because that?s what conservatism is to them now: Praising, defending and coveting Donald Trump.

It?s being a hack.

Democrats do this too. Nothing rallied the left more during the Bush years than the war on terror?with millions marching in the streets around the world?and even though Obama continued and even expanded so much of Bush?s foreign policy and anti-civil liberties practices, the antiwar left basically evaporated on January 20, 2009.

It wasn?t as big a deal to liberals when their guy was doing it.

RELATED: Why those who warn against ?overlearning the lessons of Iraq? are wrong

Today, many of the same conservatives who once cheered Amash and other Republicans for wanting to investigate any impropriety by Hillary Clinton concerning Benghazi cannot stomach a member of their own party even questioning whether or not Trump might have overstepped bounds.

?Frankly I?m highlighting the problem with our system right now, with our two party system, with how powerful it is, with how much it sways peoples? opinions on things,? Amash said to WBCK.

?If Barack Obama were in the exact same circumstances, Republicans would be crying out for his impeachment,? he added.