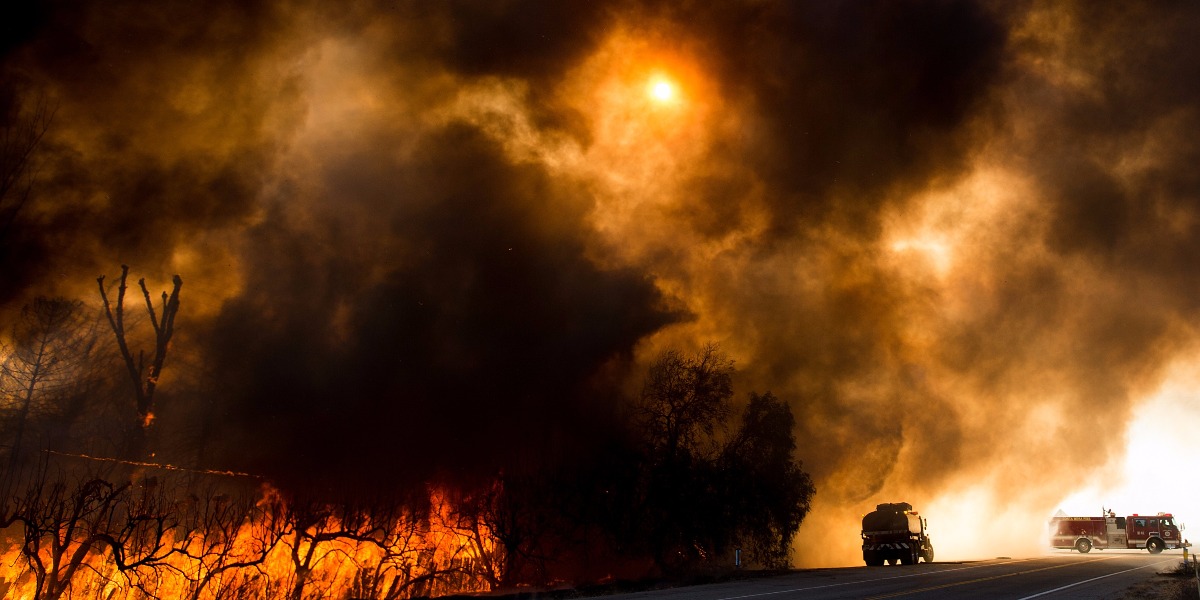 AP Photo/Noah Berger
Firefighters battle a wildfire as it crosses Cajon Boulevard in Keenbrook, Calif., on Wednesday, Aug. 17, 2016. Firefighters had at least established a foothold of control of the blaze the day after it broke out for unknown reasons in the Cajon Pass near Interstate 15, the vital artery between Los Angeles and Las Vegas. Five years of drought have turned the state's wildlands into a tinder box, with eight fires currently burning from Shasta County in the far north to Camp Pendleton just north of San Diego. (AP Photo/Noah Berger)

The wildfires that plagued Northern California this fall have been truly devastating. At least 43 people have been killed; 100,000 people had to evacuate their homes, nearly 9,000 homes and businesses were destroyed, and 245,000 acres have burned. As of this writing, the thousands of firefighters who have flooded into the state to help are finally getting the blazes under control, but five big fires are still active.

Much of the land affected was in California’s wine country, but in 2017, grapes aren’t the only crop grown in the region. Marijuana farms have also been established in the area in the last few years since California legalized medical — and later, recreational — marijuana.

RARE POV: Sorry Jeff Sessions, but support for legalizing marijuana is now at a record high

You see, even though these pot farmers are in compliance with state law (and the Constitution gives the federal government no authority to enact drug prohibition), the continued federal ban on weed means it is very difficult for marijuana farmers to get bank accounts and insurance for their businesses. Christian Britschgi at Reason reports:

Since marijuana is still illegal at the federal level, most banks refuse to do business with the cannabis industry. Of the 12,000 or so banks and credits unions in the United States, fewer than 400 are willing to service the needs of marijuana dispensaries, growers, and wholesalers. That left many growers without bank accounts where they could deposit the returns from their operations. […]

That loss of savings is compounded by the cannabis industry’s restricted access to insurance. They are unable, for obvious reasons, to purchase crop insurance directly from the federal government, and getting it from a private provider can be exceedingly tricky. Remarkably few insurance policies exist specifically for marijuana. And while general commercial liability and crop insurance is available, even then there is no guarantee that these business will be covered if something happens to their product.

Imagine losing your home, farm, and savings all at once ? with no chance of reimbursement ? not because of any financial irresponsibility on your part, but because Washington makes it too risky for banks and insurance companies to do business with you.

This is incredibly cruel financial discrimination, and it wouldn’t exist were it not for the war on drugs. Sure, some banks and insurers might choose not to insure marijuana farms for financial or ethical reasons, and that would be their prerogative. But most would happily work with these profitable, in-demand businesses.

There are already a lot of reasons to end the failed, life-ruining war on drugs. Add this one to the pile.