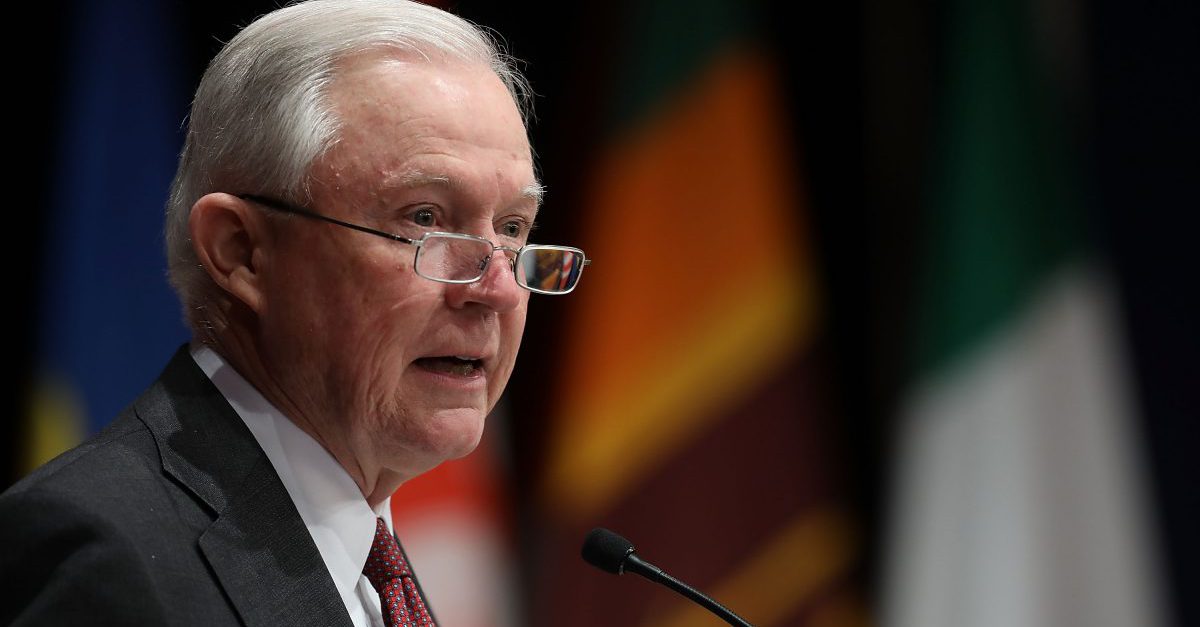 Photo by Chip Somodevilla/Getty Images
WASHINGTON, DC - DECEMBER 04: U.S. Attorney General Jeff Sessions delivers remarks on the Trump Administration's anti-corruption efforts during the opening session of the Administration at the Global Forum on Asset Recovery (GFAR) at the International Finance Corporation Auditorium December 4, 2017 in Washington, DC. Sessions highlighted the the 2015 shooting death of Kate Steinle as an example of international corruption and called on the 28 countries in attendance to increase cooperation to fight crime. (Photo by Chip Somodevilla/Getty Images)

The nation is in the grips of an opioid crisis on an unprecedented scale, and Attorney General Jeff Sessions’ renewed war on legal marijuana will make it worse.

I?m from the epicenter of this crisis, Dayton, Ohio. Gone are the days when people think of Dayton and envision the home of the Wright brothers and the location of the single largest employer in the state of Ohio, Wright-Patterson Air Force Base. These days, Dayton makes the news because it?s the overdose capital of the United States.

Dayton didn?t get such an undesirable title by blind fate. Ohio, much like the Attorney General himself, has pursued policies proven not only to fail but to cause harm to those afflicted by addiction.

I?m confident when I say we Daytonians all know someone who has been affected by the opioid epidemic, perhaps even someone who lost their life to it. This is clearly a life-or-death issue and it deserves a serious solution. Luckily, we can study how other countries brought an end to their opioid crisis.

Starting in the 1980s, Portugal was one of the drug capitals of Europe. They were facing overdoses, addiction, drug-related crime, and HIV infection rates on an unprecedented scale. As the deaths proved, Portugal, much like Dayton today, was losing the war on drugs?and then they weren?t. In 2001, the tides changed and it was thanks to a radical new policy: decriminalization of all drugs.

The Portuguese government started treating those battling drug addiction not as criminals, but as people in need of help. They were offered support services, medical treatment, and harm reduction tactics. Over the next few years, Portugal would see a dramatic drop in the aforementioned consequences related to drug addiction. Their policy saved lives and influenced other countries, such as Norway, to follow Portugal?s approach.

Ohio now stands at a crossroads: continue the status quo or enact revolutionary reform. That is, Ohio can continue to treat nonviolent drug users as criminals?an ineffective and costly policy that distracts and depletes police resources. In contrast, I propose Ohio try a more effective policy: end the criminalization of drugs, offer people support services, and treat the opioid epidemic as a public health emergency, as President Trump recognizes it to be.

It?s true that many of these drugs are harmful, but so are cigarettes, soda, junk food, and alcohol. To criminalize any of these and therefore dedicate inordinate amounts of public resources to jailing nonviolent users?under the guise of being ?tough on crime?? is absurd. Indeed, alcohol has been shown to be more dangerous than heroin or cocaine.

The entire country needs a solutions-based approach to the opioid epidemic, and we should avoid failed and outdated ?tough on crime? policies and their rhetoric.

After Colorado legalized marijuana, the state saw a decrease in opioid-related deaths. People would much rather have safe and legal access to medical or recreational marijuana than take side-effect ridden, life-threatening opioids. As the Attorney General should note, studies have shown that states with legal marijuana have a 25 percent reduction in opioid addiction. The legalization of recreational marijuana is now on the Ohio ballot. If this passes in 2018, it will be a critical step in saving lives not only in Dayton, but all throughout Ohio.

As the World Health Organization recently reported, there is no public health risk or abuse potential for cannabidiol. Known as CBD, cannabidiol is used to treat everything from epilepsy to cancer, psychosis, Parkinson?s disease, multiple sclerosis, and much more. At the end of the day, marijuana is less harmful than alcohol and tobacco and is an alternative to highly addictive opioid narcotics.

Ohio is predicted to be one of the next 15 states to legalize marijuana, and with a record 64 percent of Americans now supporting legal marijuana nationwide, there?s hope for progress. Ending the opioid epidemic will take a comprehensive approach, and having marijuana as a legal alternative to highly-addictive pills is part of that policy.

When registered medical practitioners hand out opioids like candy, it makes dangerous narcotics readily available for those at risk of addiction. As Sen. Rand Paul (R-Ky.), a doctor himself, pointed out in a Congressional hearing last month, big pharmaceuticals and the medical industry must re-evaluate their prescription guidelines. That?s another step toward ending this crisis.

This is not a question of being tough on crime, but asking why addiction should be a crime at all. For decades, America has unsuccessfully waged the war on drugs. A change in strategy is clearly needed. The policies I advocate for have been proven to work elsewhere. By following the path revealed by governments such as Portugal and states like Colorado, America will lead the charge in winning the real war on drugs, saving countless lives in the process.

From the local to the federal level, now is the time for America to set an example for the rest of the world by bringing an end to the opioid epidemic. Unfortunately, Attorney General Sessions? draconian approach to drug policy is a major roadblock toward solutions-based policies.

Michael Hall is the North American Communications Associate with Students For Liberty (SFL) and is a Dayton, Ohio native.