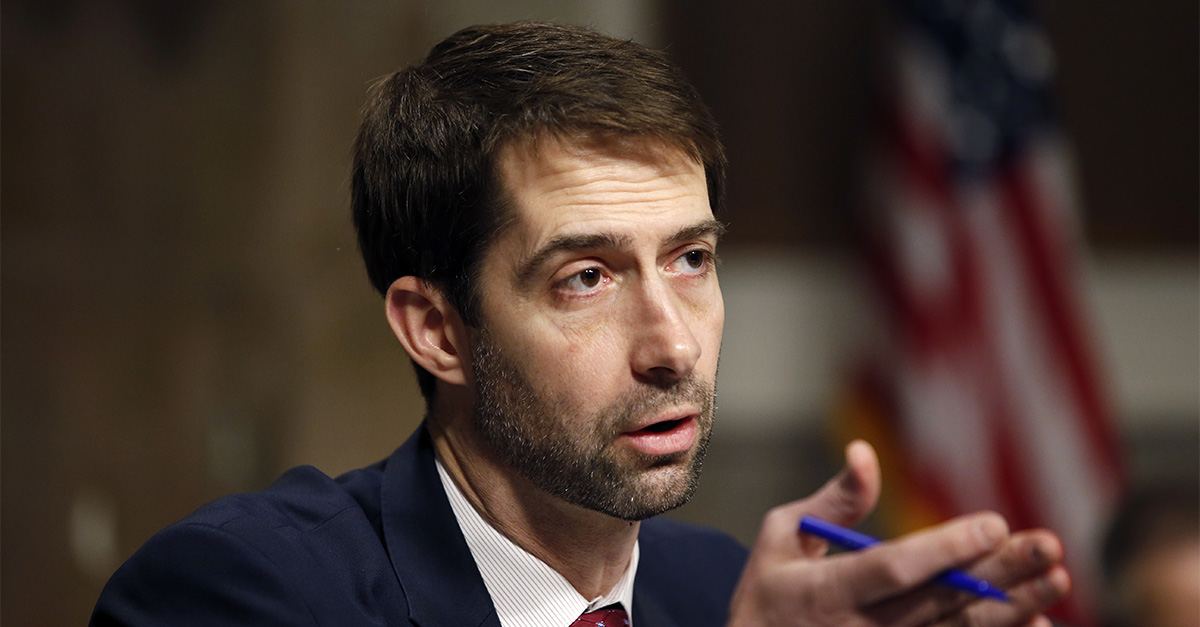 The incessantly anti-privacy, anti-peace, and anti-justice Senator Tom Cotton is avidly defending his title of America’s most anti-liberty senator, this time arguing that what this country needs is more people in prison (emphasis added):

Cotton, who has been an outspoken critic of the bill in Congress that would reduce mandatory minimum sentences, smacked down what he called “baseless” arguments that there are too many offenders locked up for relatively small crimes, that incarceration is too costly, or that “we should show more empathy toward those caught up in the criminal-justice system.”

“Take a look at the facts. First, the claim that too many criminals are being jailed, that there is over-incarceration, ignores an unfortunate fact: for the vast majority of crimes, a perpetrator is never identified or arrested, let alone prosecuted, convicted, and jailed,” Cotton said during a speech at The Hudson Institute, according to his prepared remarks. “Law enforcement is able to arrest or identify a likely perpetrator for only 19 percent of property crimes and 47 percent of violent crimes. If anything, we have an under-incarceration problem.” …

“I saw this in Baghdad. We’ve seen it again in Afghanistan,” recalled Cotton, who served in the Army during both wars. “Security has to come first, whether you’re in a war zone or whether you’re in the United States of America.”

These comments are remarkable, if not surprising: Cotton has been a consistent opponent of much-needed criminal justice reform, so this new set of smears and half-truths is about what I’d expect from him.

For starters, Cotton knows full well that when reform advocates say we have a mass incarceration problem, we’re not talking about letting murderers go free or allowing theft to go unpunished. We’re talking about the fact that, as is increasingly well-known, the “United States has less than 5 percent of the world’s population. But it has almost a quarter of the world’s prisoners.”

No other developed nation comes close to our rate of imprisonment or count of inmates. That’s a troubling thought in a country proud to consider itself the land of the free.

It’s especially troubling given that one out of every three prisoners admitted to a state or federal prison is there on drug charges. Comparatively, just one in four is there for violent crime. Meanwhile, over-criminalization is a major reason incarceration rates stay inordinately high even as violent crime rates have massively declined since the 1990s. People are getting jailed for things that are not—or rather, should not—be jail-worthy.

While it certainly may be true, as Cotton says, that there are Americans who should be in jail who are not, there are many, many more who are in jail when they should be free.

Cotton also knows he’s lying about the nature of the criminal justice reform legislation in Congress that he’s arguing against. As I’ve noted before here at Rare, Cotton’s whole shtick about this bill is rife with falsehood.

While it’s true (and good!) that the bill would lower mandatory minimums for nonviolent drug crimes, it would lengthen mandatory sentences for some violent crimes, including “selected firearm crimes and creating new mandatory minimums for offenses related to domestic violence and supporting terrorism” as well as “drug crimes committed by people with prior serious violent felony convictions.”

In other words, “let[ting] out violent felons,” as Cotton has previously claimed the legislation proposes, is exactly what it won’t accomplish.

Furthermore, Cotton’s likening of the justice system to a war zone shows exactly how twisted his thinking on this subject really is.

Americans are not the enemy.

Police are not soldiers tasked with controlling us.

A militarized mindset in policing is exactly what we should be trying to change, not encourage—as Rare’s Kevin Boyd has explained:

[T]he roles of the police and the military are different. The military’s job is to simply destroy the enemy, while the police’s job is to enforce the law, but also to take care not to violate the constitutionally protected liberties and rights of suspects. The military is trained to use overwhelming force where as the police are trained to only use deadly force only if they’re in imminent danger. The two mentalities are not the same because they do not have the same mission…

Police training needs to move away from the military mindset of the warrior and get back to a mindset of serving, protecting, and more importantly being a part of the community instead of being at war with it.

Cotton would recommend the opposite. His irresponsible, deceptive rhetoric represents the worst of recalcitrant disregard for our constitutional rights, not to mention the broader American ethos of liberty. He is an embarrassment to the Senate—and to the truth.