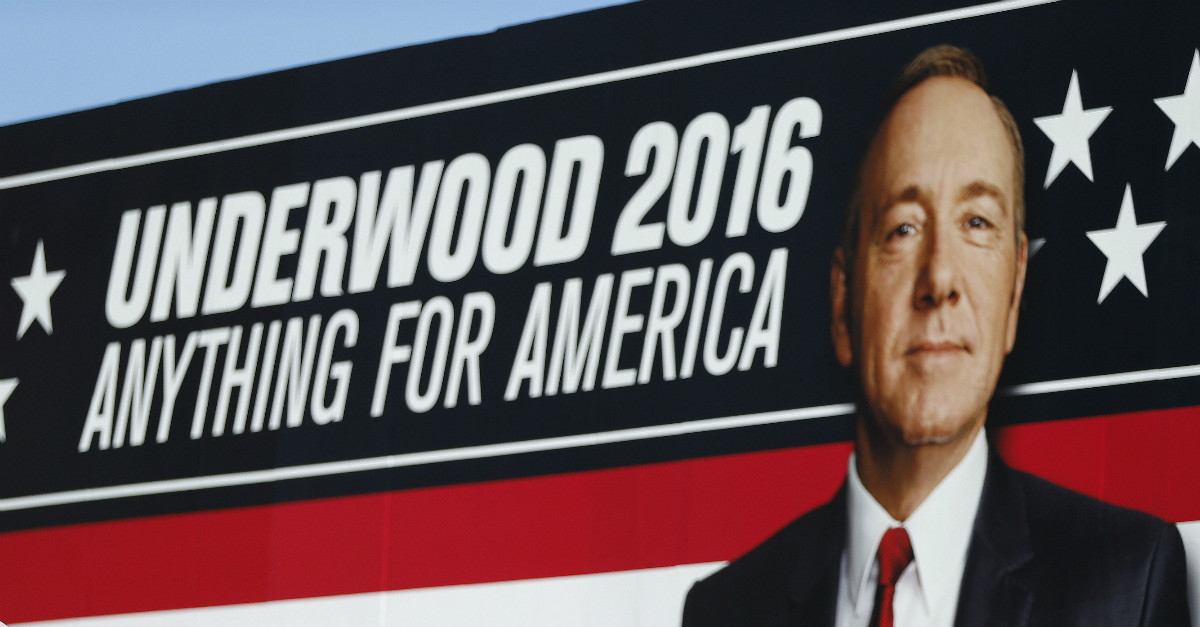 As I drove home on Election Night, my head spinning with fear and shock over what had just happened, I found myself wondering how the upcoming season of “House of Cards” would ever match the insanity of the real 2016 campaign.

As protests broke out and accusations of Russian meddling gained acceptance, I repeated the question.

Now, seven months later, I have my answer.

Now in its fifth season, the show that began as a slick, cynical, behind-the-scenes look at how the sausage is made in Washington has morphed into a voyeuristic slaughterhouse snuff film.

An op-ed (that I can’t find) published during the second season argued that while Aaron Sorkin’s “The West Wing” was a dream of what we hope politics can be, “House of Cards” is a nightmare of what we fear it’s become.

During the Obama administration, which very much upheld Sorkin’s ideal of big government as “a place where people come together and no one gets left behind,” the conspiratorial Machiavellianism of Frank Underwood’s (Kevin Spacey) monologues and machinations was a necessary corrective.

The show’s first two seasons practically screamed that the entire Washington establishment believes we exist to serve them, not the other way around, and it’s probably not a stretch to say the show contributed to the anti-establishment sentiment that swept both parties during the 2016 election.

The whole thing could have been a Rand Paul campaign ad.

RELATED: Sesame Street spoofed ‘House of Cards’ and it is the most amazing spoof you will ever see

Then as Obama’s term came to a close and we found ourselves facing an election between a lifelong Democratic politician widely regarded as corrupt and a pseudo-Republican neophyte who openly bragged about his cronyism, the show found itself forced to yell in order to be heard.

By the penultimate episode of the new season, it hit a fever pitch.

To win his election, Underwood stokes the nation’s fears of a non-existent network of domestic terrorists and commits an act of cyberterrorism that he proceeds to blame on them. He then uses the ensuing paranoia to justify the closure of polling stations in precincts where he trails his opponent.

Threatened with impeachment, Frank pushes the secretary of state down a flight of stairs to temporarily stop her from testifying against him. It was only four or five stairs, and I half expected her to get up, brush herself off, and say “What the hell, Frank?!” and I’m not sure what reason Frank could have had for expecting any other outcome. But no, the plot demanded that she fall into some sort of coma, and she dutifully complied.

Frank then proceeds to harangue the congressional committee investigating him, admitting his corruption while accusing them of complicity in the same crooked system. “You’re addicted to slogans and action… Just as long as I’m doing something, you’re happy to be along for the ride,” he says to the viewer before announcing that he will resign the presidency, leaving his wife/VP Claire (Robin Wright) as president.

RELATED: Trump’s conflicts of interest are only a problem because the presidency is way too powerful

He leaves office after realizing that the abstract idea of absolute power he’s been chasing does not reside in the Oval Office. To him, the power to make laws and command troops pales in comparison to the power to create entire realities, to construct the meta-narratives in which the rest of us just live.

He wants nothing less than to be God.

“The American people don’t know what they want,” he says to Claire. “They even need help writing their wildest dreams, crafting their worst fears. Lucky for them, they have me… One nation, Underwood.”

In Shakespeare’s plays, the wicked dealings of rulers bring misfortune on all their subjects and throw nature itself out of alignment. We may not believe that comets really blaze forth the deaths of princes, but we acknowledge a version of the same idea when we talk about Obama’s America or Trump’s America. It’s become a cliché to speak of the country’s malaise under Carter and its optimism under Reagan.

“House of Cards” season five, which showrunner Melissa James Gibson said takes place on the “battleground” of “the American psyche,” captures how large the presidency looms in our national imagination, and scolds us for elevating the office to such a height that it can only appeal to egoists and psychopaths.