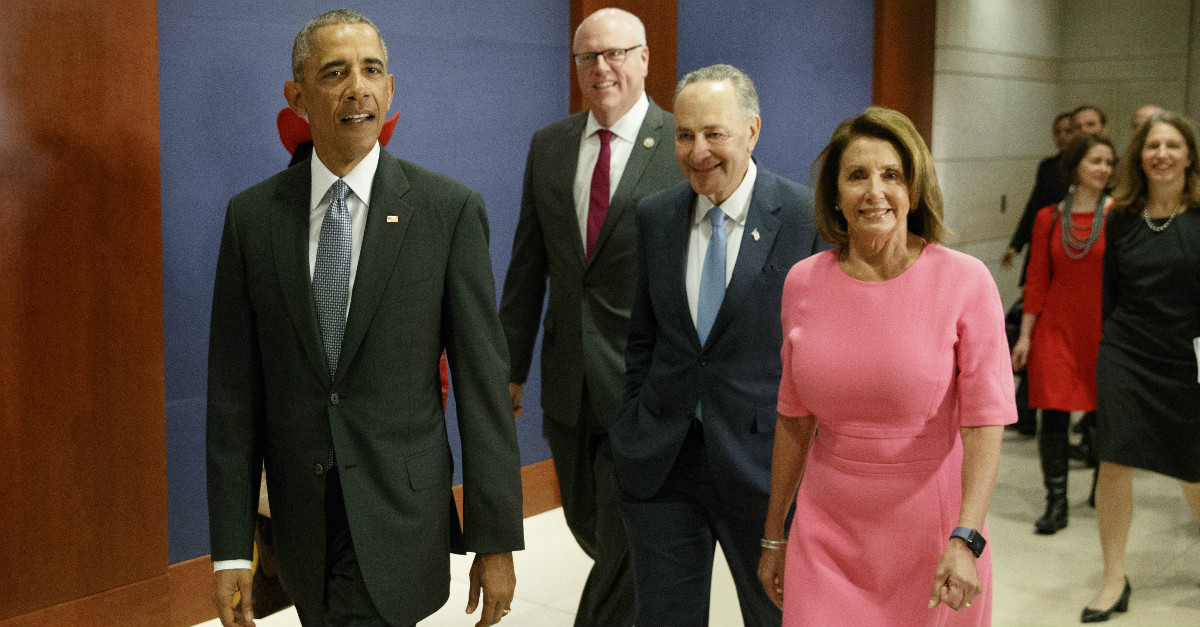 It’s technically still the Christmas season — the 12 days of Christmas aren’t complete until tomorrow — which is perhaps why congressional Republicans’ personal Ghost of Christmas Future has shown up in the form of Sen. Chuck Schumer (D-N.Y.), as CNN reports:

Sen. Chuck Schumer lamented Tuesday the Democrats’ move to diminish the number of senators needed to confirm Cabinet picks from 60 votes to 51, because the new rule now hurts his party. […]

In 2013, then-Senate Majority Leader Harry Reid and other top Democrats became convinced GOP delaying tactics were crippling Washington. They triggered the so-called “nuclear option” which — over the objections of Republicans — lowered the threshold to overcome a filibuster from 60 to 51 votes.
“Wish it hadn’t happened,” Schumer said.

Related: Take a deep breath over Russian hacking, before we end up starting another war

Now that his party controls neither Congress nor the White House, Schumer (and undoubtedly many other Democrats) are realizing just how shortsighted it was to change Senate rules to speed the agenda of the party in power.

“I argued against it at the time,” Schumer recalled of the “nuclear option” against the filibuster. “I said both for Supreme Court and in Cabinet should be 60 because on such important positions there should be some degree of bipartisanship.” His caution prevailed where SCOTUS is concerned, but now Cabinet nominees can be approved with a simple majority vote.

The lesson here for the GOP is serious, and one the new ruling party is already in need of learning. Just this week, House Republicans under the leadership of Rep. Paul Ryan (Wis.) passed a rules package which — though thankfully not as drastic as it might have been — is a also step toward ensuring simple majoritarian rule and squashing all minority dissent.

There have even been rumblings of Senate Republicans extending the Democrats’ nuclear option to include filibusters of Supreme Court nominees, the change Schumer helped prevent a few years ago. Mercifully, it sounds like most GOP senators understand that would be a foolish mistake.

What this really comes down to, as I wrote back in 2015, is that both parties have a nasty habit of governing as if they will never lose another election. They trust themselves to all sorts of unwise and unconstitutional authority with a blithe insistence that it will never fall into less responsible hands.

Needless to say, that is exactly what always happens.

Related: The Miranda warning needs to be updated for the digital age—here’s how

A better approach would be governing on the assumption that one’s own party — the “good guys” — will never hold office again, and therefore one’s time in power is best spent ensuring authority is limited so it cannot be abused.

Governing like losers would tend to protect Americans’ civil liberties, produce real limits on the power of the presidency, and guard against shortsighted plans made on the assumption of future control of one or more branches of government.

Republicans and Democrats, you don’t have to like or trust each other. Just turn that suspicion into something more productive. Become a watchdog of power, and don’t give any part of the government authority you wouldn’t want to lose to the other side.