Roy Moore lost. So did Donald Trump and Steve Bannon 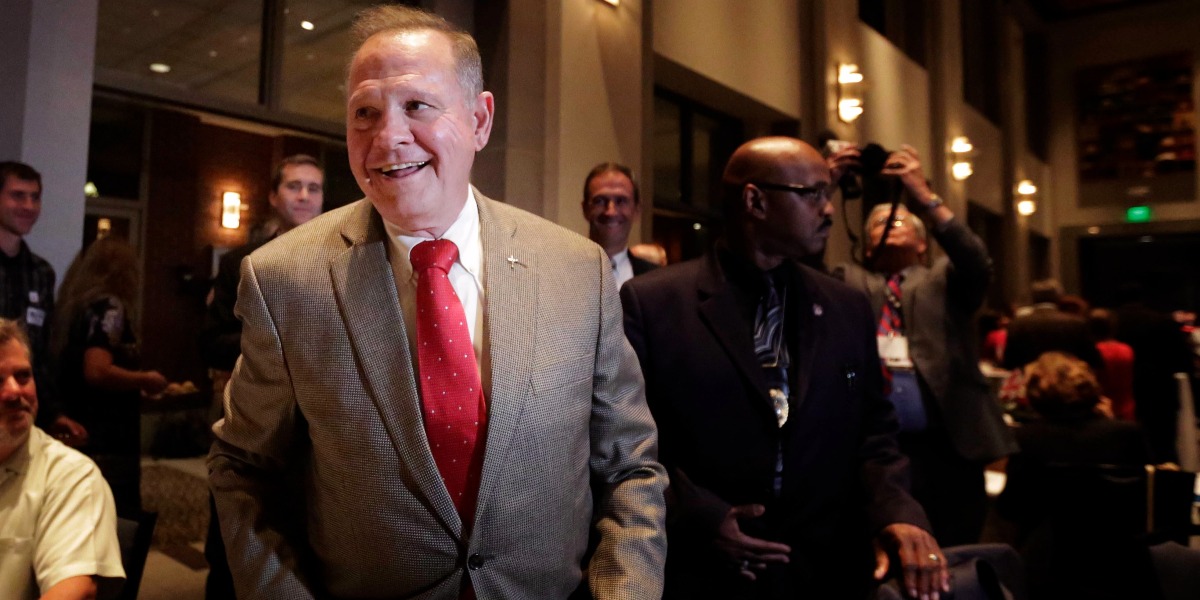 Alabama is the quintessential definition of a red state, a place where conservatism reigns over every issue from gay marriage and criminal justice reform to taxes and immigration. Alabamians, by an overwhelming margin, are Republican voters; the Pew Research Center ranks Alabama the 7th most conservative state in the country, where registered Republicans make up over 51 percent of the electorate. In the 2016 election cycle, the GOP racked in $14.9 million in campaign contributions from various donors, a figure nearly three times larger than the Democratic Party’s coffers. Six out of seven members of the Alabama congressional delegation have an “R” next to their name. Before last night, the last time a Democrat won a Senate election was in 1992.

Last night’s win by Doug Jones over Roy Moore, therefore, was the Alabama equivalent of Donald Trump’s victory over Hillary Clinton. While some gave Jones a chance to pull off an upset over the evangelical Moore – a fixture in Alabama politics for decades – many others assumed that even credible allegations of sexual assault against his opponent wouldn’t be enough to power a Democrat to the U.S. Senate. The polls, all over the place in the final days, weren’t any help. When the election was called for Jones at approximately 10:30 pm, far earlier than most anticipated, violent tremors shook the political world for the first time since November 8, 2016.

A lot of ink will be spilled on why Roy Moore lost. It could be for a number of factors: African Americans in Montgomery, Birmingham, and Selma were mobilized; women threw their hats in the ring for the Democrat over the Republican by a 15 point margin; the corroborated allegations of Moore having molested a 14-year-old girl in his car and searching for teenage dates when he was in his 30s was the stuff of horror movies; and Moore’s erratic statements on social issues may have turned off just enough Republican professionals in the suburbs of Mobile to allow Doug Jones to pull out a win.

But put the two candidates aside for a moment and focus on what the Alabama results mean for Washington’s biggest players.

For Senate Minority Leader Chuck Schumer, a Jones won is an enormously symbolic and crucial Democratic pick up of a Senate seat that up until now was a shoe-in for a Republican. Not in Schumer’s wildest dreams would he have believed a Democrat could win a statewide race in Alabama. But now that it has actually happened, Democrats in Washington can use it as one more piece of evidence – after a statewide sweep in Virginia earlier in the fall – that next year’s midterm elections are looking brighter and brighter. Expect Democratic fundraising to go through the roof and more Democrats in the South taking a second look at challenging GOP incumbents for power at the local, state, and federal level.

In an odd way, Senate Majority Mitch McConnell is a winner in all of this as well. While it’s certainly true that a Democratic pick-up spells bad news mathematically for McConnell and for the GOP’s margins in the Senate (a 51-49 majority is pathetically weak and shaky), the fact that Vice President Mike Pence won’t be swearing in Roy Moore is a huge breath of relief for Senate Republicans who never took a liking to the judge in the first place. To most of them, Moore was a Southern stereotype from another century, prone to idiotic outbursts about how Muslim Americans shouldn’t be elected to Congress and how the 9/11 terrorist attacks were punishment from the Almighty for America’s sinful ways. When revelations about Moore’s predatory behavior with underage girls broke in the Washington Post, people like McConnell, Jeff Flake, and Cory Gardner didn’t need to pretend anymore that they liked, respected, or supported a Moore candidacy. The man would have been a toxic mess for the Republican Party brand.

Having Moore inducted into the U.S. Senate would have been like inducting David Ortiz into the New York Yankees Hall of Fame, except far more uncomfortable. The former Alabama Supreme Court Chief Justice proved throughout his career and throughout this campaign that he was not senatorial material. Doug Jones may be a Democrat, but at least the GOP caucus won’t have to answer an endless list of questions about when or if they would expel Roy Moore from the chamber.

The big losers: Donald Trump and Steve Bannon. When every other Republican in Washington ran away and covered their mouths so they didn’t have to inhale Moore’s stench, Trump took deep, gasping breaths and publicly vouched for him on Twitter, on television, and at a rally in Pensacola, Florida.  Trump, who was burned in his endorsement of Luther Strange and has never gotten over that loss, went to bed burned again.

As for Bannon, the allure of a right-wing political Svengali has started to wear off. Moore was Bannon’s man through and through, with the chairman of Breitbart News campaigning hard on the trial – even as his former boss sent out words of support to Moore’s Republican challenger in the primary. The idea was to use a Moore victory as a stake in the heart of the Republican establishment and notch one more tactical win in the anti-McConnell crusade. Instead, it was Bannon who was exposed as a political buffoon and the McConnell camp grinning ear to ear.

Who would have thought that a Senate race in Alabama would be so important to so many of America’s political factions?