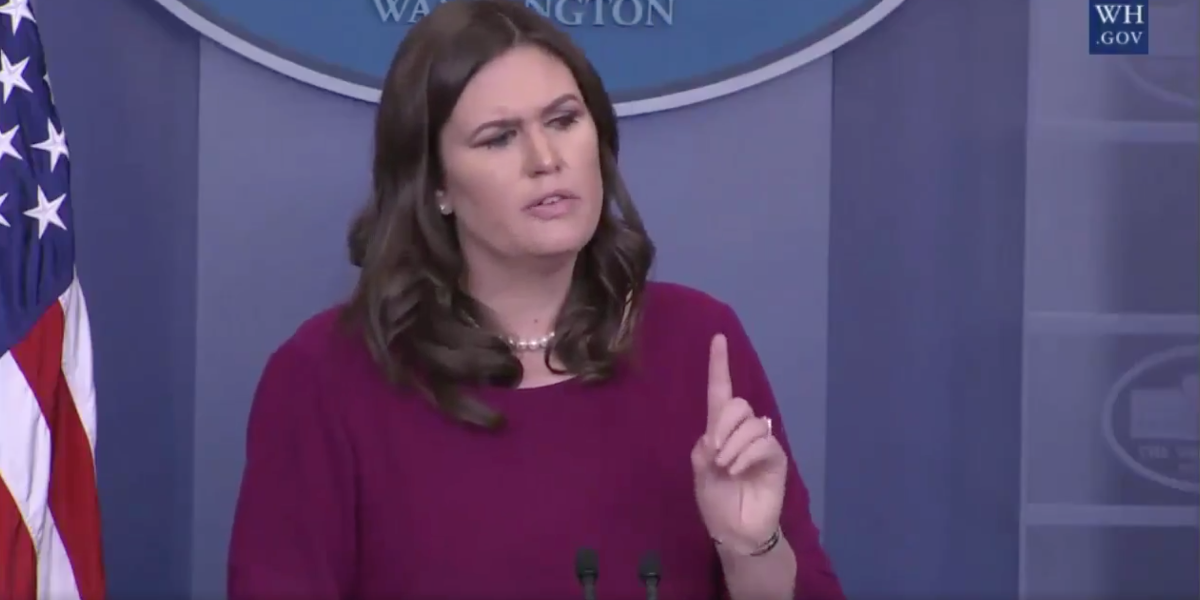 You might think that after their breathless take-down of Donald Trump, Jr. Friday, followed mere hours later by an embarrassing retraction, the mainstream media would lie low for a while. You’d be wrong.

Instead, the cable news outlet responsible for a story that any standard editorial process would have ensured never saw the light of day, came out guns blazing against the White House Press Secretary Sarah Huckabee Sanders on Monday, over?of all things?the term “fake news.”

I have so much respect for this woman!!!

Showing a stunning lack of self-awareness, CNN’s Jim Acosta took issue with Sanders’ use of the term, claiming that journalists sometimes make “honest mistakes,” but that it doesn’t mean they’re “fake news.”

?When journalists make honest mistakes, they should own up to them. Sometimes, and a lot of times, you don?t,? Sanders said.

Acosta tried to interrupt her, but Sanders shut him down. ?I?m sorry, I?m not finished,? she replied. ?There is a very big difference between making honest mistakes and purposefully misleading the American people… you cannot say it?s an honest mistake when you?re purposely putting out information you know is false.?

In a breathtaking example of CNN’s complete inability to grasp the gravity of its false Friday report, Acosta brazenly asks Sanders to cite a specific mainstream news story that has been false. Sanders used the “ABC report by Brian Ross,? another botched ?exclusive? that resulted in the ABC reporter’s suspension.

But Sanders could have given the example of CNN from only one day earlier. On Friday, CNN ran the headline: ?Exclusive: Email shows effort to give Trump campaign WikiLeaks documents;? and for several hours, CNN, CBS and MSNBC pontificated about the scoop and its ?evidence? of collusion between the Trump campaign and alleged Russian backers of Wikileaks. That’s before the Washington Post debunked the story, and CNN and CBS had to admit that they had got the date on the email wrong. Far from a scoop, Donald Trump, Jr. had simply received an email with publicly available information on the Wikileaks data dump.

For its part, CNN seems to have run with this story entirely on the word of two people and its ?multiple sources? instead of getting a copy of the email for themselves. CNN implied that the email sender had an exclusive connection to Wikileaks, even when they admitted they couldn’t identify the sender. CNN has refused to reveal the sources that provided the outlet with the erroneous dates on the email and has not taken disciplinary action against the reporters.

This is a massive failure of accountability on the part of the major networks, and their despicable treatment of the White House press secretary Monday suggests that they are completely blind to their transgressions. How is running a heavily played-up, exclusive “scoop” implying collusion between Wikileaks and the Trump campaign before having to retract the report due to the wrong date on the email anything other than “fake news?” After all, CNN’s report had already gone viral on social media networks, and many of the people who promoted the story never posted a follow-up informing their followers that the story had been debunked.

Acosta frequently challenges the Trump administration during White House press briefings, which led to the president once famously pointing at him and calling him “fake news” in person.

But if Friday’s breathless, hyped-for-hours false narrative is not the very definition of “fake news,” then what is?