From the moment that reporters and federal investigators began searching for incriminating evidence of the Trump campaign’s sinister relationship with the Russians, Trump by and large was able to depend upon one argument that his opponents were unable to refute: despite the drip-drip-drip of information and all of the smoke, the FBI, Special Counsel Robert Mueller and congressional investigators couldn’t prove that there was actual collusion. And indeed, he was right. There hasn’t been a single piece of paper produced or a single witness interviewed that proved beyond a reasonable doubt that Trump campaign officials worked with the Kremlin to tip the scales against Hillary Clinton.

RELATED: Get ready to hear the word “collusion” another billion times this week

Donald Trump Jr. may dismiss his 20-30 minute meeting with a Russian lawyer in June 2016 as a worthless encounter that took up his time and didn’t result in any useful information. But his attempts to downplay what occurred that day are juxtaposed by the mere fact that the meeting happened to begin with — that Donald Jr., perhaps not understanding that acquiring damaging political information from a foreigner close to the Kremlin was a stupid idea, believed that the promised intel would be so hurtful to Hillary Clinton’s campaign that he just couldn’t say no to the offer.

If Don Jr. had no idea where the information was coming from or the identity of the person he was meeting with, he’d have a better case to make. But, as the email chain disclosed by the New York Times today makes quite clear, this wasn’t the case. After hearing that the information was “very high level and sensitive” and “part of Russia and its government’s support for Mr. Trump,” Don had no second thoughts about whether it would be smart to take the meeting. “I love it,” is not exactly a response that a cautious person would make. And indeed, this entire episode shows that Don Jr. is about as cautious as his father.

The defense that the White House and Trump’s team of attorney’s will inevitably make is that Don Jr. didn’t do anything wrong. All he did was agree to talk to somebody in person that was referred by a past business associate and family acquaintance. He broke no ethical boundaries, he didn’t violate any laws in the U.S. criminal code, he isn’t experienced with how presidential campaigns are run and therefore he didn’t collude with the Russians. In effect, it’s the classic “he’s too stupid to know any better” defense, the same defense that some Republicans on Capitol Hill have used to explain away President Trump’s tweets, his disclosure of classified information to the Russian Foreign Minister in the Oval Office and his inability to push through a legislative agenda. It goes without saying that it’s a crappy defense, the type used by allies who have run out of any other options.

RELATED: Donald Trump Jr.’s judgment is in serious question after he met with that Russian attorney

Why Don “Fredo” Jr. would think that it’s OK to discuss the U.S. presidential election, let alone accept a batch of documents, from a Russian lawyer who has represented pro-Kremlin individuals and businesses in the past, is unfathomable to comprehend.  It’s goes against common sense. It doesn’t take twenty years of experience in the world of politicking and campaigning to realize that working — colluding — or attempting to collude with a foreign power to impact an American election is outside the realm of what is normal or acceptable. It’s one of those things that should be known right off the bat, like looking both ways before crossing the street, not hanging out in a crime-infested neighborhood at night and not laughing at a funeral. These are things one is taught at a young age — in fact, these things are so obvious that you don’t need to be taught this stuff.

So far, President Trump’s only defense is that he wasn’t involved in his son’s meeting and didn’t know anything about it. Look to see the president’s staff in the future put as much distance between the White House and Don Jr. as possible. 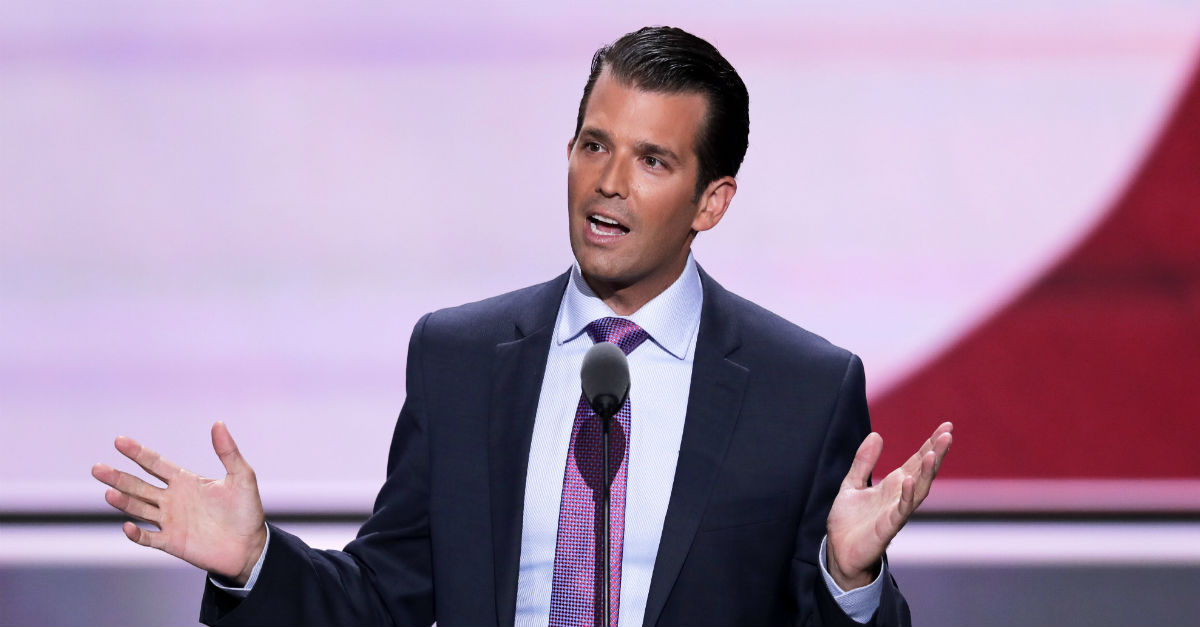