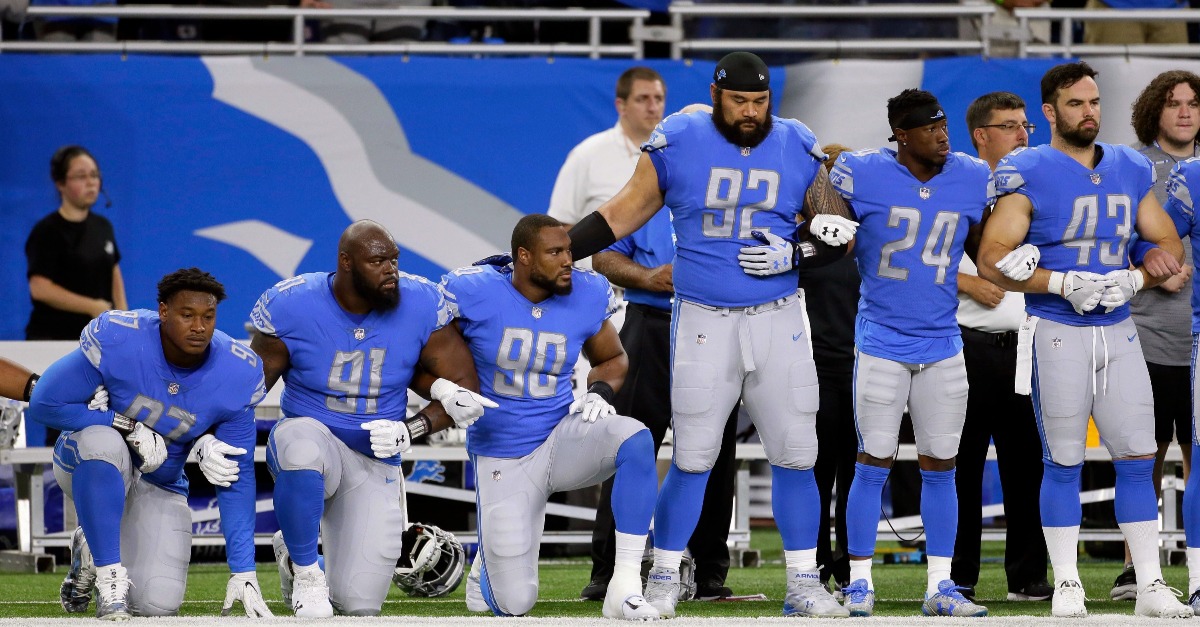 Plenty are shouting ?racist!? and ?un-American!? but there?s also no lack of nuanced hot takes exploring the issue from every possible angle. This piece is no different. I?m not claiming to be the last word. Instead, I want to dissect one aspect of this debate that I find particularly disturbing.

The players who chose to take a knee last Sunday after President Trump called them ?sons of bitches? during an Alabama political rally gave two reasons for their actions: solidarity with their teammates against Trump?s bullying and opposition to racism. The most common motive ascribed to them by others, however, has been disrespect for the flag, the nation and the troops, even in the face of an official Seattle Seahawks? statement that the team chose to take a knee ?[o]ut of love for our country and in honor of the sacrifices made on our behalf.?

Sen. Ted Cruz (R-Texas) expressed the frustrations of many when he posted a tweet calling the protesters ?rich spoiled athletes.? (As a side note, he totally had enough characters left to put the comma between ?rich? and ?spoiled.?)

RARE POV: Be thankful for the freedom to disagree, even if its expression is offensive

Saying that professional athletes make way too much money is like saying there are too many ads on TV: it?s a social criticism no one could possibly disagree with. The question isn?t whether they deserve to make so much — the free market has clearly decided they do — but why their decision to protest, plus their occupation, plus their wealth, makes them ?spoiled.?

The unstated premise is a dangerous one. When we call NFL players ?spoiled,? we?re implying an individual has no right to criticize a country in which he has been financially successful.

But that doesn?t explain it. After all, Thomas Jefferson and George Washington were both millionaires, and nobody?s saying they should have kept their mouths shut. Wealth doesn?t equal a lack of genuine political grievance. The well-off founding fathers truly were taxed unfairly and Seahawks player Michael Bennett really did experience police brutality in Las Vegas — and even if they didn?t, isn?t it noble to try to protect others from injustices from which you yourself are shielded? Although America was good to President Trump, he criticized it savagely while claiming to love it on the campaign trail and his supporters hailed him as a true patriot.

RARE POV: Refusing to stand for the National Anthem doesn?t unify anyone

The last piece of the puzzle, then, is the idea that athletes have no right to speak out politically, not only because they are rich but also because they don?t have ?real jobs.? Society sees fit to pay them millions of dollars to play a game, so they should shut up and be grateful.

The problem with this (understandable) attitude is that it treats these athletes not as individuals, but as commodities.

Every NFL player, regardless of race or political stance, has a conscience and a desire for justice. We can call their causes or actions misguided but we cannot call that desire wrong or unpatriotic. When we say, like Cruz, that ?rich spoiled athletes? have no right to protest, we imply their insistence on ensuring justice for every American is greedy and they should be content with whatever scraps society deigns to throw them.