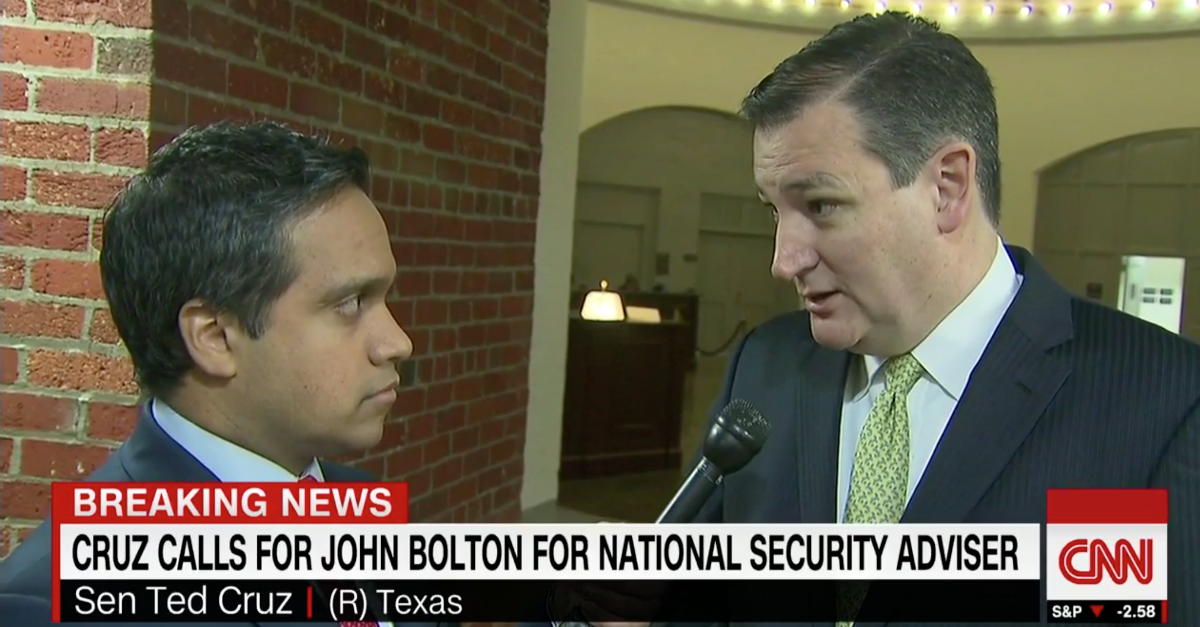 Sen. Rand Paul wrote in a Rare op-ed in November, “No man is more out of touch with the situation in the Middle East or more dangerous to our national security than (John) Bolton.” That’s a pretty damning statement.

“One person I think would be very, very strong is John Bolton,” Cruz said of Bolton, who he thinks should replace the recently-resigned Michael Flynn.

These statements don’t jibe. Either Paul or Cruz is wrong about Bolton.

.@tedcruz tells @mkraju that John Bolton should get the nod for the vacant National Security Advisor job https://t.co/PpKyty1hah

This is the same Ted Cruz whose use of the “neocon” once deeply worried, well, neocons. It’s the same Cruz who once said, “I don’t think it is our job to engage in nation-building.” Never mind that Bolton has been an advocate for virtually every U.S. intervention of the last decade and a half, including the long, nation building Iraq War, which Bolton still defends.

Apparently viewing Bolton’s career through some bizarro world lens, Cruz says of the former U.N. ambassador, “I think he has demonstrated an understanding that we should be reluctant to use military force. That we should do so only when absolutely necessary.”

No, he hasn’t been reluctant, Ted.

Bolton has always been eager to use military force. In Iraq. In Libya. In Yemen. He seems to want war with China. He has the same belligerence toward Russia. He thinks we should never leave Afghanistan, and even once seemed to want war with Cuba way back in 2002.

Please look up “reluctant” in the dictionary Sen. Cruz.

As Sen. Paul observed in his op-ed, “Bolton is a longtime member of the failed Washington elite that Trump vowed to oppose, hell-bent on repeating virtually every foreign policy mistake the U.S. has made in the last 15 years.”

So why would Cruz pretend Bolton is something he’s not?

One possible reason is to further ingratiate himself to billionaire Republican donor Robert Mercer who spent millions to elect Cruz president in 2016, and who has also been the top donor to Bolton’s Super PAC.

But whether Cruz’s support for Bolton is mere opportunism or not, the senator’s characterization of Bolton as sober and war reluctant does not reflect reality – and more importantly, does not jibe with Trump’s own rhetoric on what constitutes an “America First” foreign policy.

Trump spent the entire election attacking Hillary Clinton for being too hawkish in Iraq, Libya and Syria. Bolton, on the other hand, doesn’t think Clinton is hawkish enough.

“President-elect Donald Trump campaigned on changing our disastrous foreign policy,” Paul wrote in his op-ed opposing Bolton for a State Department position. “To appoint John Bolton would be a major first step toward breaking that promise.” Indeed it would.

Why would Cruz want a national security adviser who might convince President Trump to break his promise? Why would Ted Cruz blatantly pretend John Bolton is something he’s not to make that case?