On September 11, 2001, I was sitting in my sophomore year chemistry class at a Catholic high school in Ohio. At the time, I was unaware of the impact 9/11 would have on my life, but as I faced the specter of post-secondary plans, it kept bubbling up. It influenced many of my major academic choices during college and by the time I turned 23, I had lived in Egypt, Syria, and Jordan to study the Arabic language, and had travelled to Lebanon, Palestine, Oman, the United Arab Emirates, India, and Turkey.

When I finished my degree, America had long been at war in both Iraq and Afghanistan. In early 2010, I stepped into the fray when I landed my first “real” job—a contract position with U.S. Central Command analyzing violent extremist ideology and propaganda. For some time, I was lost in the confusing vortex of religious rhetoric employed by al-Qaeda’s propagators (and predecessors to ISIS’ even more effective manipulators), unable to place an analytical framework on what I was observing.

Then I came upon a compass—the teachings of traditionally trained Islamic scholars.

I participated in a short but rigorous training in the basics of Islamic law taught by Muslim jurists. Soon the stereotypes I heard during the years following 9/11 fell away.

No, Islamic criminal law is not a static code inevitably requiring literal interpretation and implementation in today’s modern world. No, Islam does not encourage revolution and violent disobedience.

Most importantly, however, I learned from those Islamic scholars the value of deference to those who have more knowledge and experience on a given topic than me. This principle is a hallmark of Islamic teaching, and one that groups like al-Qaeda and ISIS shamelessly sidestep and ignore in their propagation of principles they claim justify taking the lives of innocent people.

I think about the lesson of deference often these days. Though the United States is famously and righteously a pillar for the promotion of individual thought as enshrined in our First Amendment, I fear our pursuit of a no-holds-barred individualistic society has allowed us to forget the importance of deference to others, and specifically to those better informed than us on matters we know little about.

By the time I eventually left the Central Command position to attend law school in the fall of 2013, my colleagues and I were more versed in Islamic doctrine, rhetoric, and polemics specifically related to the use of violence than the vast majority of Muslims and non-Muslims alike. We looked violent Islamist ideology dead in the eye day in and day out, and we knew that a simplistic analysis built on the inevitability of conflict between Muslims and America was precisely the result for which Al-Qaeda and ISIS salivated. Bin Laden and Baghdadi could ask for nothing more enticing to place on their recruitment banners than a narrative of “the West” versus Islam.

As I ponder the expansive distance between Islam as Muslims know it, and the demonized Islam we see in American political discourse, I see the real danger of the war on terror, beyond its obvious practical considerations of expense, difficulty, and indefinite duration. No, far more perilous are its byproducts: fodder for American conspiracy theorists, propagandists, and demagogues, and the justification it provides for further violence by ISIS and its followers.

It is a never-ending vicious cycle.

Today we see the results of that dangerous mix—Donald Trump, who unabashedly questions American Muslims’ loyalty, is one election away from exercising control over armed Predator drones, nuclear missiles, and the powerful intelligence-gathering assets within the executive branch. His closest Republican competitor, Ted Cruz, felt similarly about treating Muslims as a suspect class. While apparently not motivated by bigotry, Hillary Clinton’s incessant highlighting of Muslims’ usefulness in the war on terror fails to acknowledge Muslims’ positive contributions to everyday American society. And, of course, there are far too many spiritually depraved Muslims who—for a variety of usually very personal reasons residing firmly outside the realm of religion—have decided to make their final acts on this earth a slaughter of innocent souls, a slander of the religion, and an easy catch for Islamophobic inciters.

In the aftermath of Orlando, as I catch glimpses of the mainstream media coverage, my Facebook feed, and other sources, I hear panicked voices reacting with sometimes subtle, but nonetheless clear, generalizations about what violence Islam must promote and about why it is so important we refer to our enemy as “radical Islam.”

But if you look out into society, you don’t find the most thoughtful among us apportioning blame to specific religious groups. Rather, the most respected leaders of faith communities across America have already condemned the hate and homophobia that lies behind the Orlando attack, knowing full well that ill-treatment of the LGBT community is a disease that finds quarters in all our communities, and is not distinct to any one group. These leaders include Catholic bishops, Jewish rabbis, Muslim leaders, and many others.

We must defer to these leaders and refrain from conjecture, no matter how tempting. And in the wider discussion about countering terrorism, we must defer—to those who uprooted their lives after 9/11 to seek answers, to those who have studied the ideological underpinnings of violent extremists’ platforms, to law enforcement who require time to piece together the true psychological motivations behind a terrorist’s actions, and to respected academics across this country who think about these issues, not in the hours and days after a horrific attack when emotions control, but in all the intervening times when sober analysis yields much more accurate results.

We live in an age of nearly absolute access to information, yet reliable sources are scarce. At this moment in history, more non-Muslim Americans must confront the question of “what is Islam, truly?”

You must not let your research be limited to your independent Google searches or the “native informants” frequenting Trump-friendly platforms such as FOX News. To go only that far is to not ask the question at all.

As a college student, I was privileged to live in Muslim-majority societies at peace, where I was hosted and protected by the people around me. I am also connected to the American Muslim community through friends and family, and I worked with many Muslims at Central Command who exhibit the pinnacle of American patriotism. This exposure happened because I dared to step outside of my upbringing in a homogenous suburb and seek answers to the questions swirling in my head after 9/11. As a result, I know Islam and Muslims are not the Trojan horse that Trump would have you believe. You too can see this for yourself if you simply approach a Muslim and strike up a conversation about sports or whatever it is you are interested in, or go to your local mosque to have your theological and cultural questions answered.

In the final analysis, I am not suggesting you take as your only input my suggestions, impressions, and conclusions about the way forward after a man pledging allegiance to a group of violent Muslim extremists murdered out of apparent homophobia.

What I am suggesting is that Americans slow down, take a breath, and realize that an atmosphere of constant paranoia and hysteria has detrimental long-term effects. We must rediscover our capacity for critical dialogue and inquiry. If we don’t, our children will grow up in this toxic environment and some of them will perpetuate it.

I find hope in the insistence by many members of the LGBT community that increased Islamophobia not be the result of the Orlando attack. Surely this wisdom can come only from the hard-fought experience of facing life in American society where minorities’ interests are often trampled.

America, we need to find a more civilized dialogue. We need to question the prominent narratives. We need to reassert our respect for the realm of religion—all religions—even if we do not personally partake in any of them or are partial to only one of them. We need to respect one another regardless of the groups to which we are attached—gay, Muslim, or otherwise.

We need to defer to each other a lot more often.

Tony Busch is a former Arabic social media analyst at ConStrat, a communications firm based in Washington, D.C. Tony holds an Arabic language certificate from the University of Damascus in Syria and performed nearly four years of online social network analysis for the Department of Defense.  He’s also a graduate of the Washington University in St. Louis School of Law. Tony previously published in The Atlantic and The Descrier. 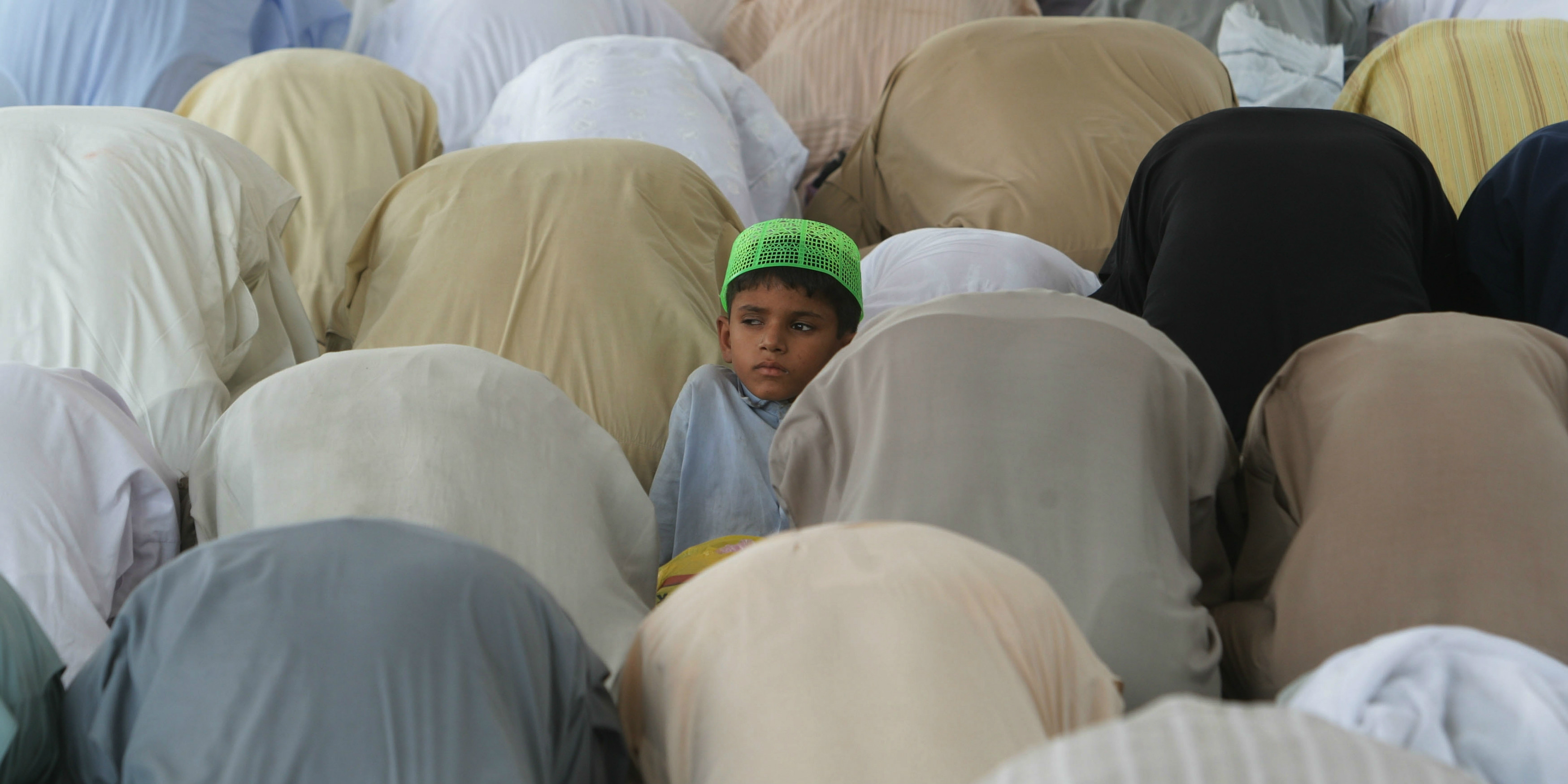