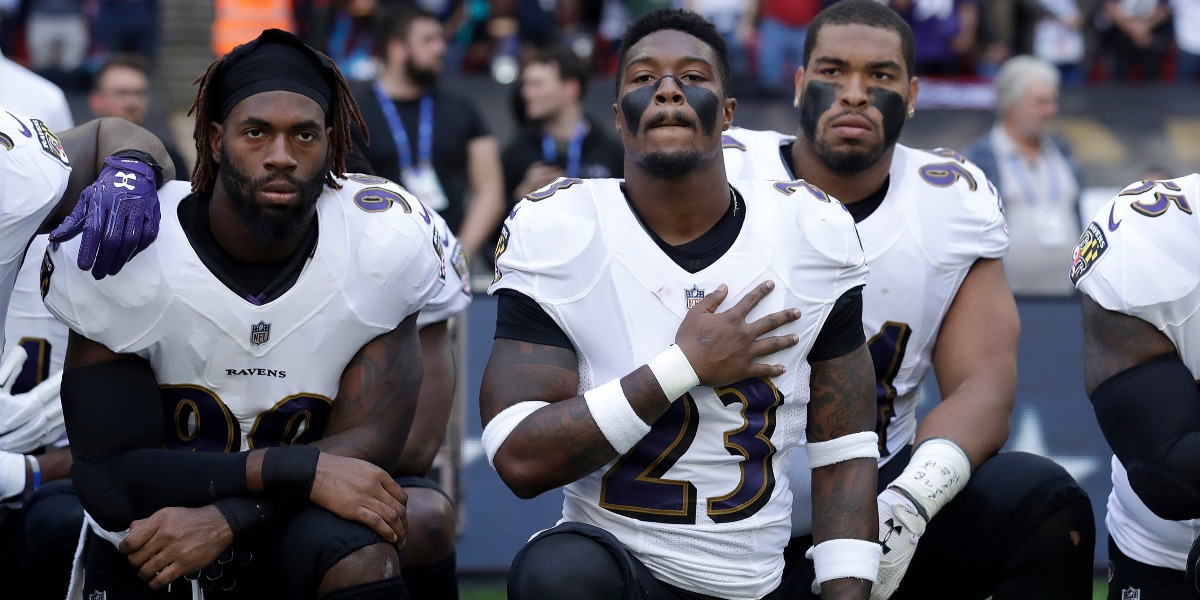 When President Trump launched his critique of pro athletes — such as former San Francisco 49ers quarterback Colin Kaepernick, who silently protest police brutality and systemic racism by taking a knee during the national anthem — he spoke with typical bombast.

“Wouldn’t you love to see one of these NFL owners, when somebody disrespects our flag, to say, ‘Get that son-of-a-bitch off the field right now?'” Trump said at an Alabama rally Friday evening. The president went on to argue that such protests are hurting NFL ratings and “ruining the game” of football.

Trump continued in this vein on Twitter over the weekend and into Monday morning, issuing no fewer than 17 sports-related tweets and retweets as of this writing. These two were the most important of the lot:

If a player wants the privilege of making millions of dollars in the NFL,or other leagues, he or she should not be allowed to disrespect….

…our Great American Flag (or Country) and should stand for the National Anthem. If not, YOU'RE FIRED. Find something else to do!

Why those two? Because of the phrase “should not be allowed.”

Treasury Secretary Steven Mnuchin went on ABC News Sunday attempting to spin that phrase into a simple recommendation of an NFL policy update. Free speech is not at issue here, he argued; it’s just about the NFL needing to make a new rule for player conduct.

“The NFL has all different types of rules. You can’t have stickers on your helmet; you have to have your jersey tucked in,” Mnuchin said. “I think what the president is saying is that the owners should have a rule that players should have to stand in respect for the national anthem.”

Sec. Mnuchin to @MarthaRaddatz: "It's not about free speech." NFL players "can do free speech on their own time." https://t.co/vkSBFbgFz4 pic.twitter.com/0k0yRYTuus

Now, Mnuchin is perfectly right that the NFL could make such a rule without running afoul of the First Amendment. The NFL is a private organization and it could indeed prohibit employees from engaging in visible political protest while at work. The free speech protections in our Constitution are about preventing government infringements on speech, not interfering in private employment contracts.

Of course, whether the NFL could make the rule Mnuchin describes is not the same as whether it should. In this case, morality and marketing are both weightier considerations than legality.

Where Mnuchin is wrong — and either willfully deceptive or grossly ignorant for a man in his position — is in his conflation of the NFL’s ability to set such a rule on one hand, and Trump’s advocacy of it on the other.

This distinction is huge. The NFL making a rule doesn’t violate the First Amendment. Trump as president pushing for it is at least deeply suspect. Presidential comments and tweets aren’t federal policy, true, but can anyone argue with a straight face that the president telling you to shut up about politics won’t have some chilling effect on free speech?

Pro athletes have the financial and therefore legal resources to keep exercising their First Amendment rights without much fear of reprisal. But it isn’t hard to imagine the president’s comments scaring others who aren’t so fortunate into silence.

An NFL ban on anthem protests and Trump demanding a ban are two very different things. There is an enormous difference between a private organization making a rule about employee behavior at work and the foremost representative of the federal government acting in his official capacity as president to recommend suppression of Americans’ free speech.