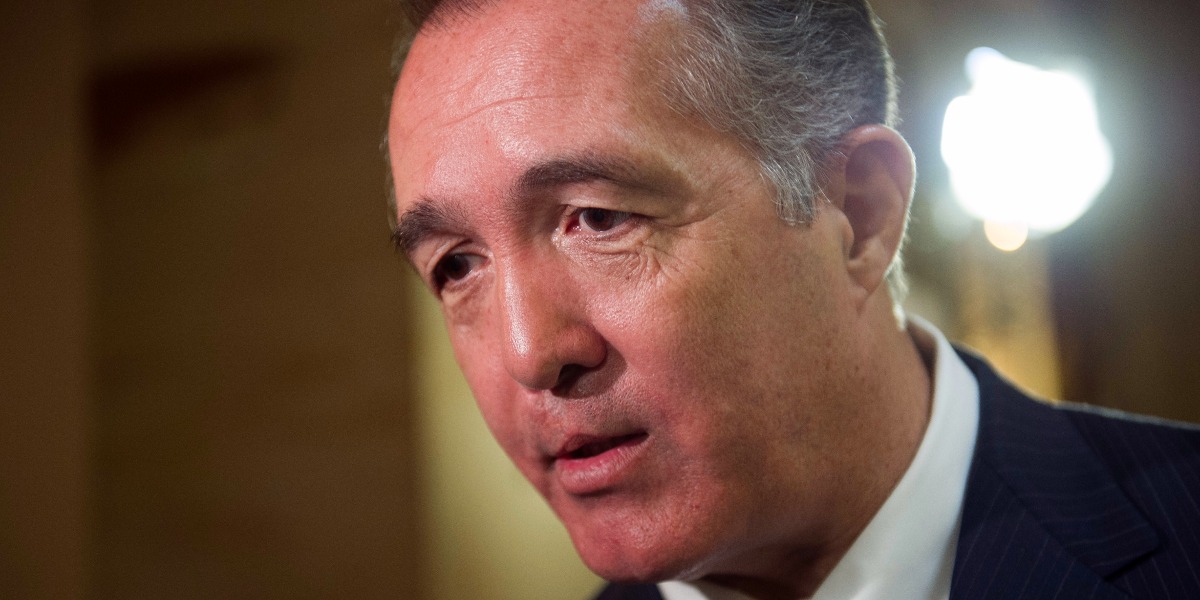 AP Photo/Cliff Owen, File
FILE - In this March 24, 2017, file photo, Rep. Trent Franks, R-Ariz. speaks with a reporter on Capitol Hill in Washington. Franks says he is resigning Jan. 31 amid a House Ethics Committee investigation of possible sexual harassment. Franks says in a statement that he never physically intimidated, coerced or attempted to have any sexual contact with any member of his congressional staff. Instead, he says, the dispute resulted from a discussion of surrogacy. Franks and his wife have 3-year-old twins who were conceived through surrogacy. (AP Photo/Cliff Owen, File)

While Conyers and Franken both faced credible accusations of groping and sexual harassment, Franks became the latest casualty of our great societal purge because he asked two of his female staffers if they would act as a surrogate for him and his wife.

In Franks’ initial statement, issued Thursday just hours after Franken’s resignation speech, Franks announced he planned to leave Congress at the end of January. But the next day Franks said he would resign effective immediately after his wife was admitted to the hospital due to an “ongoing ailment.”

RELATED: Al Franken makes his choice after his colleagues ask him to resign over sexual misconduct

There are certainly some things to be concerned about in this story. According to a report by MarketWatch, the average cost of surrogacy—a process in which sperm from the father is used to fertilize one of the mother’s eggs, which is then implanted in the surrogate’s uterus to be carried to term—is between $98,000 and $140,000. Franks, whose net worth is over $30 million, at one point offered a female staffer $5 million to act as his wife’s surrogate. This willingness to overpay by a factor of up to fifty rather than simply contact a surrogacy agency, coupled with his repeated requests, suggests Franks may have had an unhealthy fixation on these staffers.

There’s also the troubling allegation that, after rebuffing Franks, one of the staffers felt she was the victim of professional retaliation, receiving fewer assignments and less access to the congressman.

Alongside these red flags, however, was plenty of ridiculousness, both in the situation itself and in the media reaction to it. A story published by Politico suggested that the female staffers in question were “concerned that Franks was asking to have sexual relations with them” and that it “was not clear to the women whether he was asking about impregnating the women through sexual intercourse or in vitro fertilization.”

This concern on the part of the women suggests a lack of familiarity with what surrogacy is. In his resignation speech, Franks made it clear that his twin children, who he had hoped to give another sibling, were born by “gestational surrogacy” in which, by definition, the surrogate is “not genetically related” to the children.

Picking up on implications is one thing, but willful or negligent misunderstanding is quite another.

And speaking of willful misunderstanding, a writer for New York Magazine drew on Franks’ anti-abortion positions to accuse him of acting like one of the “lordly theocratic impregnators depicted in ‘The Handmaid’s Tale,’” after admitting only a few paragraphs earlier that it is “entirely unclear what about a ‘discussion’ of the issue with female subordinates would make it so highly offensive.”

Franks and his wife have had a long, heartbreaking history of problems with infertility and setbacks in their attempts to start a family by other means. In announcing his resignation, Franks referenced three miscarriages, several planned adoptions that fell through when the biological mother changed her mind, and another attempt at surrogacy that ended in a miscarriage. These traumatic events, coupled with his wife’s ongoing illness, could easily explain the desperation that drove him to offer his staffers too much money too many times.

Asking your employee to serve as a surrogate for you and your wife is a little weird, but we don’t force elected officials to resign for being a little weird. We force them to resign if they’ve abused their power through sexually predatory behavior.

RARE POV: John Conyers steps down… and then insults our intelligence by endorsing his son

Some allegations, like those against John Conyers and Al Franken, are unambiguous. Such behavior is wrong no matter the circumstances. Franks’ case is different. If he truly did make unwanted sexual advances toward these women or retaliate against them for refusing his offers, then Speaker Paul Ryan was right in pushing him to resign.

But the same set of facts can produce an alternate reading in which a husband desperate for children made a somewhat ridiculous proposition to some of his female employees. It’s something I could easily imagine Michael Scott doing on “The Office,” equal parts pathetic and absurd, but certainly not predatory.

I worry that Franks was pushed out not because what he did was bad, but because it looked bad. The #MeToo movement has empowered victims in new and exciting ways, but if it becomes more about optics than about justice, it could easily veer off course.