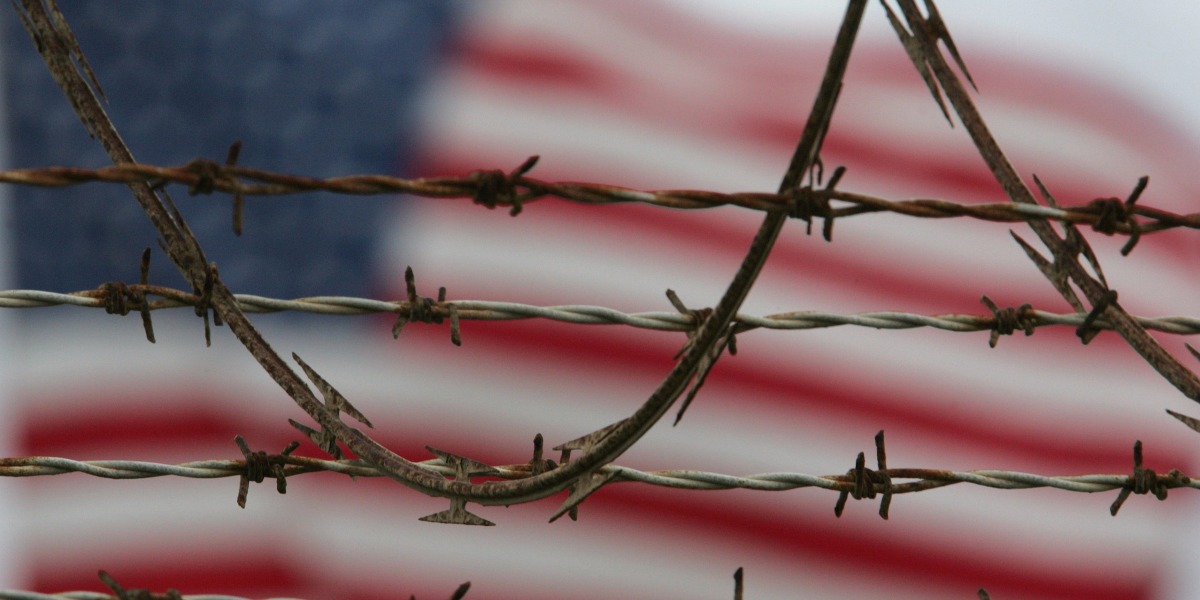 AP Photo/Brennan Linsley
A flag waves behind the barbed and razor-wire at the detention compound on Guantanamo Bay U.S. Naval Base in Cuba, Wednesday, Oct. 10, 2007. The U.S. military is reviewing its decision to classify hundreds of Guantanamo Bay inmates as "enemy combatants," a step that could lead to new hearings for men who have spent years behind bars in indefinite detention. (AP Photo/Brennan Linsley)

At a secret military prison somewhere in Iraq, there is an American citizen locked up ? indefinitely.

We don’t know his name or what exactly he’s accused of doing. The Trump administration says he fought for the Islamic State, but we don’t know what evidence they have to support that claim or what the alleged fighting looked like. Was he on the battlefield? Did he actually harm other Americans? Was he an English-language propagandist, doing more internet outreach than physical violence? Or was he just an amateur journalist who didn’t fight for ISIS at all? (Some online posts suggest that could be the case.)

We don’t know the answers to any of these questions, because the administration won’t say.

It should go without saying this detention is illegal. The Bill of Rights explicitly prohibits our government detaining people without charge or trial. Due process rights apply equally whether the accused is an U.S. citizen or not, but particularly with an American, there’s just no debate: He is guaranteed these rights, and they have not been respected. The detainee has repeatedly requested a lawyer, U.S. officials told the Washington Post, and that request has been consistently denied.

Even if this man were to be tried as an enemy combatant in military court where, for example, there are no Miranda warnings, the government would still have to “prove that the detainee is a fighter for an enemy force with whom the U.S. is in a state of armed conflict,” as the Hill reports. This lower standard of justice also has not been met.

The ACLU found out about this detention and has been pushing for information on, and access to, the man who has been detained. So far, it’s not going so well:

The Pentagon and Justice Department ignored our initial request for access to the U.S. citizen so we could advise him of his rights and offer him the opportunity of legal representation. We then filed a habeas corpus petition on the citizen?s behalf in federal court in Washington, demanding that the government justify its detention of the unnamed American. All U.S. citizens have the right to habeas corpus no matter where the government holds them or what it accuses them of.

The bottom line is that the imprisoned American citizen clearly wants a lawyer and doesn?t have one, thanks to the roadblocks the government itself has put in place.

The government also complains that allowing counsel to have access to the citizen wouldn?t be ?easy.? But constitutional rights do not depend on the government?s convenience.

RARE POV: The Saudi blockade of Yemen is starving kids and killing thousands, so why is Washington still defending it?

There are also several members of Congress investigating, though, again, without much success so far. For now, this detainee is in (il)legal limbo.

Look, it’s perfectly possible this American detained in Iraq is legitimately a terrorist. He may be guilty of truly evil crimes. But he could also be a journalist (or would-be journalist) who made bad decisions and got himself in the wrong place at the wrong time.

That’s what due process rights are supposed to help us determine. That possibility of guilt isn’t a reason to neglect these rights; it’s exactly why we enshrine them in the law of the land. And if the government doesn’t have enough evidence to make a conviction stick, as seems to be the case, the solution is not to throw out the rule of law. It’s to find more evidence or throw out the case.