There are a lot of reasons to be upset about Jeff Sessions, but this Russia thing may not be one of them 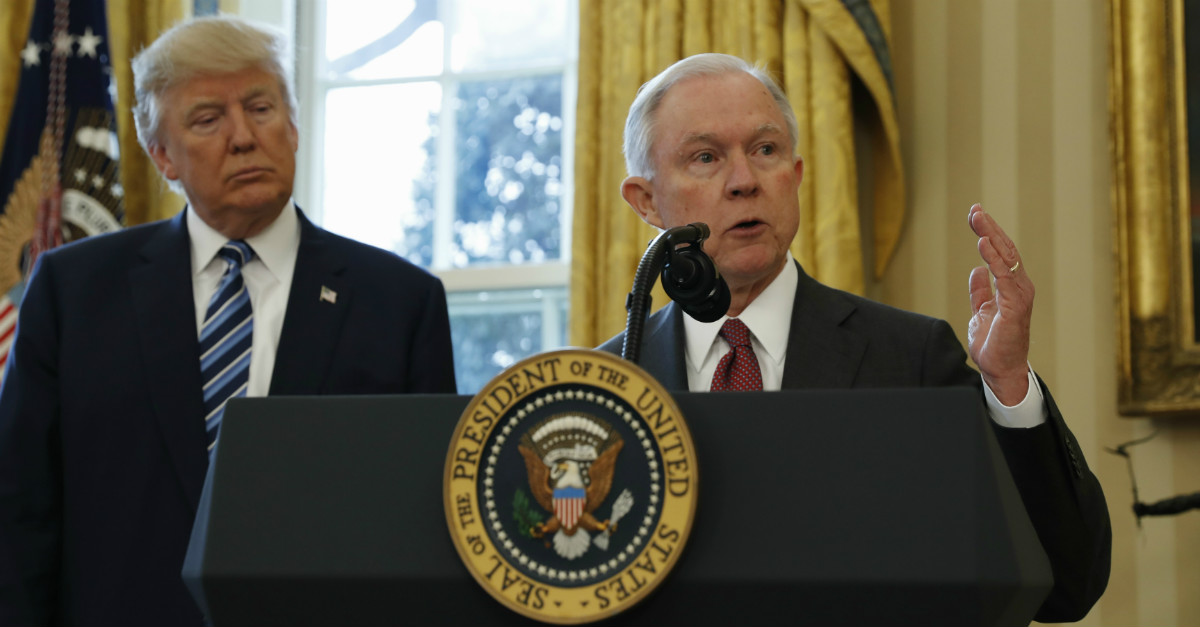 Attorney General Jeff Sessions is, on policy terms, one of the worst additions to the Trump administration. He is the highest judicial official in the executive branch, and his record on criminal justice issues is authoritarian and unethical at every turn.

As I and other writers here at Rare have documented, Sessions is an advocate of civil asset forfeiture, has proven himself willing to lie to further the failed war on drugs, and is unquestionably instrumental in the recent White House announcement of a federal crackdown on states that have legalized recreational marijuana.

In short, my sole hesitation in saying I’d like to see Sessions resign is the risk that someone more averse to individual liberty might take his place.

That brings me to our latest hysteria, which concerns these remarks Sessions made during his Senate Judiciary Committee hearings for the AG role, via CNN:

SEN. AL FRANKEN: “If there was any evidence that anyone affiliated with the Trump campaign communicated with the Russian government in the course of this [2016] campaign, what would you do?,” the Minnesota Democrat asked.
SESSIONS: “I’m not aware of any of those activities. I have been called a surrogate at a time or two in that campaign and I did not have communications with the Russians.”
…
SEN. PATRICK J. LEAHY: Several of the President-elect’s nominees or senior advisers have Russian ties. Have you been in contact with anyone connected to any part of the Russian government about the 2016 election, either before or after election day?” the Vermont Democrat asked in a questionnaire.
SESSIONS: No.

RELATED: It isn’t Trump officials’ communications with Russians that are weird — it’s the cover-up

As it turns out, Sessions did meet twice with Sergey Kislyak, the Russian ambassador to the United States, during the campaign season. Sessions, who was then in the Senate, says both meetings occurred strictly in his capacity as a member of the Senate Armed Services committee, a role in which he regularly met with representatives of foreign governments.

His critics have accused him of outright deception, labeling the incident another piece of the puzzle they already know depicts Trump prostrate before the Kremlin.

Rare’s Matt Purple offered a welcome note of reason in his post on the subject this morning, arguing that a campaign-related conversation between Sessions and Kislyak is “not in itself sinister or even unusual.” Still, Purple asks, “if nothing damaging was said” during the Sessions-Kislyak meetings, why did he fail to mention it before now? Why the cover-up?

But here’s the thing: If Sessions isn’t lying about the nature of his meetings — if they really were performed strictly in his capacity as a sitting senator on a foreign policy-related committee — the cover-up doesn’t exist. If Sessions’ account is right, he didn’t do anything wrong.

Sure, it would have been prudent in the conversations with Franken and Leahy to mention these other meetings, but the senators’ questions very specifically addressed campaign-related contact.

If he was asked "Did you speak to any Russian government person in any capacity in this time frame?" It would be a lie. That wasn't the?

Of course, it is entirely possible Sessions is lying about the content of his two meetings. In that case, there is a lie, and a cover-up, and everyone has every right to be hysterical.

But we don’t know that to be the case, and there are plenty of reasons to find Sessions’ own account plausible. For instance, consider this point from Ben Domenech in his Transom newsletter this morning:

Witness the example of Claire McCaskill, another Senator on the Armed Services Committee, who tweeted forthrightly last night that she has never had contact with the Russian ambassador, that he would only talk to the Foreign Relations Committee. She forgot that she had tweeted twice in the past three years that she was off to meet with or talk with the Russian ambassador — and that’s just the times she tweeted it. http://vlt.tc/2qu6  Perhaps we should investigate that, along with every other attendee at any event who has run into a Russian. That would include a host of Senate Democrats, of course.

Domenech likewise recalls that in his own stint in the office of “then-Junior Senator John Cornyn the flow of ambassadors through his office was constant and routine. Sessions, a long-time member of the Armed Services Committee, would doubtlessly be an even more frequent recipient of such contacts.”

Look, if this dust-up means Jeff Sessions is no longer attorney general, I won’t exactly be crying myself to sleep. But with the evidence we have right now, there is hardly an unassailable case that he is lying about his contact with Russia — and that means this scandal runs the real risk of exhausting finite outrage reserves we will unquestionably need for stuff like, I dunno, the authoritarian agenda of our new attorney general.