There are reasons to be wary of Vice President Pence, but that “he thinks Jesus tells him to say things” is not one of them 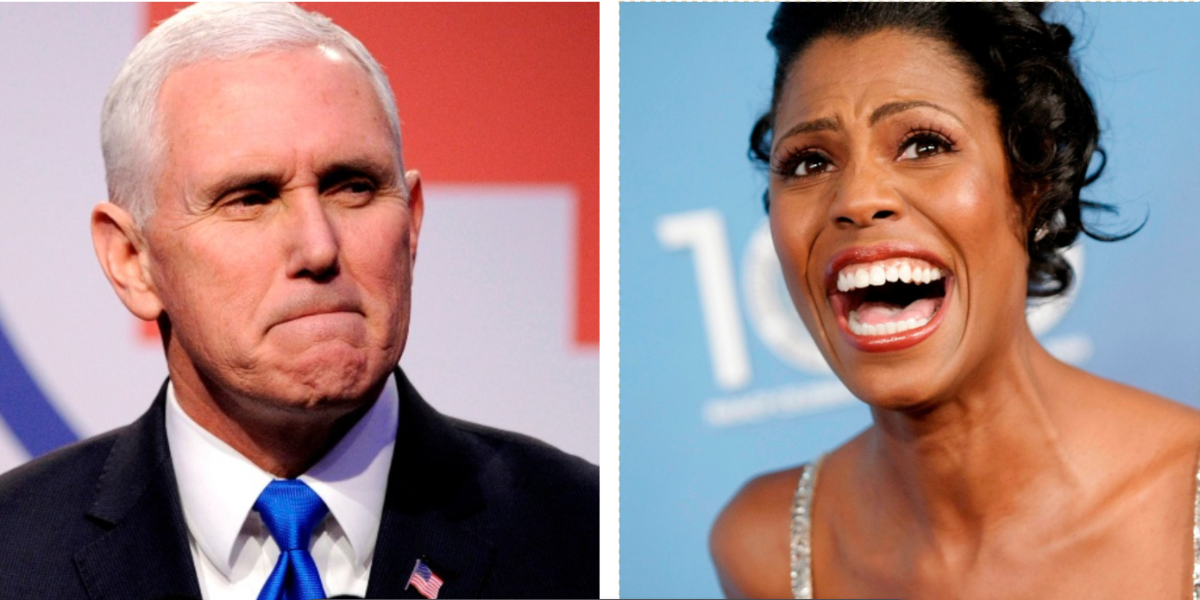 Former “Apprentice” contestant and Trump administration adviser Omarosa Manigault-Newman is now continuing her reality television career on “Celebrity Big Brother,” where she has found talking about the White House is a reliable way to get screen time.

One clip from Monday’s episode saw her warning housemates that however much they dislike President Trump, they should prefer to keep him in office rather than letting Vice President Pence take his place.

Truth, or gameplay? @OMAROSA reveals jaw-dropping details from her time inside the White House tonight. Tune in to #BBCeleb at 8/7c, or stream it live with CBS All Access: https://t.co/HVm9HNeMLQ pic.twitter.com/hC84F8QAOP

“As bad as y’all think Trump is, you would be worried about Pence,” Manigault-Newman said. “Everybody that’s wishing for impeachment might want to reconsider their life. We would be begging for days of Trump if Pence became president, that’s all I’m saying. He’s extreme.”

“I’m Christian, I love Jesus,” she continued, “but he thinks Jesus tells him to say things. I’m like, ‘Jesus ain’t say that.’ It’s scary.”

RELATED: Omarosa told “Big Brother” housemates they should fear a Pence presidency — and here’s why

Manigault-Newman is right that there is cause to be concerned about a Pence presidency, though I’d say whether it would be worse than four years of Trump is debatable. But the problem with Pence is his policies, not his faith.

As I’ve argued at The Hill, Pence is terrible on foreign policy:

An avid supporter of the 2003 invasion of Iraq and a favorite of the Republican and neoconservative establishment, Pence is a hawk’s hawk who voted against any timeline for U.S. troops to come home after ousting Iraqi dictator Saddam Hussein. Where Presidents Obama, George W. Bush and everyone in between now recognizes the role of American intervention in the rise of ISIS, Pence continues to insist that it is some fictional U.S. disengagement which is at fault.

He embraces wholeheartedly a future in which America polices the world — forever — refusing to reorient our foreign policy away from nation-building and toward restraint, diplomacy and free trade to ensure U.S. security.

Likewise, Pence’s dismissal of criminal justice reform advocacy has been callous and petty, and he betrayed his own record on important economic issues to join the Trump ticket. In recent months, he has emerged as a dangerous force for confrontation in the conflict with North Korea, and he’s long been cool with warrantless mass surveillance on American citizens.

I could go on, but suffice it to say Judge Andrew Napolitano’s labeling of Pence a “conservative statist” isn’t unfair.

What is unfair is suggesting that the veep’s religion is “extreme.” There’s nothing extreme about thinking “Jesus tells [you] to say things.” Christians believe God speaks to us. We believe the Holy Spirit sometimes prompts us to do or say something we might not have done or said on our own.

This is not strange or controversial. We have accounts of it in the Bible. Here’s one about the Apostle Paul from Acts 18:

9 One night the Lord spoke to Paul in a vision: ‘Do not be afraid; keep on speaking, do not be silent. 10 For I am with you, and no one is going to attack and harm you, because I have many people in this city.’ 11 So Paul stayed in Corinth for a year and a half, teaching them the word of God.

Scripture is full of stories like this, stories of God speaking to and through his people.

Of course, that is not to say Pence always hears correctly. Probably none of us do. Like anyone, Pence is no doubt tempted to ignore or twist some of the things he hears from God, and I daresay being in his position of power makes that temptation very strong indeed. There may well be things Pence has said in which Manigault-Newman is right to conclude, as she put it, “Jesus ain’t say that.”

But even allowing for those failures, whether deliberate or accidental, the point is Pence is not “scary” for believing Jesus communicates with him and wants to influence his life and choices. There are plenty of good reasons to be wary of a President Pence, but they’re far more about how he would govern the country, not how his faith governs him.