Trump is reportedly thinking about replacing Jeff Sessions with Rudy Giuliani, who could be even worse 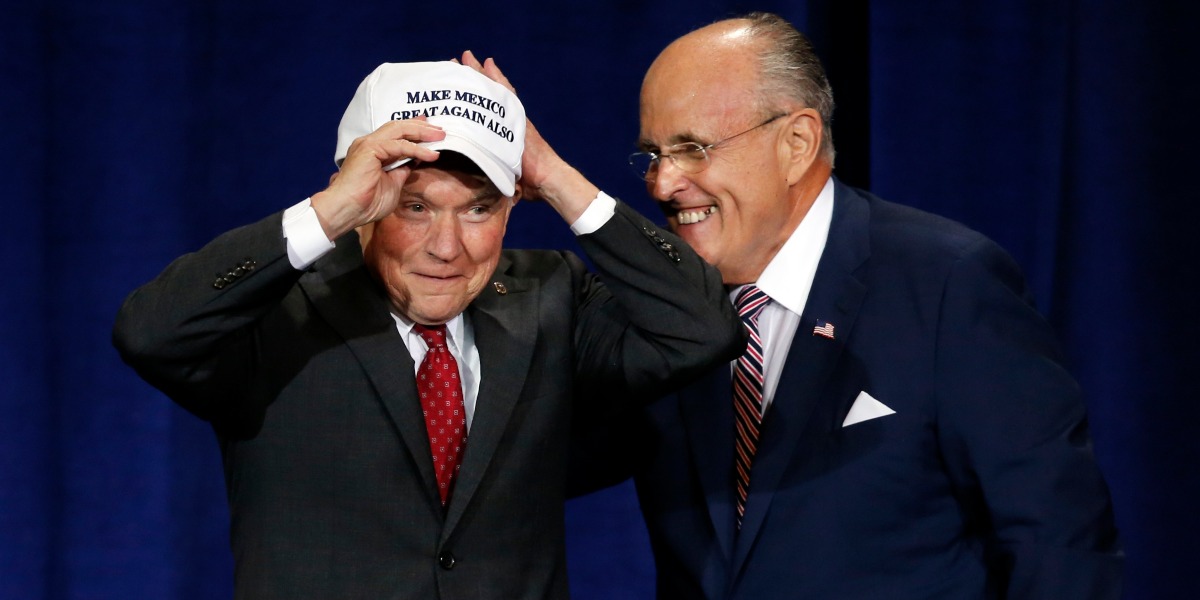 This is a terrible idea.

Upon taking the job, Sessions promised to be the most anti-civil liberties attorney general in recent memory and has not disappointed. On everything from mandatory minimum sentencing to civil asset forfeiture, Sessions has taken a hardline. He wants to punish non-violent, low level drug offenders even more harshly. Sessions wants to broaden cops’ ability to basically steal from citizens, unfettered. It doesn’t matter, apparently, to Sessions that most of the public overwhelmingly opposes his positions including many in his own party. It was reported over the weekend that Sessions intended to start cracking down on states that have legalized marijuana, something Trump has said he would not pursue, and perhaps most importantly that polls consistently show most of America does not want.

But even as bad as Sessions is, there’s a noteworthy distinction between his brand of authoritarianism and Giuliani’s.

Most of Sessions’ antiquated thinking appears to come from seeing himself as a law enforcer, no matter how harmful or dumb those laws might be. If it’s on the books, Sessions is going to enforce it. But Giuliani, who also strikes a tough guy posture, seems less about enforcing laws than explicit fear mongering and even governing by thuggery, irrespective of the law.

Sessions’ authoritarianism seems to stem from the ugliest conception of conservatism. Giuliani’s is more gangster.

Before Sessions took the AG job, the Washington Post’s Radley Balko explained “The terrifying prospect of an Attorney General Giuliani.”

“Giuliani at Justice is an especially troubling proposition,” writes Balko. “This is a man whose career has been marked by prosecutorial excesses, knee-jerk defenses of abusive cops and an affinity for using the power of his political offices to get vengeance on his enemies.”

Balko details Giuliani’s defense of blatant police abuses, how he was the “mayoral architect” of NYC’s controversial Stop and Frisk, his attacks on the First Amendment, and the general brutishness of his administration.

“Giuliani had no qualms about using his power as the mayor of New York to settle personal and political grievances,” Balko notes. “Now imagine Giuliani settling scores ? his and Trump?s ? with the vast resources of the Justice Department at his disposal. He?ll have the FBI. He?ll have an army of U.S. attorneys. And he?ll have virtually unlimited funding.”

The authoritarian Mayor Giuliani happened two decades ago. Last year, Politico’s Kevin Baker made the case that Giuliani has actually gotten worse since. Giuliani also seems more isolated culturally and politically than you might expect a New Yorker of any station to be. Politico’s Glenn Thrush and Sarah Wheaton observed last year:

One longtime friend of Giuliani?s agreed that ‘Rudy still has a lot to contribute’ but said that he?s become more partisan over the years and willing to strip the last veneer of varnish off of his remarks about race, crime and national politics. ‘He?s been out of the game since (his unsuccessful presidential bid in) 2008, so I get the feeling that he?s kind of getting his opinions from Fox now, as opposed to actually being out in the world interacting with people.’

One of the darkest speeches at the 2016 Republican convention was Giuliani’s. As Rare’s Matt Purple wrote, ?War was the theme of last night?s proceedings, and the convention?s evening headliners used it to unleash an endless parade of horribles: cop-killers, Black Lives Matter demonstrators, Iranian mullahs, immigrants, terrorists, immigrant terrorists [?]”

This is not a healthy outlook for anyone, much less someone who could become America’s next top cop. Our country is not a crime-ridden hellhole desperately in need of a strongman, no matter how badly those like Giuliani want us to believe this. Giuliani holds similar positions to Sessions on most issues regarding civil liberties, but brings a new level of fear mongering to the table as well.

When Sessions was named attorney general, civil libertarians of all stripes feared the worst, but probably also knew anyone Trump chose was going to have an authoritarian streak. Chris Christie, who also doesn’t have much use for things like individual liberty and constitutional protections, was also once a consideration.

But even in Sessions’ awful wake, if a resignation and new hire are forthcoming, Rudy Giuliani really could be the worst of all bad choices. Let’s hope we never find out.