Trump says he wants to help the working class, but he once again proved he doesn’t know how 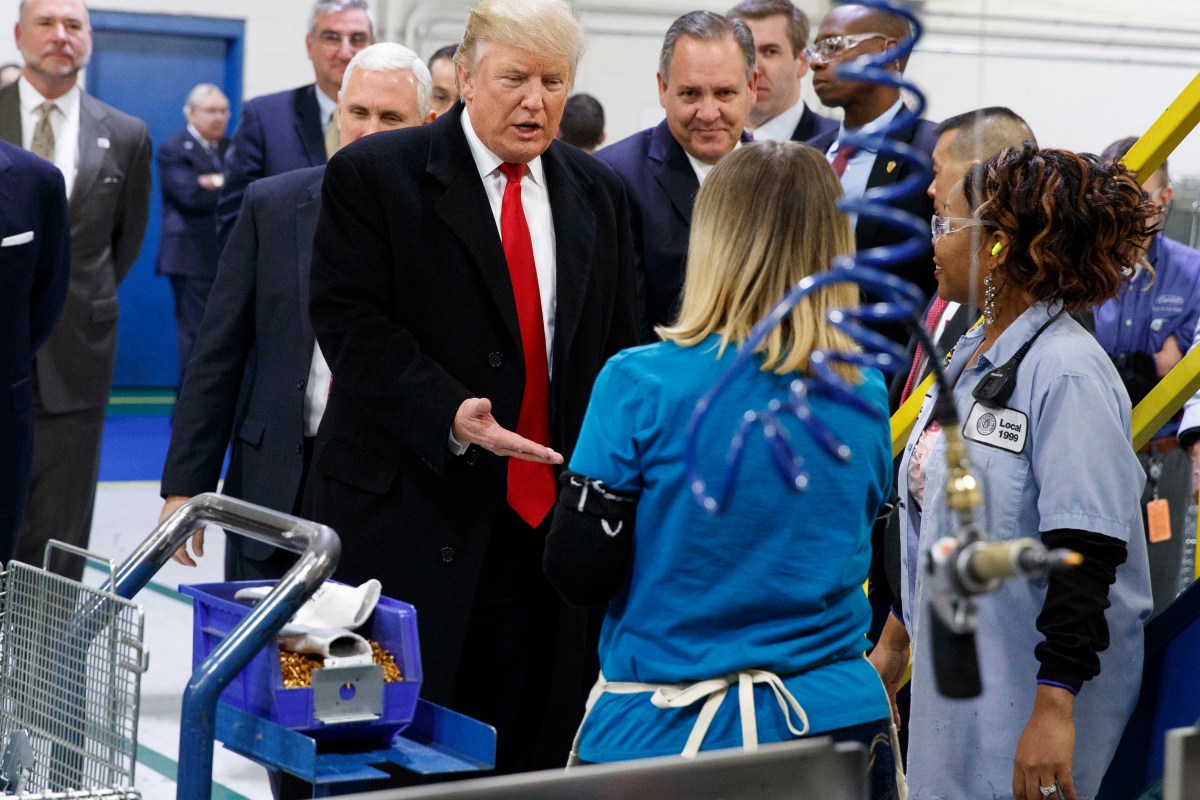 AP Photo/Evan Vucci, File
FILE - In this Dec. 1, 2016, file photo, President-elect Donald Trump greets workers during a visit to the Carrier Corp. factory in Indianapolis. The $7 million deal to save jobs at the Carrier factory in Indianapolis is poised for approval by state officials nearly four months after President Donald Trump celebrated his role in the negotiations with a post-election visit to the plant. (AP Photo/Evan Vucci, File)

Prominent among President Trump’s campaign promises was his enthusiastic pledge of support for American blue collar workers. His vivid depictions of the Rust Belt revived and Appalachia booming are not realistic — not because these regions are eternally economically hopeless, but because jobs like coal mining and manufacturing just aren’t going to come back on the mass scale Trump imagines, as even the coal industry admits.

That enormous improbability of success has led Trump on an unfortunate path as he attempts to make good on his pledge. He has embraced crony capitalism and a sort of soft authoritarianism, in which he tries to personally strong-arm companies into keeping jobs in America.

It’s neither ethical nor successful, though I will concede it seems Trump means well.

With his new protectionist tariffs on imported washing machines, however, Trump has crossed over into actively harming the very American workers he says he wants to protect. He imposed a scaling 20 to 50 percent tax on foreign washers, which will force manufacturers like LG to hike their prices in America.

This is bad news for consumers who can expect to pay about$70 to $100 more for a washing machine. (Full disclosure, I say this as the happy owner of an LG that is loads — pun intended — better than the U.S.-made model that came with our house.)

But the tariff threatens to have far more serious consequences for American workers employed by LG and companies like it here in the States. As Reuters reports, one town in Tennessee may be hit particularly hard:

[Trump’s tariff] threatens to stunt the launch of a new LG Electronics (066570.KS) washing machine factory under construction in Clarksville …

At stake is an appliance manufacturing complex that could eventually employ thousands of workers and which the state of Tennessee and the local community supported with some $23 million in grants. The 310-acre (1.25 square kilometer) site an hour north of Nashville has room for three additional buildings identical to the plant’s $250 million, 600-job first phase.

Trump’s decision to impose 20 percent to 50 percent tariffs on washer imports and parts has local officials asking what his “America First” stands for: supporting all U.S. manufacturing jobs or just favoring traditional American brands over foreign rivals. Labor statistics show that foreign companies have been the source of the majority of new manufacturing jobs since the 2009 recession.

LG told U.S. retailers on Wednesday it would raise prices in response to the tariffs. That could dent its market share, reducing initial output and employment, said company spokesman John Taylor.

“If you lose floor space at retail, it can take years to get it back,” Taylor said.

State and local governments should not have used tax dollars to lure LG to build in Tennessee, but now that they have, that makes the situation even more dire. Because of Trump, people in Clarksville may end up that much poorer and without the new jobs they expected to gain.