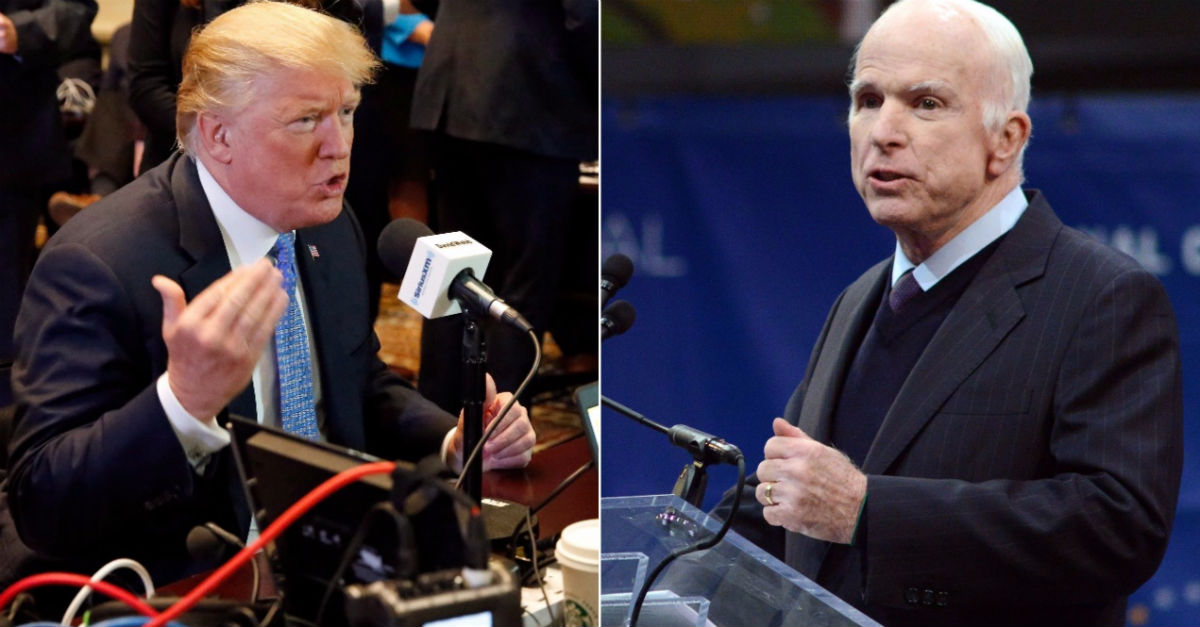 The spat between President Donald Trump and Sen. John McCain (R-Ariz.) is back in the news after a few weeks outside the public eye.

This feud started early in Trump’s candidacy, when McCain criticized him for having “fired up the crazies,” and intensified when Trump suggested that because McCain was captured and held for six years by North Vietnamese forces, he is “not a war hero.” Although McCain has assured reporters that none of his subsequent opposition to Trump’s policies and legislative agenda has been motivated by bitterness over that remark, he did note as recently as last month that Trump has never apologized for it.

RARE POV: 1 in 3 Republicans say unchecked strongman government would be good for America

Since that first exchange, the two have waged an intermittent war of words over a variety of issues. Shortly after his comment about McCain’s POW status, Trump doubled down, calling McCain an “all talk, no action politician who spends too much time on television and not enough time doing his job” (ironic from a president who loves the camera so much he’s never stopped holding rallies). When McCain cast his dramatic Senate vote to kill the Obamacare “skinny repeal” and then put the final nail in the GOP healthcare coffin by refusing to support the Graham-Cassidy bill, the president took to Twitter to accuse him of having “Let Arizona down!”

For his part, McCain has publicly criticized Trump for his decision to pardon former Maricopa County Sheriff Joe Arpaio, the bellicose language he employed in addressing North Korea’s nuclear tests and the vague wording of his military transgender ban announcement.

The most recent iteration of their dispute came after McCain gave a speech Monday at an event in Philadelphia at which former Vice President Joe Biden presented him with the National Constitution Center’s Liberty Medal in recognition of McCain’s decades of service to his country. McCain said:

To fear the world we have organized and led for three-quarters of a century, to abandon the ideals we have advanced around the globe, to refuse the obligations of international leadership and our duty to remain ‘the last best hope of Earth’ for the sake of some half-baked, spurious nationalism cooked up by people who would rather find scapegoats than solve problems is as unpatriotic as an attachment to any other tired dogma of the past that Americans consigned to the ash heap of history.

Chris Cillizza of CNN called the speech “a total and complete takedown of Trumpism” that affirmed values held by “all post-World War II presidents — Republican and Democratic,” placing it in opposition to Trump’s own “America First” foreign policy.

Trump, showing no qualms about threatening a man who has been diagnosed with brain cancer and probably has only a few months to live, warned McCain Tuesday, “[A]t some point I fight back, and it won’t be pretty.”

As the ongoing salvos in the Trump-McCain feud explode across our screens, we once again find that these two men are symbolic of two very different political styles and ideologies within American conservatism.

In the area of foreign policy, we have on one hand Trumpist ethno-nationalism, which has inflamed the forces of xenophobia and elevated white supremacy movements, and on the other, McCain’s neocon vision of global moral leadership and unlimited foreign entanglement and intervention. Both are flawed, and I hope a more peaceful, less racist middle ground can be found.

RARE POV: McCain wants caution before rushing health care. He should do that with foreign policy

Stylistically, the divide is much more black and white. McCain is a moderate who describes himself as a maverick, willing to oppose his own party in the Senate and even consider a registered Democrat as a possible presidential running mate. His rhetoric is seldom inflammatory. On the 2008 campaign trail, he famously rebuked two voters who asked questions about then-Sen. Barack Obama in which they invoked right-wing conspiracy theories about his race and religion. “I have to tell you, he is a decent person and a person that you do not have to be scared [of] as president of the United States,” McCain said. His refusal to demonize his opponent drew boos from the crowd.

Trump, conversely, used fear and paranoia as primary weapons in his campaign. He first rose to political prominence by championing the “birther” conspiracy about Obama’s citizenship that McCain rejected, and he has stoked the fears of the anti-immigrant right that McCain, with his longstanding support for comprehensive immigration reform, has resisted.

It is my sincere hope that one day, when the elements of Trumpist rhetoric have been purged, we will be able to return to a McCain-style discourse.