Donald Trump heads to Paris with the cloud of Don Jr. hanging over his head 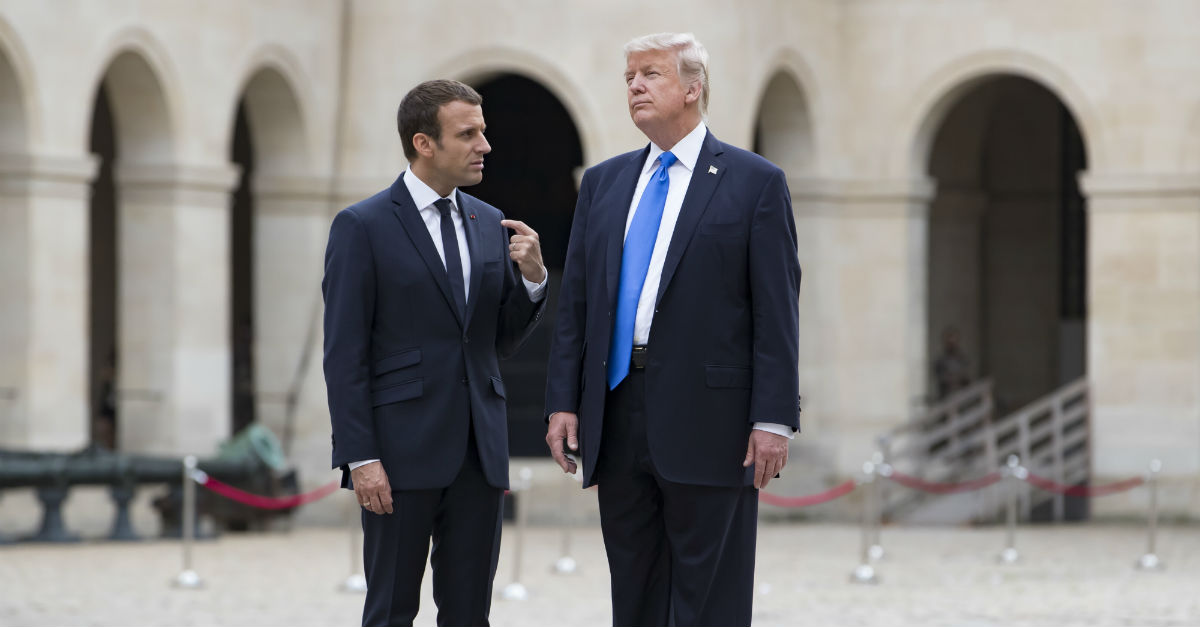 Everywhere President Donald Trump goes—be it Riyadh, Brussels, or Paris—he can’t shake off the Russia scandal that’s swirling uncontrollably in Washington. With his White House staff reportedly at each other’s throats over who ratted out Donald Jr. to the New York Times and a frustrated clutch of lawyers trying to isolate Trump from staffers who are embroiled in the story, the president is walking on eggshells. Everything he says about Russia, even Russia policy, is fodder for television commentators.

Trump’s press conference with French President Emmanuel Macron during his first trip to Paris was no exception. The pair only took a few questions from the press corps, but that didn’t stop the first American reporter who was called on from lobbing questions about Don Jr.

Don Sr., who had been noticeably quiet about his son’s scandal, wasted no time in jumping to his defense. The president referred to his oldest son as a good and honorable young man who was simply doing what any other operative involved in a modern-day American political campaign would do.”I think from a practical standpoint most people would have taken that meeting,” Trump said during the news conference. “Politics isn’t the nicest business in the world, but it’s very standard.”

Nothing to worry about, folks. Don was just doing his job.

Of course, that’s not completely true. While opposition research has long been a central aspect of American campaigns, that information doesn’t normally come from a foreign national who has ties to an adversarial government known to have a diligent and highly skilled cyber-espionage operation. It’s really difficult to see an old-timer who knows the business, a John Podesta or a Karl Rove, eagerly meeting with a Russian government attorney to receive opposition research that may or may not be true. In fact, it doesn’t take a genius to figure out that working with a foreign government—any foreign government—to help or hurt an American candidate is nothing but trouble.

For Trump, the sharp arrows pointed at his son hurt in another way, too. As Senator John McCain stated yesterday, developments in the Russia story are sucking the oxygen out of the room. Nobody in Washington seems to care about anything else, especially the media, whose ratings have been so high over the last year that it would be self-defeating for them to talk about anything else. So when Trump discusses a ceasefire in southwestern Syria that is largely holding or hints that he may be open to working with the French on climate change, reporters either mention it briefly or don’t care. There are plenty of other things going on in the world other than what Don Jr. may have done, yet you wouldn’t know it from turning on the TV.

RELATED: Donald Trump’s speech in Poland was a grenade into the belly of the European Union

The Russia story is in many ways similar to the Monica Lewinsky scandal two decades ago: the press corps is obsessed with it, nothing else in Washington seems to matter, and White House officials go home at the end of the night tired, dejected, and wondering when it all will end. Unfortunately for the Trump administration’s overworked staff, they haven’t discovered how to prioritize and compartmentalize quite as well as Bill Clinton.