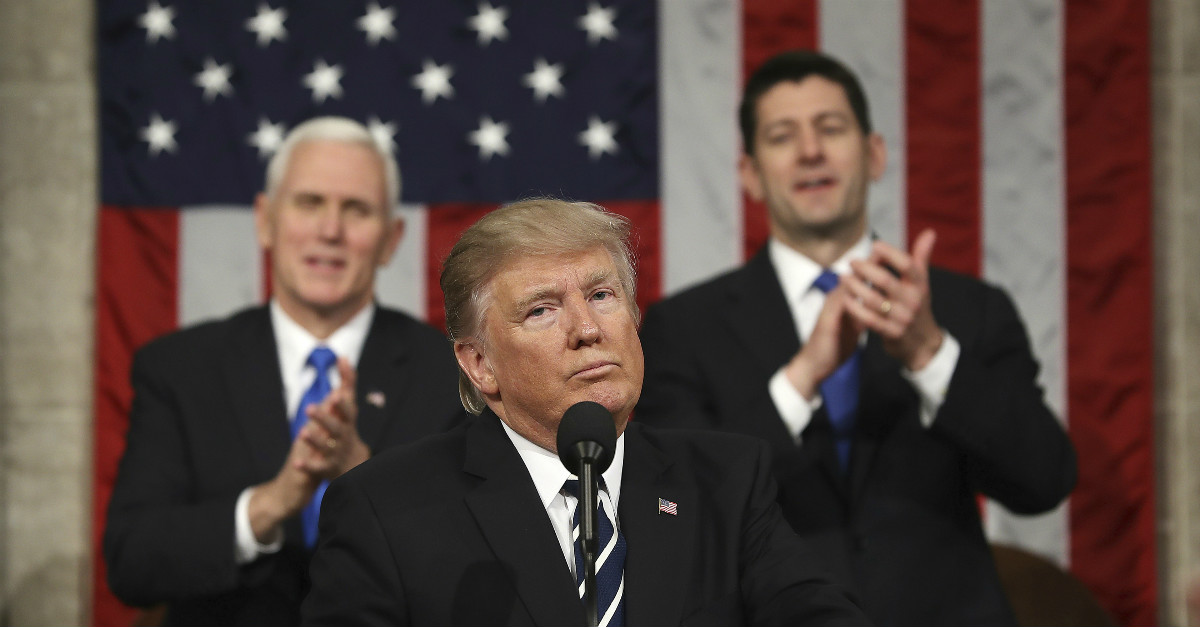 There were a lot of promises piled into President Donald Trump’s first address to a joint session of Congress last night, all of which are likely either to be watered down due to Democratic opposition or buried in Congress altogether.

Repealing and replacing Obamacare is something that all Republicans can agree on, but the party is divided about how quickly that law should be overturned, whether a replacement plan should be passed immediately after repeal, and how a replacement will bring down health care costs.

Trump’s wish for an additional $54 billion in defense spending (on top of the $600-plus billion the Pentagon already receives in the base budget and the $58 billion it gets in off-the-books war funding), an influx of cash that Trump proudly called “one of the largest increases in national defense spending in American history,” is dead on arrival as long as Senate Democrats don’t receive their desired $54 billion increase on the non-defense side of the budget.

Trump’s call for comprehensive immigration reform, reportedly added to the address at the last minute, was a small glimmer of light for moderate Republicans and Democrats who want to finally resolve the problem once and for all. But how much Trump is willing to bend on the legalization issue and whether reform will hurt him politically among the anti-immigration lobby is still unknown.

On education, the president promised what many presidents promise: a school system that works for every child, regardless of where they live and how much money their parents have. Education reform, though, is about as simple as immigration reform or any other sweeping reform in Washington. In short, it ain’t easy.

The big, beautiful wall is still very much on Trump’s mind. “[W]e will soon begin the construction of a great wall along our southern border” he declared, and added that the project “will be started ahead of schedule and, when finished, it will be a very effective weapon against drugs and crime.” But because the Mexican government has refused to pay for it, the White House will need $10-$15 billion in emergency supplement funding to cover the cost, which again provides Senate Democrats with leverage to negotiate for concessions on behalf of their agenda. And that’s assuming that the House Freedom Caucus is willing to swallow an additional $15 billion in deficit spending.

The address to Congress was more about showmanship and stagecraft – two of Trump’s most abundant talents – than the nuts and bolts of “draining the swamp” and reforming the federal government. The White House probably thought the speech would be a good way to start over after an incredibly long month that started one dumpster fire after another. Politico has described last night’s address as a reset, though it’s more like a firehose pouring water on wreckage that is still smoldering. But Trump only gets one speech to a joint session of Congress per year. The next time he sets off a blaze, he won’t have the House podium there to save him.