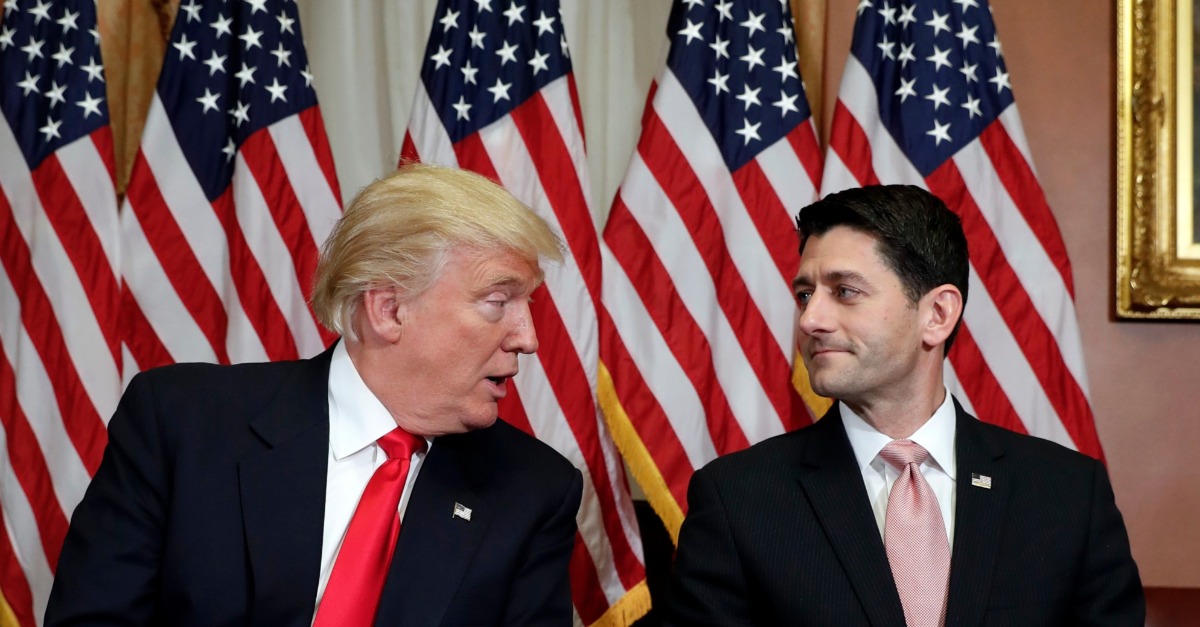 A quote from Donald Trump?s “The Art of the Deal? perfectly encapsulates how keen he is to win the war of ideas rather than satisfy partisans: “What the bulldozers and dump trucks did wasn?t important, I said, so long as they did a lot of it.”

He was describing a stunt he pulled in 1982 when he wanted to pressure Holiday Inn to partner with him and build a casino on a piece of property he owned along the Atlantic City boardwalk. Trump brought in dozens of construction workers, bulldozers and dump trucks to push dirt around on his empty lot all day.

By creating the illusion of preparing his property for construction and a deal with another investor, Trump won over Holiday Inn executives.

That incident is crucial to understanding how Trump leads as president. It’s required reading for Republicans who are still stupefied that he made a deal with Nancy Pelosi and Chuck Schumer last week to raise the debt ceiling and pass Hurricane Harvey relief funds without offsetting spending cuts.

When Trump held a meeting in the Oval Office with leaders from both the Republican and Democratic Party leadership last week, it was a business opportunity — a game, if you will, to see who could pitch the best ideas. Paul Ryan and Mitch McConnell, who have repeatedly failed to repeal and replace Obamacare and struggled to deliver any major legislative wins, argued Trump should trust them to get their own debt ceiling measure passed through Congress.

Pelosi and Schumer, aware of how frustrated Trump has been with the Republicans’ inability to enact his agenda, used the Art of the Deal to leverage victory in the form of an actual legislative success over Ryan and company. While it?s not conservative in nature, it?s what Trump wants most: a win the media will talk about.

As a negotiator looking for the best deal, Trump doesn?t care who he has to work with to get his agenda passed. He’s likely to use this business model throughout his presidency, and that?s a good thing.

There are several big-ticket items that could be passed before the end of the year such as tax reform, DACA, and infrastructure. Trump’s recent collaboration with Schumer and Pelosi should incentivize Republicans to quell their infighting and work together to get conservative measures passed. They have seen firsthand now that he won?t blindly follow their lead.

Two points remain crucial to Trump’s ?war of ideas? model. The first is the fact that Trump?s base remains immovable. A Wall Street Journal/NBC News poll last week found 98 percent of Republicans who voted for Trump in the 2016 primary approve of the job he has done in Washington. A new Rasmussen Reports poll also revealed Trump?s approvals have jumped to 46 percent, a five-point increase from August.

Being able to operate without fear of reprisal from your base is important, and Trump will use it to his advantage.

The second premise for maintaining Trump’s model hinges on the public’s disapproval of Congress. With an average base salary of $174,000 for its members, which is three times the U.S. household median, Americans are increasingly frustrated with lawmakers. And if one is still not convinced the blame for Republican failures will fall on Congress rather than Trump, reports have recently surfaced suggesting Steve Bannon and House Freedom Caucus Chairman Rep. Mark Meadows (R-N.C.) are discussing challenging Paul Ryan for the Speaker of the House post.

If GOP lawmakers want tax reform, the DACA program amended legislatively and other big-ticket conservative items, they are going to have to learn how to win the ?war of ideas? against Democrats.