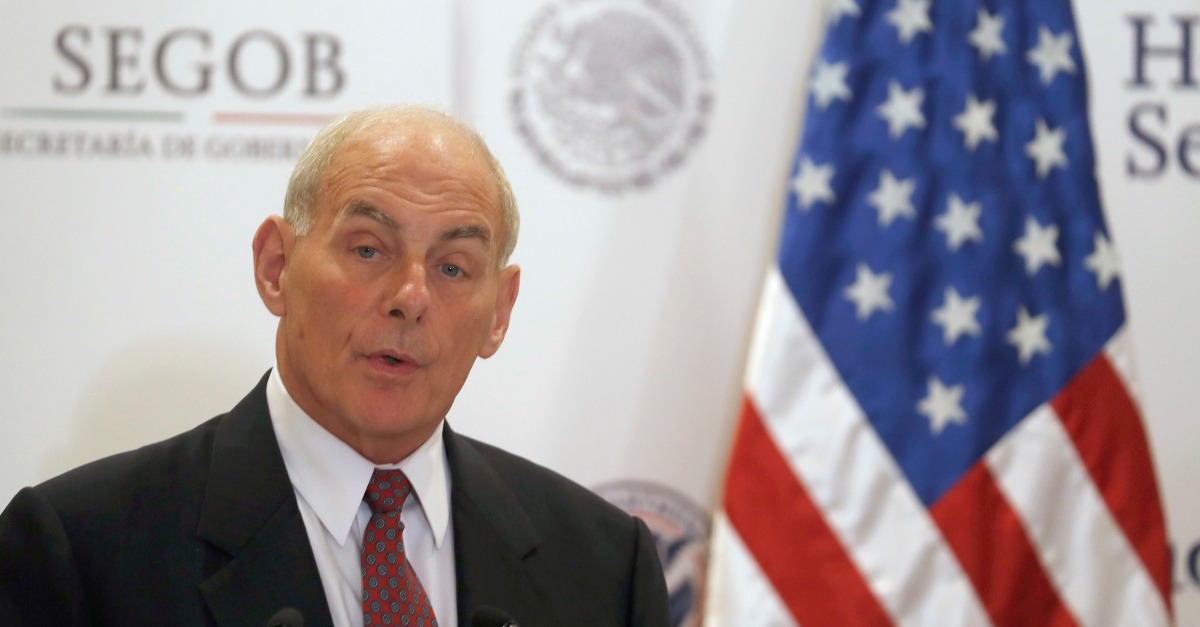 The worst job in Washington, D.C., is now in the hands of a former commander of U.S. Southern Command, former secretary of homeland security and former battlefield commander who has had a long and distinguished career in the U.S. Marine Corps. The replacement of Reince Priebus with John Kelly as White House chief of staff means one thing and one thing only: President Donald Trump is sick and tired of perceived weakness in his top staffers. He wants somebody who will kick ass and clean up the mess.

And the West Wing is indeed a mess – in fact, the word ‘mess’ is too light a term. The Trump administration has been slowly sailing toward a gigantic iceberg. Instigating staff rivalries may be the way Trump chose to run his businesses, but it’s proven an awful management strategy for the United States government.

Therein lies Kelly, who as a military man is used to giving and taking direct orders from a clear hierarchy. There is no such thing as a clear hierarchy in the West Wing, so Kelly will be entering his new job with a staff mistrustful of one another, discombobulated, unable to effectively lobby members of Congress on Trump’s priorities and too often undercut by the president himself. In this kind of environment, anything can happen; the only predictable thing after Trump’s first six months is that there is bound to be unpredictability.

Can Kelly manage an unmanageable West Wing that chewed up and spit out Priebus, reportedly leaving the long-time RNC chairman alone on the airport tarmac? Can he change the culture at 1600 Pennsylvania Avenue? If he wants to succeed, he’ll have to implement these three changes.

RELATED: The Mooch is right that the leaks must stop, but that’s not the White House’s biggest problem

Be Trump’s guardian: One of the reasons Priebus’ job was so difficult was that he wasn’t given the authority to act as a conventional chief of staff. Instead of determining who could access the president, what the schedule looked like and what information flowed to Trump’s desk, Priebus was left sprinting to meetings. He seemed to lose Trump’s respect and confidence when Speaker Paul Ryan pulled the Affordable Care Act replacement bill off the calendar earlier this spring. During the last few weeks, Priebus was reportedly relegated to fly-swatter duty – not exactly a glowing demonstration of his standing in the administration.

Kelly will need to instill some sense of discipline in the ranks. The White House can’t function if staffers spend more time stabbing each other in the back and leaking disparaging comments about their colleagues than advancing the president’s policy agenda. The former general must be the barking dog at the Oval Office door, willing to mete out punishment if someone in the building does something stupid. If Trump isn’t willing to give Kelly that authority, then the staff change may not make a difference.

Mend relations with Republicans on the Hill: The collapse of the Obamacare repeal bill in the Senate last week was the culmination of a bad month for Trump and congressional Republicans. The president’s feud with Attorney General Jeff Sessions, his lambasting of Congress for refusing to get the job done on health care and the less-than-helpful response to the never-ending Russia investigation have persuaded many in the GOP establishment that Trump is a loose cannon firing in all directions. House and Senate leadership have defied the White House on several items, including a Russia sanctions bill that prohibits Trump from suspending sanctions without congressional approval.

Kelly may not be the most politically experienced person in the world, but he’s been around long enough to understand how Washington works. If he can’t improve the GOP Congress-White House relationship, Republicans may go into 2018 with nothing to show for the past two years.

Try to get Trump’s mind off the Russia probe: Let’s be honest: this is probably going to be an impossible task for Kelly. Trump can’t stop thinking about Bob Mueller and how unjustified (in his mind) the entire investigation is.

The first six months of Trump’s presidency have revealed how hard it is for Trump to function and do what he wants for the American people when his head is swimming with all things Russia. Part of Kelly’s job may be to serve as the resident therapist — absorbing Trump’s outrage over Mueller, Rosenstein, Sessions and whoever else crosses him that day. The goal, one would hope, is to get the president to blow off steam so he can concentrate on his legislative agenda. The question of whether he actually will is another matter.