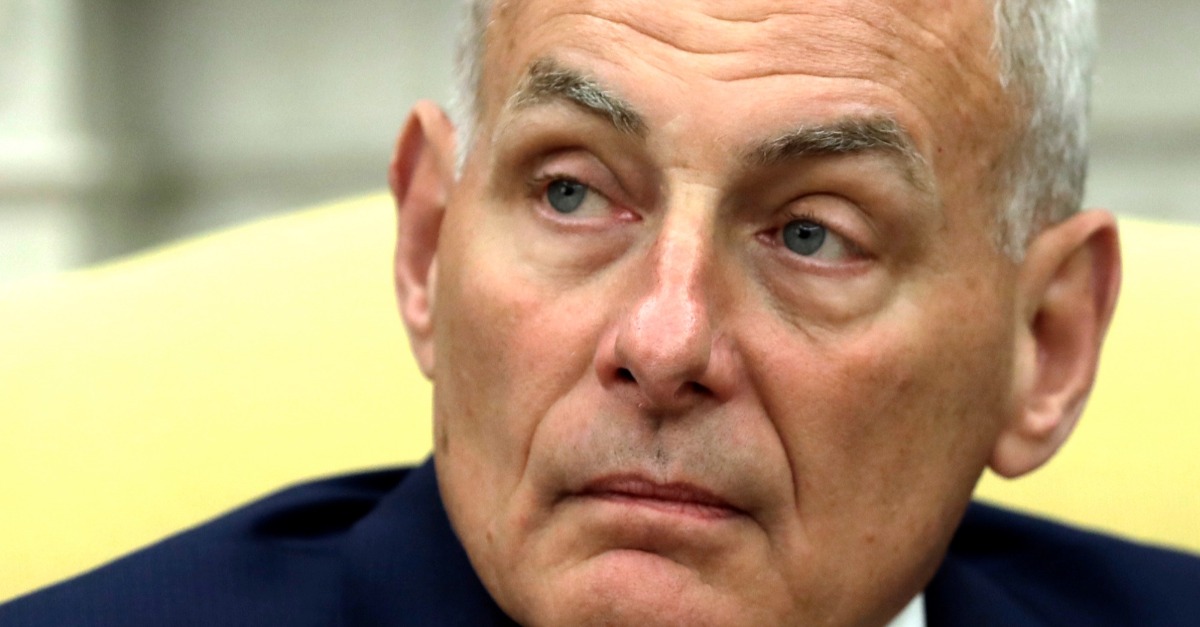 Before we get to John Kelly, let’s detour over to his molecular opposite, Anthony Scaramucci. Before Donald Trump made him communications director, The Mooch filed a memo detailing his goals in his new job, and since of course they were leaked to the press, we can list them now: improve the comms’ office’s rapport with the media, create a “complaint box” for journalists, humanize the president through op-eds and “modernized fireside chats,” focus on the positive.

All that comes off as pretty shrewd, even if Scaramucci is just leaping over the White House’s current managerial bar, which has been debased to “Chicken Limbo” levels. Could The Mooch have become a bulwark of stability on the marble-strewn ice rink that is the Trump administration? Refrain from looking at him for a few seconds and you might think so. Alas, he was sacked by new White House chief of staff John Kelly during only his tenth day on the job, so we’ll never know for certain.

Over now to Kelly, who seems to have been assembled by a computer programmed with Trump’s most frantic administrative needs: he’s Irish, Bostonian, golem-faced, a veteran of both the Marine Corps and U.S. Southern Command, and violently allergic to bullshit. His first days on the job have been spent steadying the president’s excesses. That’s meant, among other things, scooching The Mooch, calling up Jeff Sessions to assure the besieged attorney general that his job is secure (I’m actually disappointed about that one), and giving H.R. McMaster the green light to expunge the National Security Council of Steve Bannon-loving Iran hawks (though I love that one!).

Trump’s Twitter feed has eased off its tempestuous attacks on his own staff in favor of tempestuous attacks on the media and Congress—progress, I think you’ll agree. Meanwhile, the president—who I’ve always contended is deeply impressionable rather than the unflappable redwood of populist ideology that many of his fans saw—is reportedly eager to please his new enforcer, appearing more prepared at meetings and rattling off statistics, according to Axios. Who can blame him? Kelly cuts such an impressive figure, especially in contrast to his predecessor Reince Priebus, that I imagine it’s difficult not to step lively when he enters a room. And while I’m pretty libertarian, I have no issue whatsoever with the White House staff being under martial law.

RELATED: The White House should be in better hands with John Kelly

Best of all is that Kelly seems to have identified the root of the problem: Trump tends to be influenced by the last staffer he spoke with or New York friend he called or Breitbart article he read, which lands those opinions squarely on the presidential Twitter account even if they’re dishonest or psychotic. Kelly’s emphasis has been on controlling the flow of news to the president, limiting the access staffers have to him, reducing that gusher of information through his open mind to a regulated trickle. Kelly isn’t even trying to keep the president off of social media, according to Politico, but is rather striving to ensure that what goes out is consistent and levelheaded.

Kelly, like so many generals, appears to be a realist. He surely remembers Donald Rumsfeld’s dictum: “You have to go to war with the military you have, and if you’re lucky enough, you get the military you want.” He isn’t so fortuitous to have the president he wants, so the nation will have to be governed with the president he has, and that means making the best out of a trying situation, minimizing Trump’s worst impulses and maximizing his talents. After the vicious infighting of just last week, the difference is palpable and relieving. Can a man who sounds exactly like Jim Calhoun coach a winning White House team? We’ll see.