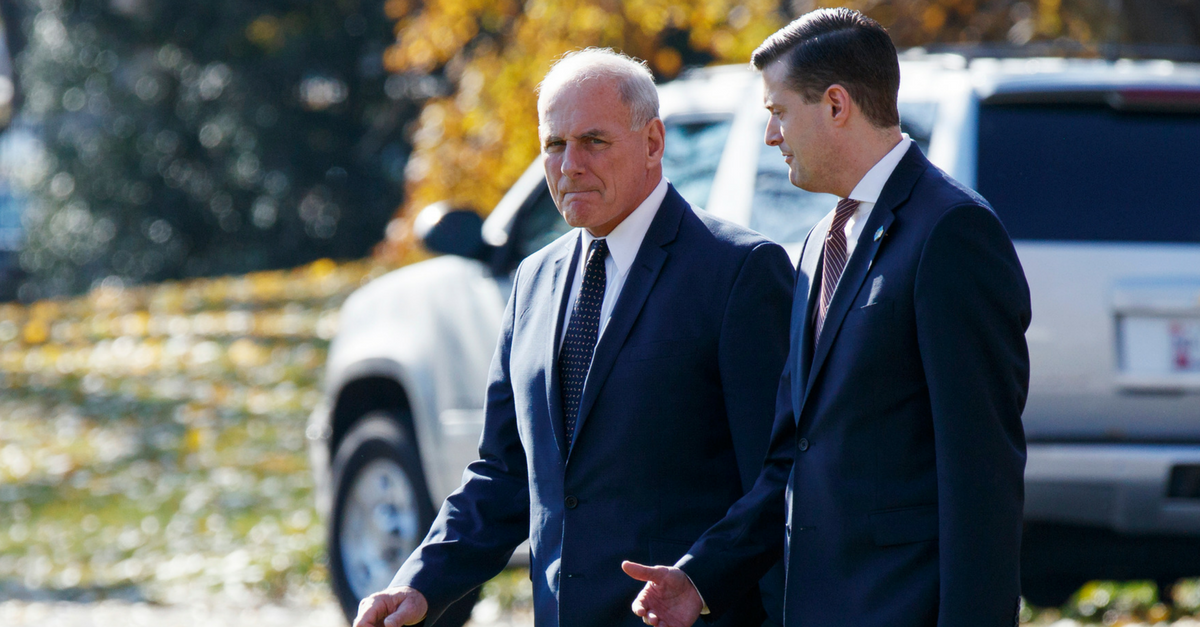 Disgraced Oval Office aide Rob Porter resigned from his position this week after both of his ex-wives came forward with accounts of physical abuse, and sadly the scandal — and the White House’s mishandling of it — is just the latest example of the Trump administration’s pattern of disregarding violence against women and protecting their abusers.

When news first broke that Porter had abused both his first wife Colbie Holderness and his second wife Jennifer Willoughby, White House Chief of Staff John Kelly’s initial statement on the matter was shockingly dismissing given the serious nature of the allegations against his employee. At the time, he called Porter a “man of integrity and honor” and even said he was “proud to serve alongside him.”

However, Kelly later changed his tune when Holderness shared with the press graphic photos taken after her then-husband Porter “threw [her] down on the bed and punched [her] in the face” during a fight in 2005. Despite calling the allegations “simply false,” Porter soon announced his resignation from the administration, and the chief of staff then released a second statement.

His first wife, Colbie Holderness, provided these photos from a vacation they took together in Florence, Italy: pic.twitter.com/tl3TbyGA8Y

“I was shocked by the new allegations released today against Rob Porter,” Kelly amended his previous words. “There is no place for domestic violence in our society.”

But were the allegations really so shocking to Kelly? During background interviews for Porter’s security clearance, both of his former wives told the FBI about his abuse, so members of the executive branch were aware of the claims at some point in the hiring process. Additionally, a senior administration official indicated that Kelly and other top White House officials had known about the accusations for months before the public became aware of them.

What’s worse, however, is that Kelly didn’t just learn of Porter’s abuse as early as the fall of 2017 and allow him to remain on board. He reportedly actually had a hand in elevating the aide’s standing by giving several opportunities to move up the ladder all while being aware of his past. If Kelly really believes there’s no place for domestic violence in society, then why did he find plenty of room for a domestic abuser in our government? To then go on to protect that abuser sent yet another message to women nationwide that those currently in power will ignore them, silence them, not believe them or blatantly not care when they come forward with stories of abuse.

The president’s response to the controversy only reaffirmed that message, as he used his first comments on the matter to defend his disgraced aide rather than to show any sympathy for the women involved. Noting he was “surprised” by the allegations against Porter, President Trump commended him on a job well done in the White House, expressed hope that he has a “wonderful career” and made sure to remind reporters that he maintains his innocence.

“He says he’s innocent, and I think you have to remember that,” Trump said. “He said very strongly yesterday that he’s innocent, but you’ll have to talk to him about that.”

But the Trump administration’s pattern of downplaying and even flat-out denying violence against women by members of its own ranks and those who prove useful to their cause is nothing new.

Before he was even in the White House, then-presidential candidate Trump was faced with two scandals involving his campaign staff and ultimately stood by both men. In March of 2016, then-campaign manager Corey Lewandowski was charged with assaulting a Breitbart reporter, but the campaign claimed no one saw the incident until video evidence eventually surfaced. Months later, word got out that adviser Steven Bannon had been charged with domestic violence and battery against his ex-wife in 1996, but he went on to serve as White House Chief Strategist for the administration.

Early last year, Andrew Pudzer withdrew his nomination for labor secretary after his ex-wife accused him of physically abusing her in the 1980s, but the White House is reportedly still trying to find a place for him within the administration. In the recent Alabama Senate race, President Trump endorsed Republican candidate Roy Moore despite his being accused of sexual assault by several women when they were just teenage girls because “we don’t need a liberal person in there.”

And of course, the president himself has been accused of sexual misconduct ranging from harassment to assault to rape by over 19 women. Despite his bragging about grabbing women “by the pussy,” President Trump has repeatedly denied his accusers’ accounts, calling them “totally made up nonsense” and even claiming some of the women are too unattractive for him to have abused. The administration has continuously backed him, with press secretary Sarah Huckabee Sanders most recently making it clear that the White House’s official position on the issue is that all of these women are lying.

While many will write off the alleged behavior of these men as irrelevant and unrelated to their ability to do their jobs, the values of our public servants — especially when it comes to how they view and treat half of the population — are important. If, as John Kelly says, such violence against women has no place in our society, then it shouldn’t have a place in our White House because the behavior of our leadership can and does influence what society deems acceptable. When it comes to the Rob Porter scandal, unfortunately, this administration added to its deeply disturbing pattern of protecting abusers and dismissing victims. The move speaks volumes of what little value the Trump White House places on the lives and experiences of women, presents men with a sickening standard for treatment of women and tells women who are victims of abuse that they don’t matter.