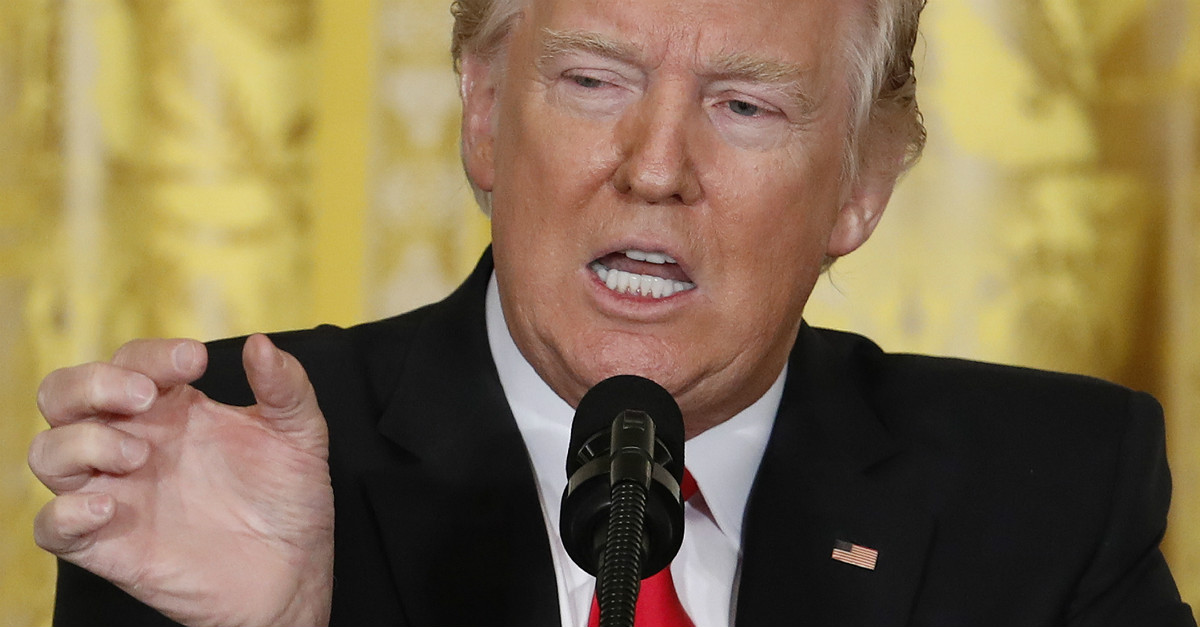 I finally took that dialect quiz that’s been getting passed around Facebook, the one that identifies the cities you sound the most like. My results were no surprise: Boston and Providence and Springfield, I’ll meet you guys at the grinder shop off of the rotary.

If Donald Trump were to take that quiz, he’d probably know his “bodegas” and understand that standing “on line” doesn’t necessarily refer to the Internet. But the Trumpian style goes well beyond standard-issue New Yawkness; the man has cobbled together an entire tongue for himself and it’s our greatest reason yet to deplore the Tower of Babel. George Will once summed up Trump’s curious rhetorical methods as “a drunk with a bullhorn reading aloud James Joyce’s ‘Finnegan’s Wake’ under water.” Whether you agree with that or not, Trump-ese was out “tremendously” and “bigly” at the president’s mid-day press conference on Thursday, and the result was kaleidoscopically psychotic, the nuttiest presidential appearance in American history.

We all know Trump hates the media and loves any tawdry soap opera in which he’s a starring character. But holy hell, did this one send the vanity needles flying rightwards. The man who is supposed to be becoming more presidential, letting the garments of his office fall around him, sounded like Fidel Castro haranguing his people from a balcony. For more than an hour, he blazed with attacks on the press, barrel rolling and curlicuing through topics at random like a spasmodic in a biplane, while reporters frantically tried to call his attention back: “Um, sir? The question was about taxes…”

The best part was when he declared that “Russia is fake news,” as though the entire country was a sort of sprawling CNN-istan. And the honorable mentions were many. Referencing a Russian vessel that had been spotted off the coast of Connecticut, Trump said that politically speaking, “The greatest thing I could do is shoot that ship that’s 30 miles offshore right out of the water.” Thankfully, he added, he won’t be starting a thermonuclear war anytime soon, though these are the sorts of things that must now be clarified in the age of Trump. One imagines his White House as the movie “Crimson Tide,” with Trump trying to launch the nukes, Priebus mutinying to stop him, and Bannon staring at the torpedoes and panting carnally.

Back at the press conference, Trump had once again brought up Hillary Clinton, whose ghost apparently clatters around his mind at all hours. “Hillary Clinton gave away 20 percent of the uranium in the United States!” he bellowed. “You say I’m close to Russia! She’s close to Russia!” Clinton’s uranium giveaway was indeed a scandal, one unfairly ignored by the media…but dude, you won. Get over it. Elsewhere, Trump demanded of a journalist after hearing his British accent, “Where are you from?!” (Britain, as it turns out.) A question from a Jewish man elicited a declaration that Trump was “the least anti-Semitic person you’ll ever meet.” By the end, the president was judging every question with those cognates of the Trumpian dialect, “very nice,” “very fair,” “very bad.”

RELATED: President Trump refuses to address recent Russian aggression, saying, “I don’t have to tell you”

The primary takeaway from this outbreak of verbal plague is that Trump is still obsessed with accusations that he’s too cozy to Russia, which isn’t a real country. He has reason to be upset here. The media has taken to portraying him as the next Manchurian candidate on the basis of nothing more than an ongoing and so far inconclusive FBI investigation. The press is hysterical on Russia, no question. But this is not how you react, baying for blood and dismissing entire hemispheres as “fake news.” It’s a shame, too, because there were some real developments embedded in there, Trump’s assurance that he’d never talked to Mike Flynn about sanctions with Moscow and his lauding some of the DREAMers as “incredible kids in many cases.”

Instead, we’re all once again worrying that we’ve handed the nuclear silo keys to a baboon. For goodness sake, Mister President, invest in Rosetta Stone already.