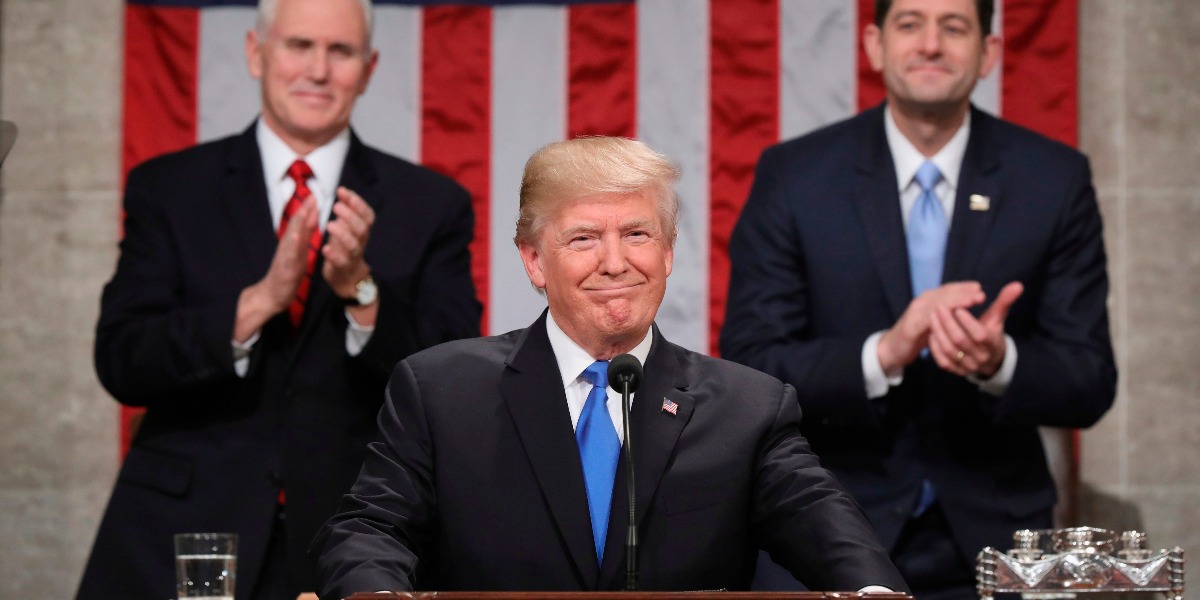 So many of the takes on President Trump’s second State of the Union address focused on policy specifics, as they should. I found much I liked (tax cuts, deregulation, loosening of FDA restrictions on medicine for the terminally ill, prison reform, a path to citizenship for Dreamers) and much I disliked (criticizing the military sequester and pledging to boost Pentagon spending, seemingly renewing the failed war on drugs, tariffs).

Coming from a libertarian conservative, this has been the case for me throughout Trump’s first year as president: It’s been about half good, half not. The best I can do, or anyone without an axe to grind can ever do, is praise the good while condemning the bad.

But for many Americans, this is too much in the weeds. They want their heroes and villains, political or otherwise, served up more cleanly. The details can get boggy. A bigger picture is what they seek. Fair enough.

So let’s put aside my ideological inclinations. Let’s forget about yours as well. Let’s even forget about what the Republicans who cheered Trump, and Democrats who sat on their hands stone-faced for much of the night, might also think.

Most importantly: What did most Americans think of Trump’s SOTU? Most presidents of either party get a poll bump after SOTU addresses and Trump will surely be no different.

But did his SOTU come across well to most people? Did it resonate?

I believe it did, or will, and for one primary reason. Trump’s speech was a success because it hammered home the country’s improvement in the bread and butter areas that matter the most to most people: jobs, the economy, and financial stability and security.

“Since the election, we have created 2.4 million new jobs, including 200,000 new jobs in manufacturing alone,” Trump said Tuesday.

Trump said, “After years of wage stagnation, we are finally seeing rising wages.”

He’s right about that too.

“Unemployment claims have hit a 45-year low,” declared the president.

“Since we passed tax cuts, roughly 3 million workers have already gotten tax cut bonuses — many of them thousands and thousands of dollars per worker. And it’s getting more every month, every week,” Trump claimed.

Trump painted a rosy view of America’s financial health, but presidents often do this even when the public doesn’t feel the same way. Right now, voters’ positive attitudes about the economy are at a record high. While a slight majority have tended to give President Obama more credit for this than Trump, part of the president’s task Tuesday night was to make this upswing his narrative.

Probably more important than even Trump’s SOTU, right now, and increasingly as we head into February, Americans are also beginning to see increases in their paychecks in the wake of Republican tax reform. As I noted Monday, this story continues to get more attention on social media than it does mainstream media.

These trends and numbers all point toward a well-received Trump speech. But let’s look beyond the stats for a moment.

During the holidays, a close relative of mine who has worked in the construction industry for many years, and who isn’t exactly a hyper partisan, expressed to me that he hasn’t seem a boom like the current one in decades. He attributed it to not only Trump’s deregulation of federal laws that have long hampered so many businesses, great and small, but also to a renewed optimism. I’ve heard this from others as well, some Republican, but others more apolitical. We do know that many business leaders have expressed enthusiasm for Trump and his policies.

So much of what we see in the media regarding this president is overwhelmingly negative (much of it warranted, don’t get me wrong) and yet how many Americans are there out there like my relative, who see mostly positive results? How many who are seeing increased take home pay are looking up from their bigger paychecks to see nothing but pundits bashing Trump?

How many are tired of it? How did they likely view the SOTU?

Donald Trump was elected in large part because millions of Americans felt that there was no one to speak for them, while the elite class was simultaneously against them. For those voters, even after a year of Trump being in the White House, that dynamic hasn’t changed. Many might even think it’s gotten worse.

What the average person hears is usually more important to a president’s success or failure than what the chattering class thinks the average person should hear. And if you’re one of the many Americans benefitting from the current economy, President Trump gave a heck of a speech Tuesday night.