We should protest the oppressive power of the presidency, not just presidents we don’t like 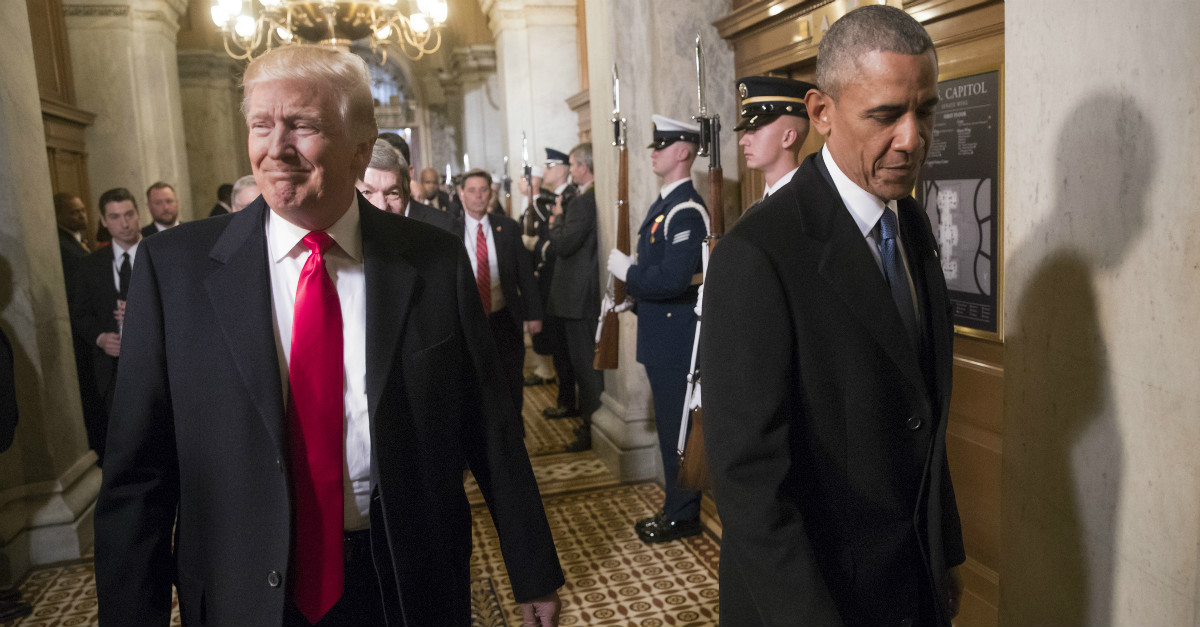 AP Photo/J. Scott Applewhite, Pool
President-elect Donald Trump, left, and President Barack Obama arrive for Trump's inauguration ceremony at the Capitol in Washington, Friday, Jan. 20, 2017. Trump, a real estate mogul and reality television star who upended American politics and energized voters angry with Washington, will be sworn in as the 45th president of the United States, putting Republicans in control of the White House for the first time in eight years. (AP Photo/J. Scott Applewhite, Pool)

Since President Trump signed his executive order temporarily blocking U.S. entrance from seven majority-Muslim countries and suspending all refugee admissions, uproar has been incessant. At least where I live, in the Twin Cities, large-scale protests have continued well past the initial outburst of public anger in the weekend immediately following Trump?s order. Elsewhere in the country ? particularly in cities that lean similarly left ? my understanding is the situation is much the same.

Though I?ve always preferred writing to carrying a placard as my main means of influencing the political conversation, I?m glad to see these protests happening. While some critiques of Trump?s order have been overblown, the truth is his travel restrictions have been inhumane, irrational, and ill-conceived as a defensive measure against terrorism.

Rep. Justin Amash (R-Mich.)?who has been a bright light of anti-partisanship in a hyper-partisan few weeks since Trump?s inauguration?was correct in his argument that the order flouts the rule of law. Particularly for those who in the initial chaos were detained and/or turned away from U.S. airports despite their possession of legitimate travel papers, this is a denial of due process. And whatever Trump says about this not being the ?Muslim ban? ? honestly, that suggests to me the worrying possibility that he has some other, more onerous ban in mind ? the president?s own comments, the comments of his allies, and the order?s preference for religious minorities in majority-Muslim countries all say otherwise.

All that to say: The protests strike me as a good thing.

Still, many civil libertarians have noted that these newly minted political activists were largely silent during abuses of the Obama administration which, while not identical to this Trump order, deserve to be placed in the same general category. Are these protesters hypocrites?

?You would think the American presidency had been a modest constitutional backwater before Trump came along and turned it into a dictatorship,? writes Rare?s Matt Purple. ?Not so,? he continues. ?A certain fellow by the name of Barack Obama also had a gaping authoritarian streak, one that went largely unremarked upon by the same voices now decrying Trump?s energy in the executive.?

At The Week, Michael Brendan Dougherty was equally pointed in his criticism. In the panic Trump?s order set off, ?it revealed something stupid and counterproductive about our politics as well. On the list of enormities inflicted on the Middle East by American policy in the last 20 years, this temporary visa ban, for all its crudity, would not rate in the top 25.? Why did the anger arrive now and not, say, any time in the last eight years?

Both Purple and Dougherty?s arguments are dead on, and their point about consistency over partisanship cannot be heard enough. That fact hasn?t prevented a backlash against the consistency argument. We civil libertarians might be technically right, the critics contend, but we?re being unnecessarily divisive at a time when unity against Trumpian power grabs and constitutional breaches should be our top and single political priority.

Here?s the thing: In some cases, what?s going on is more about schadenfreude than a principled case for consistency. And schadenfreude, not to put to fine a point on it, is a jerk move. There?s a lot of talk about decency right now, and decent people do not rejoice in their enemies? misfortune, even when they are political enemies whose anger we might believe to be hypocritical and short-sighted.

At the same time, I think we can make the consistency argument without drifting into schadenfreude. In fact, I think we must if the uproar is to accomplish anything real.

As Amash wrote on Twitter, ?Admitting that both parties routinely ignore the Constitution, reject the Rule of Law, and erode liberty is the first step to recovery?If you can?t accept both sides have been disastrous, then don?t expect things to get better.?

So to everyone out in the streets marching for civil liberties for the first time: Thank you. Keep doing what you?re doing. I hope to see your outrage extended to include the state of the war on terror more broadly. But ? and this is key ? remember to protest the presidency itself more than you protest this particular president.

RELATED: Why we should listen when Donald Trump says America isn?t so innocent

Remember that a lot of what Trump is doing is not as new as it feels, and that the groundwork that made much of this possible was laid by a guy you may have liked.

Remember that the presidency needs institutional, not individual, change.

Remember that its power must be massively curtailed no matter who is in office.

And remember that if we can?t get a consistent perspective, acknowledging everything that happened before Jan. 20, 2017?well, all the protests may as well shut down now.