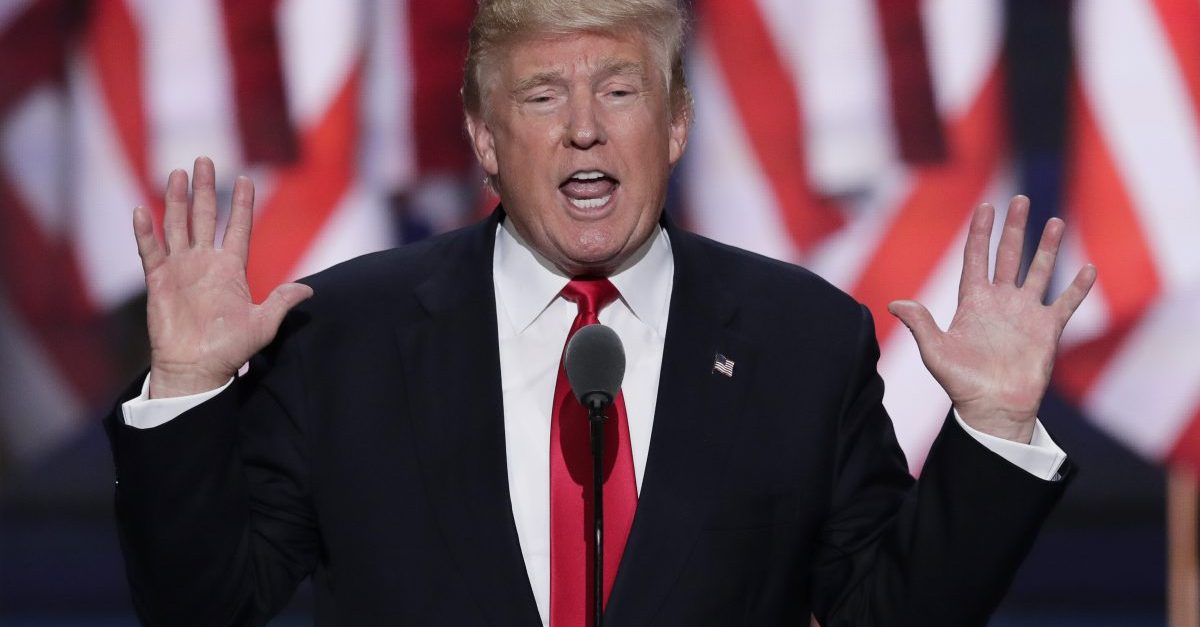 AP Photo/J. Scott Applewhite, File
FILE - In this Thursday, July 21, 2016 file photo, Republican Presidential Candidate, Donald Trump, speaks during the final day of the Republican National Convention in Cleveland. One day after Trump accepted the Republican nomination for president of the United States, his lawyers will be in court to try to get a lawsuit dismissed alleging that the business mogul defrauded customers who took courses with false promises of teaching success in real estate at the now-defunct Trump University. Lawyers for Trump will appear Friday, July 22, 2016, before U.S. District Judge Gonzalo Curiel to argue that a lawsuit against the nominee lacks merit. (AP Photo/J. Scott Applewhite, File)

Maybe this exposes me as an old curmudgeon, but I have never heard of the majority of the acts the Trump team has booked, which to date seem to be: Jackie Evancho, Lee Greenwood, 3 Doors Down, Toby Keith, the Piano Guys, DJ Ravidrums, the Frontmen of Country and Jon Voight.

(Ok, I’m familiar with the Piano Guys, but also they’re only “famous” on YouTube, for whatever that’s worth in this Year of Our Lord 2017.)

This low-wattage list of stars has produced a deluge of dishonest defensiveness among some of Trump’s supporters and a petty schadenfreude in many of his opponents.

Those who like Trump insist these are good acts, and if you don’t know or like them you’re probably just a coastal elitist who is exactly the sort of person Trump was elected to defeat. These people are “A-listers,” maintained Trump Inauguration Committee Chairman Tom Barrack when he infamously described the festivities as designed to possess a certain “soft-sensuality.” Trump himself seems to have missed that memo about DJ Ravidrums being on the A-list, as he sent out a tweet suggesting no one from the A-list would be allowed to attend because he doesn’t want them there.

On the other side, headlines like Vanity Fair’s sneering “Donald Trump Continues Sad Search for Celebrities Willing to Perform at His Inauguration” are representative of the laugh Trump’s critics are having at his inauguration line-up’s expense. The inauguration acts have been relentlessly skewered on late night TV and online.

But, as much as the Trump team might wish they were in a different position — and it seems clear they do, whatever their protests to the contrary — is it really such a bad thing to cut the inauguration down a peg?

After all, this is the highest ceremony of the imperial presidency, and it has frankly become a mockery of any pretense of preserving the comparatively humble office our Founders designed. (To be clear, this criticism was relevant well before the Obama festivities, and there is every indication it will be amply applicable to this Friday’s events, too.)

The modern inauguration, as Charlie Peters ably explains over at National Review, is better fit for a king than the president of a republic:

In order to maintain [limited] governance, reducing the grandeur and cost of state events is necessary. Inaugural traditions should remain limited so that we, and the new president, can focus on the crucial value they represent: the smooth continuation of leadership of a republic. Rampant celebration of a new leader threatens to dilute this value and allow new presidents to consider themselves as something more than servants of the people.

Almost all aspects of the Inauguration Day events have undergone a transition over the decades from limited, sensible processes to celebrations of pomp and extravagance. The first inaugural parade to take place in Washington was Thomas Jefferson’s in 1801. Jefferson walked from his boardinghouse to the Capitol, joined by a company of riflemen from Alexandria, Va., and “fellow citizens.” In 1953, the year of Eisenhower’s inauguration, the parade had ballooned to an absurd affair involving 73 bands, 59 floats, elephants, horses, and civilian and military vehicles.

It goes without saying, as Peters duly notes, that the inauguration is hardly the only symptom of the overgrown pomp and power of the Oval Office:

Even the State of the Union speech has been transformed into a narcissistic address. In 1801, Thomas Jefferson delivered the State of the Union via a written report, and this remained the standard practice until Woodrow Wilson switched to reading his address in person. Nowadays it resembles a king’s speech, full of standing ovations and relentless clapping. I am unconvinced that Donald Trump will return it to its reserved, Jeffersonian form.

And it should likewise go without saying that Beyoncé skipping this year’s inauguration is not going to magically fix the dysfunction of the executive branch.

In fact, Trump himself, the ultimate celebrity president, doesn’t seem particularly interested in reforming the office he is about to take. As Sen. Rand Paul said in his 2013 drone filibuster, “Every four years we elect a new criminal because that’s become the precise job description” — and Trump’s own comments indicate he is basically fine with that.

Still, a celebrity-lite inauguration is not a bad thing. It’s a symbolic step toward better governance, and for that reason it is not something to bemoan or mock.