Why violent anti-Trump protesters will never accomplish anything 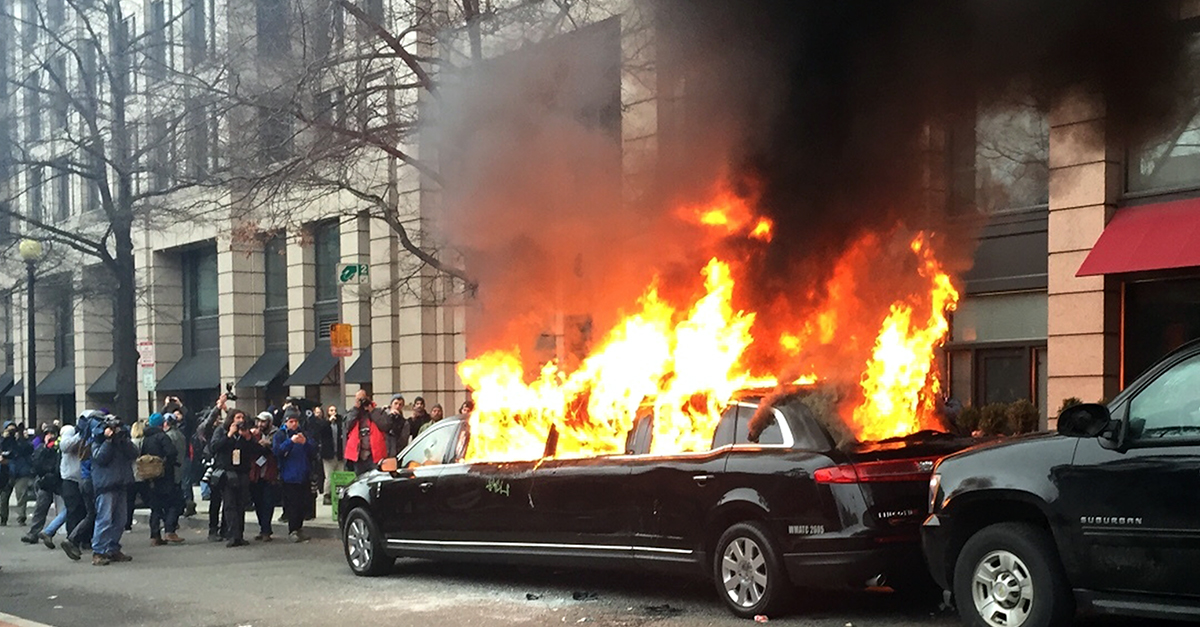 As a resident of Washington, DC, I was fortunate enough to be away from my adopted hometown on Inauguration Weekend. Ski mask-clad protesters smashed up the windows of several storefronts and lit fire to a limousine that, in a twist of irony, was later revealed to belong to a Muslim immigrant.

It’s understandable that so many Americans are taking to the streets in the wake of President Trump’s ascent to office. Opposing the government is a constitutional right enshrined in the First Amendment and moral right in every healthy democracy.

However, property damage is not political speech. Moreover, it only undermines well-meaning resistance movements by evaporating public sympathy. This is exactly what happened last Friday, as hundreds of articles condemned the rioters.

While I harbor some hope for the Trump administration on matters of war and regulatory reform, there’s no denying that our new president is downright frighting on many issues. An effective opposition on matters of civil liberties, immigration, trade, is needed now more than many years before.

In short, the left must shape up. Violent protest will only beget violent policies, as the public becomes distracted from the cause of protest in the first place.

The Trump opposition should look to the Free Speech Movement (FSM) for inspiration. As one of the few successful student movements in the 1960s, FSM successfully overturned the draconian speech policies of my alma mater, the University of California, Berkeley. At the time, almost all political speech was banned on campus — an incredibly strict policy for a generation that loved to speak its mind.

To oppose the anti-liberal rules, FSM students engaged in civil disobedience, deliberately breaking the rules by tabling, handing out leaflets, and occupying administrative buildings. These acts were illegal but, instead of engaging in violence or fighting with the police, the Berkeley radicals accepted whatever punishment from the police came their way.

Herein lies their brilliance. Because of their non-violent resistance, FSM was able to generate public sympathy because the video footage being broadcast across the nation was not of anarchy anarchists smashing windows and rioting, but rather of innocent looking youths being dragged into paddy wagons.

In fact, one tactic that the FSM protesters brilliantly mastered was going limp, forcing police officers to physically drag them without putting up a fight. As a result of the striking footage, many sympathetic citizens and politicians began to condemn the administration.

As California Assemblyman Willy Brown said in a speech at the time, “[T]he people in the state of California need to know that there’s something seriously wrong with this university when 801 people are dragged bodily down stairs from the administration building of this university and arrested.”

Nonviolent resistance gives protest movements the moral high ground, as the public sees the stark contrast between the brutality of the ruling regime and the pacifism of the resistance. It’s no wonder that nonviolent resistance has been effective in numerous political changes, from Indian independence led by Mahatma Gandhi to the American civil liberties movement led by Martin Luther King, Jr.

As the left shifts into opposition once again in the age of Trump, they must not forget the rich history of effective protest movements at their disposal. Violence will not deliver the changes they seek. Instead of hiding behind their masks, the Trump opposition should march openly and peacefully in the light of day, making the nation face our problems rather than dismissing their concerns as those of violent radicals.