Why would any American trust Russian TV station Russia Today? 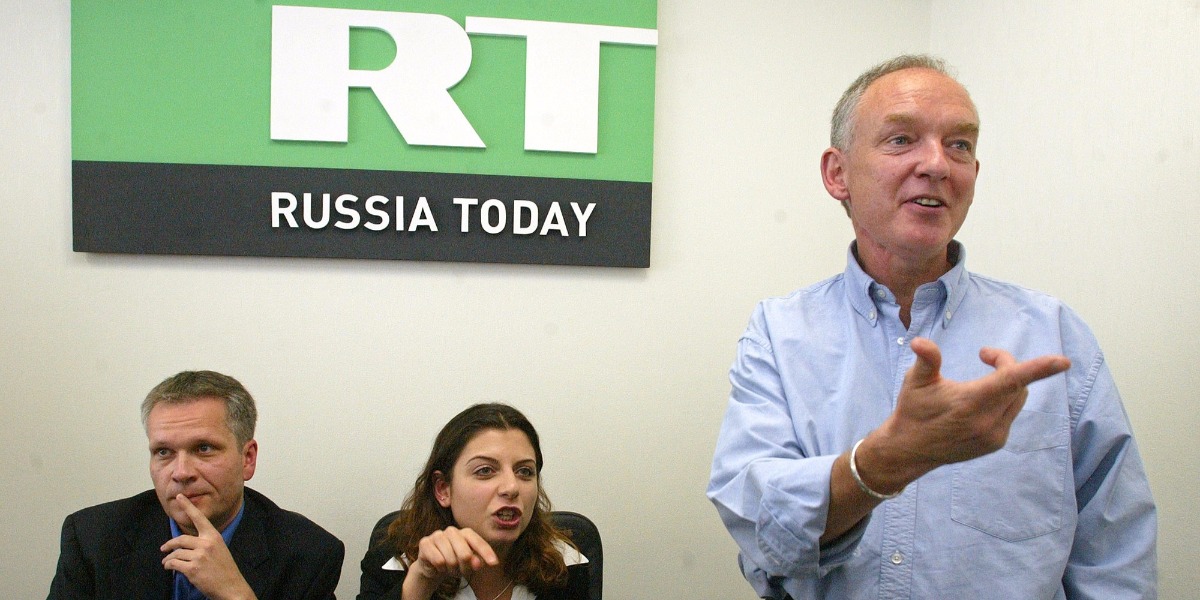 On Monday morning, I nearly wrecked my car rubbernecking as I drove past a bus stop bearing an ad for Kremlin propaganda organ Russia Today (or RT).

The ad featured a picture of Mike Papantonio, who hosts the RT show “America’s Lawyer,” and asked in large font, “Is this American enough for you?” Another ad touted RT’s collaboration with talk show host Larry King.

These ads, which as far as I can find out went up very recently, seem to be responding to US government pressure on the news outlet to register as a foreign agent under the Foreign Agent Registration Act of 1938, a demand RT finally complied with Monday after being asked to register in September.

Registration, which RT editor-in-chief Margarita Simonyan acquiesced to before posting a tweet sarcastically praising “American freedom of speech and all those who still believe in it,” will require RT to publicly disclose financial information concerning their relationship with the Russian government, according to the official FARA website.

Before RT agreed to register rather than face criminal charges, Justice Department spokesman Wyn Hornbuckle, told the Washington Post that FARA does not “affect in any way the contents of the message.” Regardless of its involvement with the Russian government, RT can still say whatever it wants in its ads and broadcasts.

At the time this Post article ran, RT had a variety of ads up around Washington D.C., many of them mocking attempts by many Americans to blame Hillary Clinton’s loss in the 2016 election on Russian meddling. “Stuck in traffic? Lost an election? Blame it on us!” one ad read. As calls for RT to register under FARA increased, however, the Russian-backed news outlet announced that it would be removing these ads early.

Although FARA does not censor content, but Simonyan claimed that the ads were taken down on the advice of RT’s legal team. Either way, the perception that RT was forced to remove their ads would surely bolster its attempts to portray itself as a renegade organ of truth being suppressed by a corrupt establishment.

These ads truly do seem to have vanished, but in their place, we have a new message.

The mocking, ideologically bankrupt strategy of what Ben Shapiro calls “drinking liberal tears” has been rejected in favor of an attempt to drape Kremlin propaganda in the American flag. By prominently displaying their slogan “Question More” while asking “Is this American enough for you?” RT is simultaneously appealing to Americans’ increasing distrust of their own media and public institutions and to a sense of flag-waving patriotism.

These two sentiments often exist in the same individual. What seems strange is that these paranoid patriots would turn to Russia for the solution. A Facebook page called “War Zone,” which is dedicated to praising the American military and prominently displays images from recent war films like “American Sniper” and “Fury,” recently posted a video with the title “Watch Putin Rip Out Earpiece & Destroy NBC Airhead Megyn Kelly.” Thankfully, the post only garnered about 100 likes on a page with over 70,000 followers, but I was still shocked to see that American journalists (even conservative ones) are now more reviled than corrupt, murderous foreign despots. After giving it some thought, however, I think I’ve figured out why this is.

RELATED: Critics denounce televangelist Pat Robertson for his advice to Trump on the Mueller case

The message the Russian propagandists are trying to send is that RT is American, yet independent from the destructive forces of liberalism currently holding America hostage. To recover the true America, RT’s viewers seem to believe that they must look beyond America’s borders. The problem can only be fixed from the outside.

Although RT claims vastly higher numbers, an investigation by the Daily Beast puts its American daily viewership at less than 30,000 people. It’s probably safe to say that the FARA registration won’t cost RT any of its current viewers, but with distrust and polarization increasing, faith in democracy decreasing, and RT ads dotting the streets of D.C., the Kremlin propaganda machine seems to be making a play to expand its role in our public discourse.