Women working on Capitol Hill are fighting for the right to bare arms — not their firearms — their literal arms.

As a heat wave swept through Washington, D.C., the dress code in certain areas of the Capitol suddenly came into sharp focus.

According to the Congressional dress code, as it currently stands, women are not allowed to wear anything sleeveless in the Speakers’ Lobby – a rule that has been on the books for some time but hasn’t always been strictly enforced.

Speaker of the House Paul Ryan (R-WI) might be open to changing the dress code after an outcry from women working on the Hill.

Speaker Ryan said Thursday that modernizing the decades-old dress code is under discussion after reporters were barred from Speakers’ Lobby, a corridor off the House chamber, for failing to wear appropriate attire.

The rules bar women in sleeveless dresses or tops and require men to wear jackets and ties. More recently, Ryan reminded lawmakers that they must meet certain sartorial standards on the House floor as well.

RELATED: Nancy Pelosi wonders where the House GOP’s Obamacare replacement plan is, and some Republicans are asking as well

“This is nothing new,” he said. “It’s certainly not something that I devised.”

But that doesn’t mean enforcement couldn’t be a bit modernized, Ryan told reporters at his weekly news conference.

“So that is why we will be working with the sergeant-at-arms to ensure the enforcement of appropriate business attire is updated,” he said. “Decorum is important, especially for this institution. And a dress code in the chamber, in the (Speakers’) Lobby, makes sense,” he said.

“But we also don’t need to bar otherwise accepted contemporary business attire. So look for a change on that soon,” Ryan said.

His response comes as women working at the Capitol started taking a stand against the dress code and posting their pictures on social media. One congresswoman, Jackie Speier (D-CA), even pushed for everyone to wear sleeveless attire Friday to protest the dress code. She wrote in a tweet, “Calling on all Members of Congress to join me tomorrow on the House Floor for #SleevelessFriday because women have the right to bare arms!”

Calling on all Members of Congress to join me tomorrow on the House Floor for #SleevelessFriday because women have the right to bare arms! pic.twitter.com/OK4JKgXIH1

Congresswoman Chellie Pingree (D-MN) posted a picture of a group of women who joined Rep. Speier for #SleevelessFriday, captioning the photo, “But it’s 2017 and women vote, hold office, + choose their own style. Time to update House Rules to reflect the times! #SleevelessFriday”

…But it’s 2017 and women vote, hold office, + choose their own style. Time to update House Rules to reflect the times! #SleevelessFriday pic.twitter.com/hSJarEsKKy

The House dress code must be updated to respect a woman's right to bare arms – #SleevelessFriday pic.twitter.com/Oyjv22Wfqv

Reporters who had been barred last month took to Twitter and other social media to complain about rules that have been enforced inconsistently. On Wednesday, Rep. Martha McSally, R-Ariz., gently flouted the rules in a speech on the House floor.

“Before I yield back, I want to point out, I’m standing here in my professional attire, which happens to be a sleeveless dress and open-toed shoes,” McSally said. “With that, Mr. Speaker, I yield back.”

Glad to see @SpeakerRyan is updating the dress code for the House Floor. These unwritten rules are in desperate need of updates. 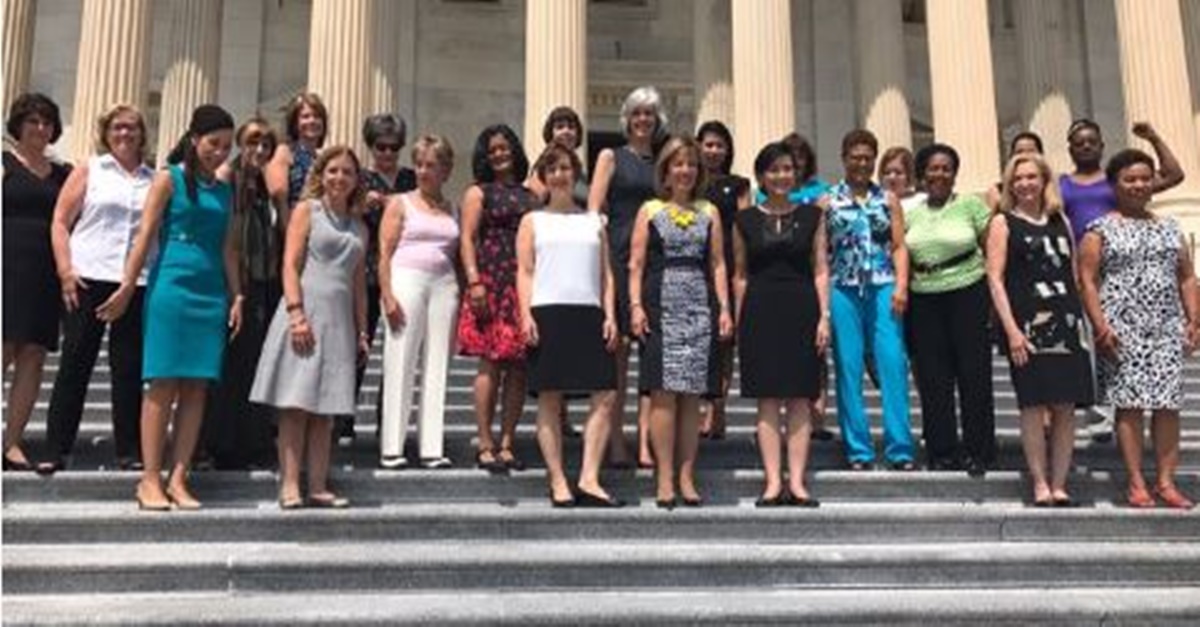