A few weeks ago, a photo of a woman flipping off President Trump’s motorcade as it passed by her on a Virginia highway went viral. This kind of dissent is supposed to be constitutionally protected–but it hasn’t always been treated that way in the past. Our president has flirted with the idea of suppressing freedom of the press, so it’s no surprise that recent developments show Trump, his opponents, and the First Amendment butting heads once again.

On Monday, scholars from the Georgetown University Law Center filed a brief in support of a lawsuit against the president for blocking his detractors on Twitter. In the lawsuit, lawyers from the Knight First Amendment Institute at Columbia allege that when Trump or his staff block people on Twitter, they are discriminating against viewpoints and suppressing free speech. But while Trump’s Twitter antics may offend common decency, they don’t violate the First Amendment.

The courts have ruled that in a public forum, restrictions on speech can’t be content-based. But what exactly is a public forum? Traditionally, forums are the places we associate with free expression—like a sidewalk or public park.

Considering Trump’s personal twitter account a “public forum” is a stretch. He created the account in 2009, years before any official involvement in politics. At that time, Trump was a reality TV star who used Twitter to fat-shame Rosie O’Donnell and gossip about Steve Jobs’ death.

He spent 2012 tweeting about the stars of Twilight, and how Robert Pattison “can do much better” than Kristen Stewart. If we label his personal account a forum, we’re basically saying that public officials, once they take office, can no longer be considered a private citizen in any context—an insane notion.

That woman who got fired for flipping off Trump? Strangers raised $127,000 for her. https://t.co/h2AVb0IyXz

Regardless, when you assume elected office, you can’t claim the same degree of privacy or association rights as a regular citizen. But the First Amendment only concerns state action, so this shouldn’t be applied to a politician’s personal accounts. It’s worth noting that Trump has an official Twitter account, @POTUS, from which none of this case’s seven plaintiffs have been blocked. Trump’s account, @realdonaldtrump, is a personal platform, not a government account—so the same rules shouldn’t apply.

Presidents face a higher bar for libel and often have to put up with vulgar displays and criticism. You and I have the right to remove friends from Facebook or block them on Twitter. When it comes to his official accounts, Trump loses that right. But the president should still have license to filter his personal accounts. The First Amendment gives you the right to talk about Donald Trump, not at him.

Critics insist that because Trump has used his personal Twitter to make announcements like a ban on transgender people in the military, his account has become a vehicle for public policy. Government officials use Twitter to make announcements all the time, like when mayors tweet out emergency response information or local disaster updates. So in denying individuals access to his Twitter, some would argue that Trump is preventing people from receiving government updates, or participating in conversations about them.

But are blocked people really denied access? After all, Trump’s Twitter isn’t protected, so anyone can see his tweets—even people who are blocked—if they just sign out of their account and reload the website or use an incognito browser. For that matter, many of Trump’s policy-related tweets are eventually echoed by his official account (from which no one is blocked) or covered extensively in the media. Whether a Trump tweet makes the front page of the New York Times, gets covered by cable news networks, or is shared by another user, it’s almost harder not to see it.

Even if you’re blocked by the president, you’re still free to tweet whatever you want about him. My personal favorite is one tweet that reads “Donald Trump always looks like he just farted in an elevator as other people are getting on.” Another person tweeted “Donald Trump is basically a YouTube comment section running for president.” Whether the president blocks you or follows you, you’re still free to say whatever you want about him on the internet. You can even still participate in conversations that spring up about Trump’s tweets, by viewing and responding to other people’s replies to his original tweet.

When Trump blocks you on Twitter, all he’s really doing is making it so your tweets don’t show up on his screen. He’s not denying you access to a forum or even his account, he’s just making it so your words don’t pop up on his personal feed. You have the right to say whatever you want about the president on Twitter or in real life, but you don’t have the right to make him listen.

Brad Polumbo is a Young Voices Advocate. His work has appeared in the Boston Globe, the Washington Examiner, and Spiked. He can be found on Twitter @Brad_Polumbo. 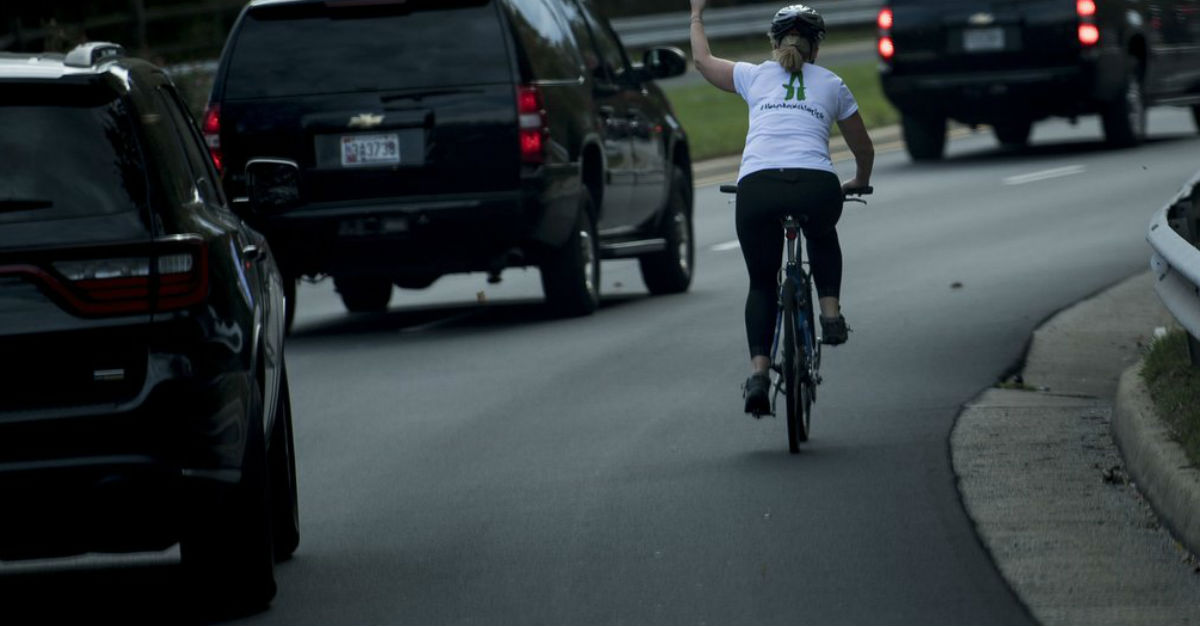