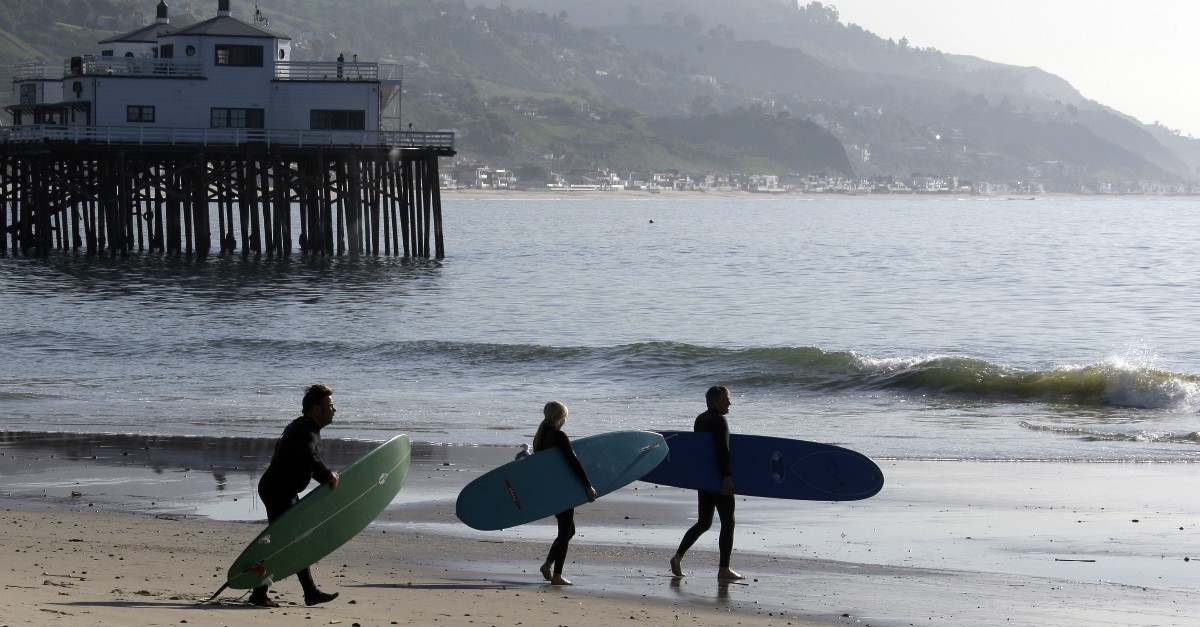 AP Photo/Reed Saxon
Surfers head for the waves at about the time the effects of a tsunami were expected, at Surfrider Beach in Malibu, Calif., Friday, March 11, 2011. Though waves surged in other areas along California's coast from a tsunami triggered by the massive earthquake in Japan, there was little noticeable change in conditions at Malibu, where the beach was not closed to the public. (AP Photo/Reed Saxon)

Remember when it was racist to even think about secession? That would be as recently as 2009 when then-governor Rick Perry swaggered up to a tea party podium and sounded equivocating at best about Texas’ continued statehood. “We’ve got a great union. There’s absolutely no reason to dissolve it,” he said. “But if Washington continues to thumb their nose at the American people, you know, who knows what might come out of that.”

Perry was filleted for that remark by indignant liberals. The usual analogies to the Confederacy were made; the usual dog whistles were detected. The remarks made such an impression that Perry was still walking them back more than three years later after President Obama’s reelection in 2012.

What, then, are we to make of California? The entire Golden State seems to have come down with a raging case of racism. A Reuters/Ipsos poll released on Tuesday found that 32 percent of Californians support seceding from the United States and forming their own country, apparently thanks to You Know Who—before the presidential election, only 20 percent wanted to jettison themselves from the union.

RELATED: This group is in a hurry for California to become its own country

A campaign has been started to capitalize on this sentiment, YesCalifornia, which chirpily anticipates, “California taking its place in the world, standing as an equal among nations.”

“In our view,” its website declares, “the United States of America represents so many things that conflict with Californian values, and our continued statehood means California will continue subsidizing the other states to our own detriment, and to the detriment of our children.”

If Rick Perry had said that, the press would be assuming that “so many things” meant “black people.”

They shouldn’t, though, nor should we lose our heads about California entertaining aspirations of becoming its own country. In a nation as wild and heterogeneous as ours—a republic, yes, but one whose confederated parts still jangle about—secession movements are an inevitability. Steady yourself liberals: before Fort Sumter, New England seriously considered seceding during the Hartford Convention, though they ultimately settled for a resolution that espoused something closer to nullification. More recently, following George W. Bush’s reelection in 2004, secessionist sentiment caught on in Vermont.

The most entertaining story of secession comes to us from Key West, which in 1982 was vexed by a roadblock established by the Border Patrol on the only road out of town, intended to combat illegal immigration and drug trafficking. In protest, the mayor declared the independence of Key West, branded his country the Conch Republic, and declared war on the United States. His lone act of aggression was to break a piece of Cuban bread over the head of a naval officer. The stunt eventually attracted enough attention that the feds killed the roadblock.

So don’t pillory California for participating in what is ultimately a very American tradition.

RELATED: After Brexit, the media explodes with lies and authoritarianism

Still, while Californians love to prattle about being the “sixth-largest economy on earth,” I’m not sure secession would bring the material benefits they’re hoping. California has a massive unfunded pension obligation and its deficit is rising. If the state chose to secede, it would find itself on its own as far as entitlements and welfare are concerned—no more federal money, which would divert precious state funds to whatever replacements it conjured up for Medicare and Social Security and so forth, which would further balloon its pensions.

In fairness, California also wouldn’t have to pay U.S. taxes anymore, so it could raise its own rates. But given the wild inefficiency of Golden State spending, would anyone trust its provisional government to establish an effective menu of welfare programs while also satisfying its pension claimants? An independent California would likely become another Mediterranean-style economic basket case, albeit with no European Union to bail it out and nowhere to smoke if you’re looking to take the edge off of fiscal calamity. And then how long until President Trump builds a wall on our new western border to prevent hordes of illegal Californian immigrants from getting in? This could escalate quickly.