John Daly DGAF! In a video posted by Matt Considine, founder of the NewClub Golf Society, John Daly is barefoot and standing in a tiny plot of grass above the Interstate 76. Then he starts launching golf balls over the highway and onto the neighboring Archbishop Hoban High School’s football field.

This very shot that Daly’s pulling off was a longtime daydream of Considine, the videographer. Under his post, he replies, “Proudly, I went to this school and daydreamed about this shot pretty much every day out of a third story window.”

Considine proceeds to say that Daly’s “got way too much club, no more than a 9 iron to the first goal post and 3 iron to the second. All downhill with a crosswind that tends to help a draw.”

It seems that Considine’s Twitter heckling doesn’t matter in retrospect, though, because as far as we know, no glass was shattered. Daly’s launching the golf balls right past moving vehicles like it’s his morning routine.

Watch John Daly, troublemaker-golf-extraordinaire do his mischievous thing prior to competing in the Bridgestone Championship at the Firestone Championship South Course. (Daly subsequently was WD after the first round). You can hear someone saying, “touché, touché” in the background).

If you’re wondering if this is legal, so were many Twitter users. 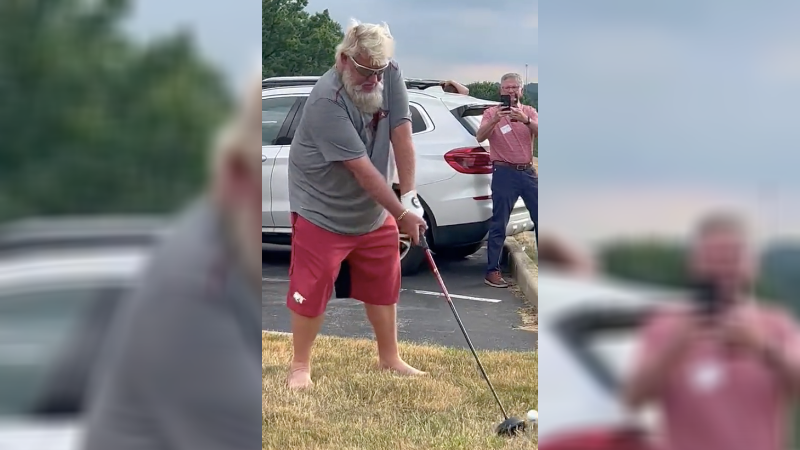