Disaffected teenagers have been around forever, but in the case of 19-year-old Charles Starkweather, the seemingly run-of-the-mill brooding and the juvenile delinquency took a shocking and bloody turn. He became a multi-state murder spree in the American heartland that left 10 people dead. Serial killer Starkweather had what some have called a partner in crime and others have called a victim in his 14-year-old girlfriend Caril Ann Fugate.

Charles Starkweather Murdered Someone Months Before His Killing Spree

Charles Raymond Starkweather was born in Lincoln, Nebraska in 1938, the third of Guy and Helen Starkweather’s seven children. His parents had little money and young Charlie Starkweather was bullied for being bowlegged and having a speech impediment, per Biography. He left school at 16 and like a lot of 1950s teenagers, was inspired by James Dean’s performance in the movie Rebel Without A Cause and emulated Dean’s look and attitude. He left high school at age 16 and took a job loading newspaper delivery trucks. He eventually met 13-year-old Caril Ann Fugate and started a relationship with her. Even though their age difference made Fugate legally incapable of consenting to a relationship with Starkweather.

According to All That’s Interesting, Starkweather had a falling out with his family after he crashed the family car while teaching Fugate to drive. This led to him being kicked out of his home. A year later, on November 27, 1957, Starkweather committed his first murder after he tried to buy a stuffed animal “on credit” from a gas station. When the gas station attendant, a man named Robert Colvert, refused to allow the purchase, Starkweather left and returned with a shotgun. He robbed the gas station, forced Culvert into the nearby woods, and fatally shot him.

Did Caril Ann Fugate Participate in The Starkweather Murders?

Months later on January 21, 1958, he arrived at the Fugate house and asked to see Caril Ann. When her mother Velda and stepfather Marion Bartlett told him to leave, he shot and killed them both. He then fatally strangled and stabbed Caril Ann’s 2-year-old half-sister Betty Jean, kicking off his infamous killing spree. It’s at this point in the narrative that Starkweather’s and Fugate’s versions of events begin to differ. Charles later told authorities that Caril Ann had participated in the murders of her family members, while Caril Ann insisted that she had been an unwilling hostage. Whatever the case, they holed up in the house with the dead bodies for a few days with a sign on the front warning people that the family was “sick with flu” and to stay away.

After the coast appeared clear, Starkweather brought Fugate to the farm of her family’s friend August Meyer where he killed Meyer and his dog. His car got stuck in the mud at the farm and they abandoned it, getting a ride from a couple passing by. Starkweather forced the couple, Robert Jensen and Carol King, back to an abandoned storm cellar in Bennet, Nebraska. He fatally shot Jensen, unsuccessfully attempted to rape King, and then shot her to death. Although he later claimed Fugate was the one to shoot King. Caril Ann denied this, claiming she’d remained in the car during the shootings.

Starkweather and Fugate fled to a wealthy section of Lincoln where they entered the home of industrialist C. Lauer Ward. Starkweather stabbed and killed Lillian Fenci, who worked in the home as a maid, and broke the family dog’s neck so it wouldn’t warn the Wards when they returned. Ward’s wife Clara Ward arrived first and was stabbed to death and Lauer was shot and killed after his arrival. Starkweather later claimed that Fugate had stabbed Clara. They stole some jewelry and a Packard and left Nebraska. At this point, law enforcement became aware of the crime spree and went on a house-by-house search for the couple. The governor called in the Nebraska National Guard and the Lincoln chief of police to start a manhunt and search the city.

The Death Penalty and a Life Sentence for Starkweather and Fugate

Starkweather and Fugate came across salesman Merle Collison sleeping in his Buick on the side of the road just outside Douglas, Wyoming. Someone shot and killed him; both Starkweather and Fugate later blamed the other for Collinson’s death. The car had a parking brake, which Charles Starkweather had never encountered before, and the car stalled out as they attempted to escape. A man named Joe Sprinkle was driving by and stopped to help. He and Starkweather got in an argument and as Starkweather threatened him with a gun, Natrona County Deputy Sheriff William Romer drove up. Fugate ran to Romer and identified Starkweather, who proceeded to lead three officers on a car chase, stopping when one of them shot at him and grazed his ear. The murderous rampage was finally over.

Spree killer Charles Starkweather was arrested and charged with first-degree murder for the death of Robert Jensen. He changed his story regarding Fugate several times, at first saying she wasn’t there at all, later calling her a “willing participant” in the crimes, detailing how she had participated in the murders, which Fugate continued to deny. Starkweather’s lawyer tried to have him declared legally insane, but the jury convicted him and gave him the death penalty. He was executed by the state of Nebraska by electric chair on June 25, 1959. Caril Ann Fugate was found by a judge to have had many opportunities to escape from Starkweather, whom she continued to claim had held her hostage, and received a life sentence. She served 18 years before being paroled on good behavior. She changed her name to Caril Ann Clair, married, and in 2020 at the age of 70, unsuccessfully applied for a pardon from the Nebraska parole board.

The Starkweather murders have inspired many references in popular culture, including Bruce Springsteen’s song “Nebraska,” the 1973 Terrence Malick movie Badlands, the 1993 Brad Pitt-Juliette Lewis movie Kalifornia, and the 1994 Woody Harrelson-Juliette Lewis movie Natural Born Killers, all of which included characters based on Charles Starkweather and Caril Ann Fugate. 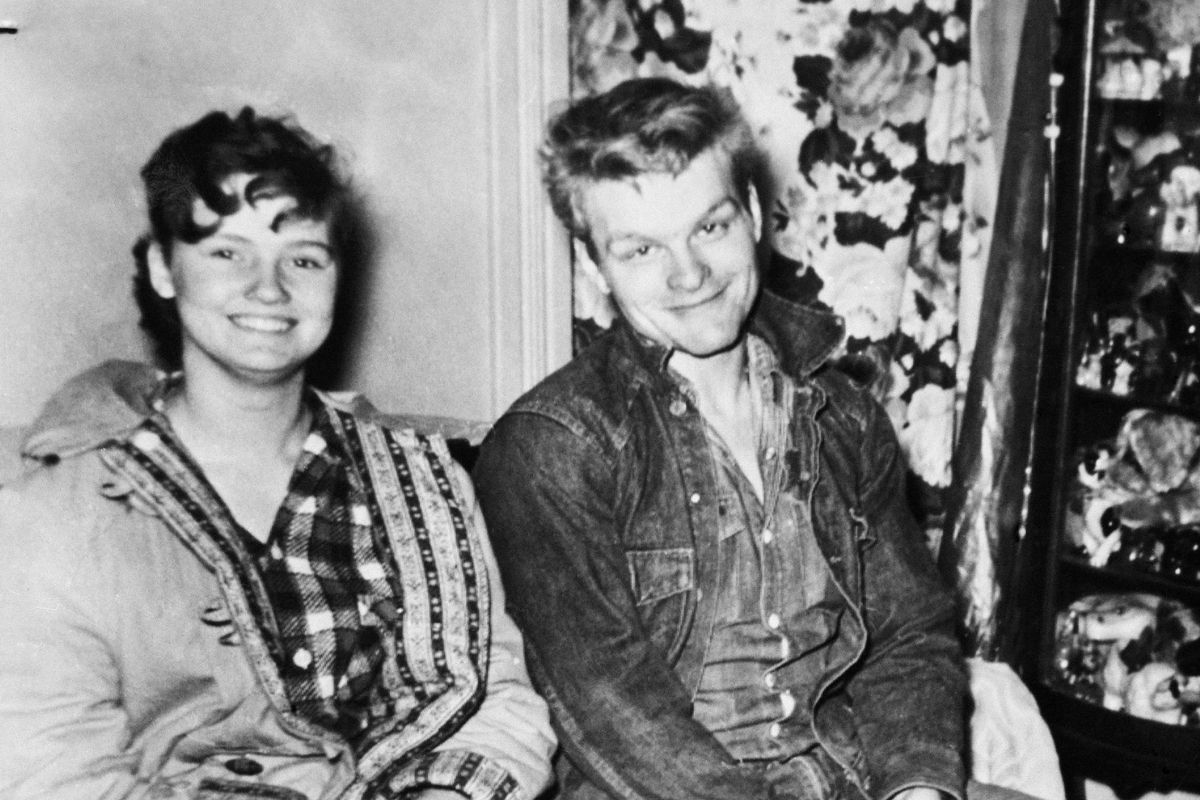