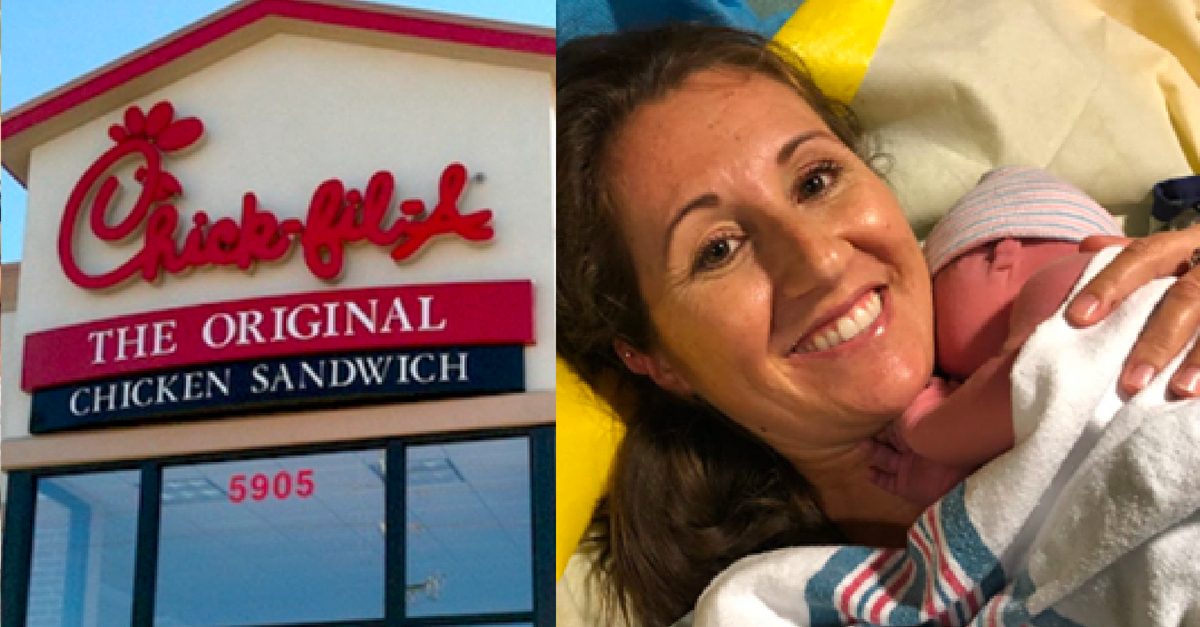 It looks like Chick-fil-A has done it again. Earlier this week, Robert and Falon Griffin were on their way to the San Antonio University Hospital, before dropping off their two daughters with some family friends.

While on the road, Falon Griffin, who was 39 weeks pregnant, needed to use a restroom, which is when the couple decided to stop at a Chick-fil-A. If you?ve ever been pregnant, I?m pretty sure you know the feeling, ladies. When the couple arrived, they saw the location was closed, but due to her urgency, Falon started to bang on the door in the hope someone would be inside. Staff saw the mom to be and decided to let her in despite the restaurant being closed.

According to an interview with KSAT, like a concerned husband would, Robert went into the restaurant to check on his wife. Instead, he found the manager, who let him know his wife was in the bathroom screaming. When he entered he saw his wife in a frantic state and thought, ?this baby is going right here, right now.?

Read more: One Chick-fil-A opened their doors last Sunday, and their reason will make you proud to be an American

At 10:30 p.m., ten minutes before paramedics arrived, baby Gracelyn came into the world in one of the most glorious places on earth. The birth took a total of six minutes, which makes us believe the baby was eager for some waffle fries! Robert stated he was scared for the mom and the newborn, due to them both being at high risk. When he saw the newborn, he noticed she had the umbilical cord wrapped around her neck twice, which is why he decided to cut them right then an there to avoid any complications. Robert stated the staff were more than helpful by providing towels to keep both mom and the baby warm, and helped as much as they could, despite all of them being no older than 25. Looks like the little nugget couldn?t wait to be born! Ha, see what I did there?

Robert posted his experience in a Facebook post, which has since gone viral, with over 119k likes and 90k shares! The Chick-Fil-A store director spoke with KENS 5 knees, where she recalls calling the 9-1-1 dispatcher, but realized it was to late, and the baby was coming.

Wait, there?s more to the story! Chick-Fil-A, being Chick-Fil-A, decided to celebrate the newborn, Gracelyn, by making her a VIP customer. The store is not only preparing to help her celebrate her first birthday, but offered her Chick-Fil-A for life and a job when she turns 14. Free food and a job just for being born in a Chick-Fil-A bathroom? That’s an American dream, folks.

Congratulations to the happy and their beautiful newborn baby, Gracelyn Mae Violet Griffin!