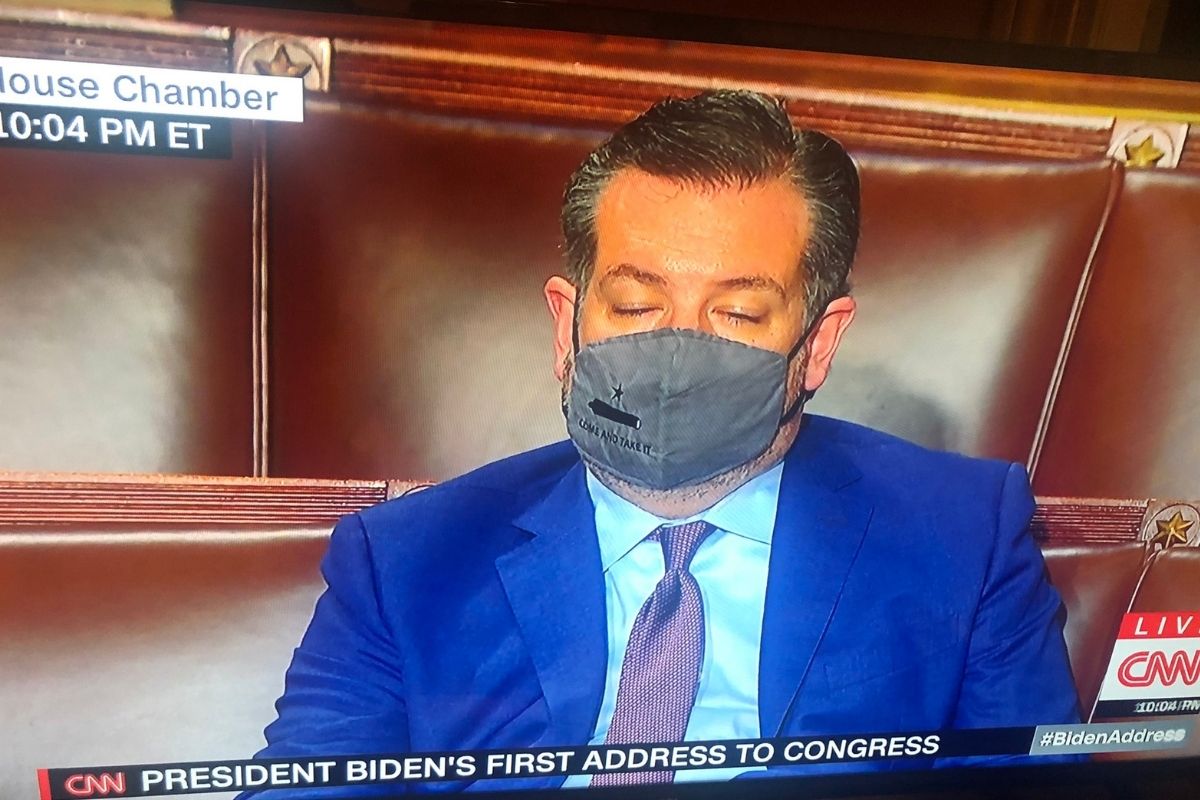 Oh Ted oh, you just can’t seem to stay away from the spotlight huh? I really can’t wait for Saturday Night Live to do this because this is hilarious. During President Joe Biden’s joint session of Congress on Wednesday afternoon in the House Chambers at the US Capitol in Washington, all eyes were on him… except for Ted Cruz’s eyes. While he was addressing a variety of topics including Coronavirus vaccinations distribution, American rescue plan, stimulus checks, rental in food assistance, and more, Texas Sen. Ted Cruz was caught sleeping and minding his own business.

So yes, although Biden’s speech was interrupted by several standing ovations and loud applause from lawmakers throughout the entire address, Senator Cruz was far less enthusiastic about the situation. Luckily for us, there was video footage of the Senators sleeping and briefly opening his eyes before then dozing me off again. Texans, come get your Senator!

When you demand to attend the #JointSession in person but you'd rather be in Cancún.#SleepyTed pic.twitter.com/NN46iRhtah

During Biden’s address, he mentioned his administration’s legislative agenda, including higher capital gain tax, expanding voting, a Comprehensive Immigration Reform Bill, LGBTQ Health Care, women’s rights, and climate change. House Speaker Nancy Pelosi and Vice President Kamala Harris were standing right behind him. But Cruz did not appear to care one bit about Bidens first 100 days, he just wanted a good nap time because he probably had a hard day.

The footage made its way on social media, of course, and it’s safe to say that Twitter had one heck of a ball. It has been viewed more than 1 million times across several accounts showing slight variations of the same part of the address. Several mocked Cruz by taking jabs at the Senator, including Trevor Noah from The Daily Show tweeting, “Looks like Ted’s eyes are hooked up to his state’s power grid.”

Occupy Democrats editor Grant Stern also took several shots at Cruise saying, “When you demand to attend the #JointSession in person but you’d rather be in Cancún. #SleepyTed.” Cruz did issue a rebuttal of Biden’s speech during an appearance on Fox News’s Hannity show telling host Sean Hannity, “I think the speech tonight, you could sum up three words: boring but radical. The speech tonight, by design, was calm and dulcet tones, you know I challenge you to remember a single line from the speech.”

Yeah, yeah Ted, go off and try to explain yourself. What else do you have to lose? Politics aside, to me this is so rude. I don’t care if you don’t agree with what someone of a higher power is saying, you sit and listen. That’s your job. Shame on you, Ted.

Looks like Ted’s eyes are hooked up to his state’s power grid pic.twitter.com/vC7LUSJ4nJ

There’s no way you’re tired from work…Fighting with Trevor Noah on Twitter all day must be exhausting! 🙄#DemVoice1 #FreshVoicesRise pic.twitter.com/LlaRsbonv1

@tedcruz #sleepyTed #JointAddress Gosh Teddy boy, did you have a rough day? pic.twitter.com/MKooW2EBMz