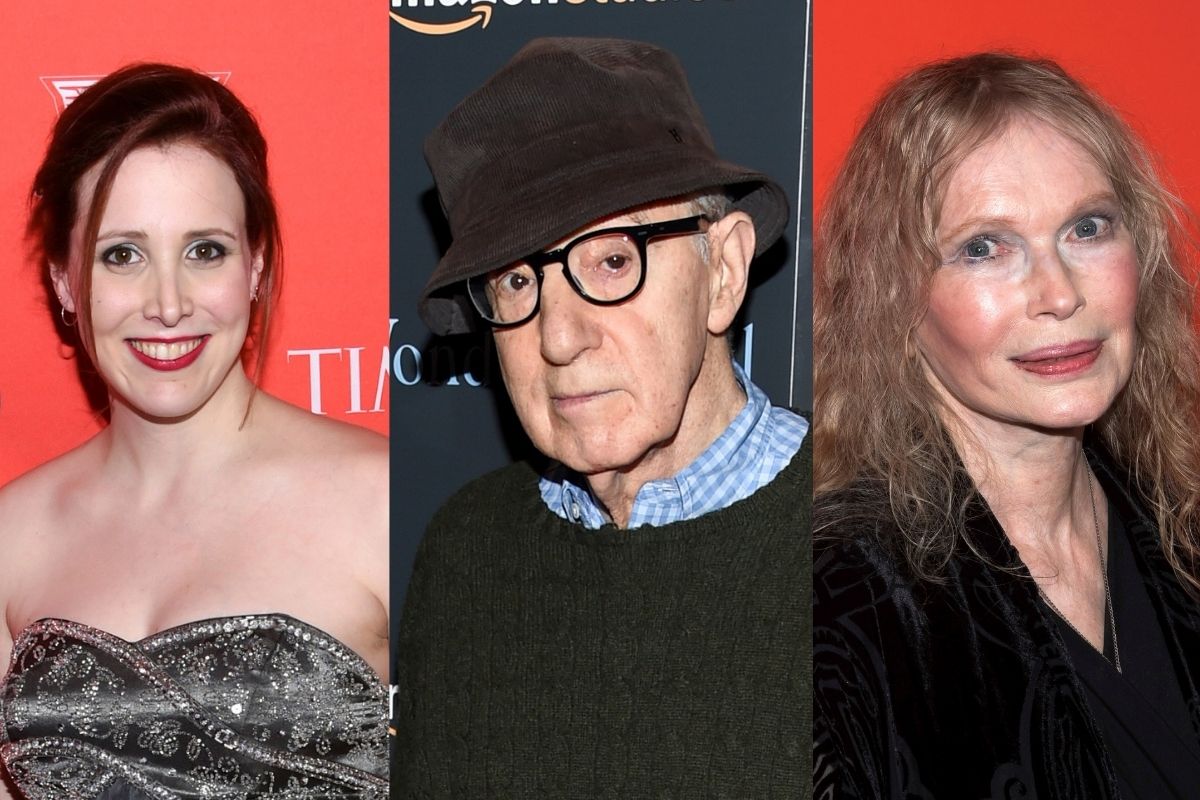 Ever since Woody Allen declared his relationship with Soon-Yi Previn back in 1992, his reputation has been haunted by allegations of abuse. Seducing, and eventually marrying, the college-aged daughter of his longtime girlfriend Mia Farrow was one thing. But soon after the scandalous affair came to light, Mia accused Woody of molesting their young daughter Dylan Farrow. Though Hollywood paid little attention to the alleged sexual assault for decades, it’s come to define Woody Allen’s career and legacy in the wake of the #MeToo movement.

HBO’s new four-part docuseries Allen v. Farrow takes a closer look at Mia Farrow’s claims and the history of her complicated family. With this prickly case back under spotlight scrutiny, here’s a refresher on all the drama:

A Timeline of Woody Allen and Mia Farrow’s Relationship

Mia Farrow and her second husband, the composer André Previn, adopt Soon-Yi Previn from Korea. At the time, Soon-Yi was roughly 7 years old. In Allen v. Farrow, Mia describes struggling to bond with this older, comparatively withdrawn adoptee. At the time, Mia already had two adopted children from Vietnam, Lark Song Previn and Daisy Song Previn. She also had three biological children with André: twins Matthew and Sascha, and Fletcher.

Mia Farrow and André Previn divorced in 1979. The same year, she met Woody Allen at a Manhattan restaurant. Later, Allen called her for a date and the rest is New York history. Woody Allen describes the start of their romance recent memoir, Apropos of Nothing, writing:

“She turned out to be bright, beautiful, she could act… I found myself beginning an affair with a beautiful movie star who could not have been nicer, sweeter, more attentive to my needs.”

Famously, Woody and Mia lives across Central Park from one another. As Carrie Bradshaw so hilariously puts it on Sex and the City: “Ever since Woody Allen described waving to Mia Farrow across the Park… single men in Manhattan had yearned for that kind of separate togetherness.” But as America would later learn, the relationship was far from perfect.

1980: The Adoption of Moses Farrow

1985: The Adoption of Dylan Farrow

Baby girl Dylan is born in Texas in 1985 and adopted by Mia Farrow. Prior to the adoption, Mia told Woody Allen that he could be as involved as he wanted to be in parenting the new child. Prior to Dylan’s adoption, Woody had never expressed much interest in becoming a father figure to any of Mia’s children. He continued to maintain a separate residence even after Dylan was brought home.

Mia Farrow and Woody Allen have a biological son together, Satchel “Ronan” Farrow. (In 2013, Mia publicly suggested that Frank Sinatra was the true father.) As the boy grew up, he became known by his middle name: Ronan. Ronan is now a Pulitzer Prize-winning journalist credited with uncovering the extent of Harvey Weinstein’s sex abuse for The New Yorker. He regularly speaks in support of his sister Dylan and maintains no contact with Woody Allen.

Woody Allen formally adopts Dylan and Moses Farrow, making him the official father of Mia’s three youngest children. Also in 1991, Woody Allen began an affair with Soon-Yi Previn, who was roughly 21 at the time. Allen maintains that he and Soon-Yi kissed for the first time during her first year of college, though Allen V. Farrow challenges that start date and suggests that Woody and Soon-Yi consummated their relationship while she was still in high school.

A Timeline of the Sexual Abuse Scandal

On August 4, 1992, Woody Allen visits Mia Farrow’s Connecticut home to see his children. On this day, Woody allegedly took 7-year-old Dylan up to the attic and sexually molested her. Mia was out of the house at the time, but two babysitters were present. In Allen v. Farrow, those other adults describe being unable to find Dylan and Woody for a period of roughly twenty minutes. Prior to this extreme event, the docuseries also characterized Allen’s behavior around Dylan as regularly inappropriate, touchy, and invasive.

One of the babysitter’s presents had been hired by family friend Casey Pascal. The next day, Casey told Mia that the sitter had observed Woody with his head in Dylan’s lap. When Mia questioned Dylan about it, her daughter spoke directly about being molested. Mia then contacted the family psychologist Susan Coates about the issue.

On August 13, 1992 — less than two weeks after the alleged abuse — Woody Allen sues Mia Farrow for custody of Ronan, Dylan, and Moses Farrow. Two days later, he announces to the public that he and Soon-Yi Previn are in love. The same day, the Connecticut State Police open an investigation into the allegations that Woody molested Dylan. Woody denies the allegations. In November of 1992, Vanity Fair publishes “Mia’s Story.” In response, Woody defended himself on 60 Minutes. (Watch the interview above.) Famously, he said that Mia warned him “You took my daughter and I’m going to take yours.” The theory that Dylan had been “coached” in the accusation by a vengeful mother became a dominant narrative moving forward.

After seven months of investigation, officials at Yale-New Haven Hospital clear the filmmaker of the molesting charges. Mia Farrow maintains that the confidential report was “incomplete and inaccurate.”

Immediately following the findings from Yale-New Haven Hospital, the trial for custody of Moses, Dylan, and Ronan Farrow began. Both Woody Allen and Mia Farrow took the stand. Woody claimed that Mia was punishing him for the affair with Soon-Yi. Mia said that she feared Woody had been attracted to their daughter since she was two years old. Dr. Susan Coates testified in defense of Woody. A child psychiatrist testified in defense of Mia, calling the Yale-New Haven Hospital report “seriously flawed.”

The Yale-New Haven study was then released to the public; it theorized that Dylan was indeed coached by her mother to accuse Woody Allen due to inconsistencies in Dylan’s interviews. However, since, inconsistencies have been proven in lead Dr. John M. Leventhal’s testimony.

In the end, Woody Allen was denied custody — and denied visitation rights with Dylan specifically. The judge called him “self-absorbed, untrustworthy, and insensitive.” Three months later, Connecticut state’s attorney Frank Maco stated that while he “probable cause” to further prosecute Woody, he would not in order to “spare” Dylan the trauma.

2014: Dylan Farrow publishes her op-ed in The New York Times

I love my daughter. I will always protect her. A lot of ugliness is going to be aimed at me. But this is not about me, it's about her truth.

In response to Woody Allen’s lifetime achievement award at the Golden Globes, Ronan Farrow tweeted calling his father out for sexual abuse. Less than a month later, Dylan Farrow releases her detailed op-ed in The New York Times which illustrates her memories of the assault. It reignites the public furor.

In a guest column for The Hollywood Reporter, Ronan Farrow addresses the difficulties his sister has faced in telling her story. He believes her and supports her, unequivocally.

“I was taken to a small attic crawl space in my mother’s country house in Connecticut by my father. He instructed me to lay down on my stomach and play with my brother’s toy train that was set up. And he sat behind me in the doorway, and as I played with the toy train, I was sexually assaulted … As a 7-year-old I would say, I would have said he touched my private parts.”

Four months after Dylan Farrow’s damning CBS interview, as the story gained more traction, Moses Farrow goes on the record with a detailed analysis of the sexual assault allegations. Writing in his personal blog, Moses outlines the painful climate of the Farrow household and details the context of what occurred on August 4, 1991. Moses is now a licensed family therapist who specializes in dealing with adoptees, and so his account seems especially lucid. Moses says that it is nearly impossible Woody could have taken Dylan alone to the attic under so much intense supervision and suspicion. Additionally, Moses relays the emotional and physical abuse which he remembers himself and his siblings facing at the hands of Mia Farrow. Read the full post here.

Over the past two years, as Dylan Farrow’s story became more publicized, Woody Allen’s prolific career definitely declined. Amazon called his $68 million movie deal. (Woody eventually sued; it was settled out of court.) The publication of Woody’s memoir, Apropos of Nothing, was canceled by Grand Central Publishing, an imprint of Hachette Book Group after employees staged a high-profile walkout. (The book was eventually released by Arcade Publishing.) Many celebrities have also come forth to condemn the director and apologize for working with him. Others, like Diane Keaton, stand by their friend.

As for Soon-Yi Previn, she is still with Woody Allen. The couple has been married since 1997 and they share two adopted children. Read about Soon-Yi, in her own words, in this rare Vulture interview conducted by Daphne Merkin.

To learn more about the personal story of these abuse allegations, tune into Allen v. Farrow on HBO — new episodes every Sunday. But don’t expect to hear from Woody Allen or Soon-Yi Previn on the matter. They declined to take part in the new series, calling it “a hatchet job riddled with falsehoods.” And while it’s true that the agenda of filmmakers Kirby Dick and Amy Ziering undoubtedly supports Dylan’s allegations, the series is an informative and well-constructed look at one of the greatest scandals of American cinema; one which continues to fascinate and repel fans and, like the title insinuates, force sides.