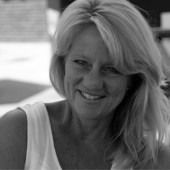 Terese Schlachter is Founder and President of Ridgeback Communications, which specializes in highly produced videos, telling the story of your business… your passion… your life. Before she crowned herself queen of Ridgeback Comms, she was an Emmy- winning documentary producer for the Department of Defense.

Before that she produced a lot of political stuff out of NBC News’ Washington Bureau. She lives near beautiful Selby Bay in Edgewater, Maryland with two… wait for it….Rhodesian Ridgeback dogs.