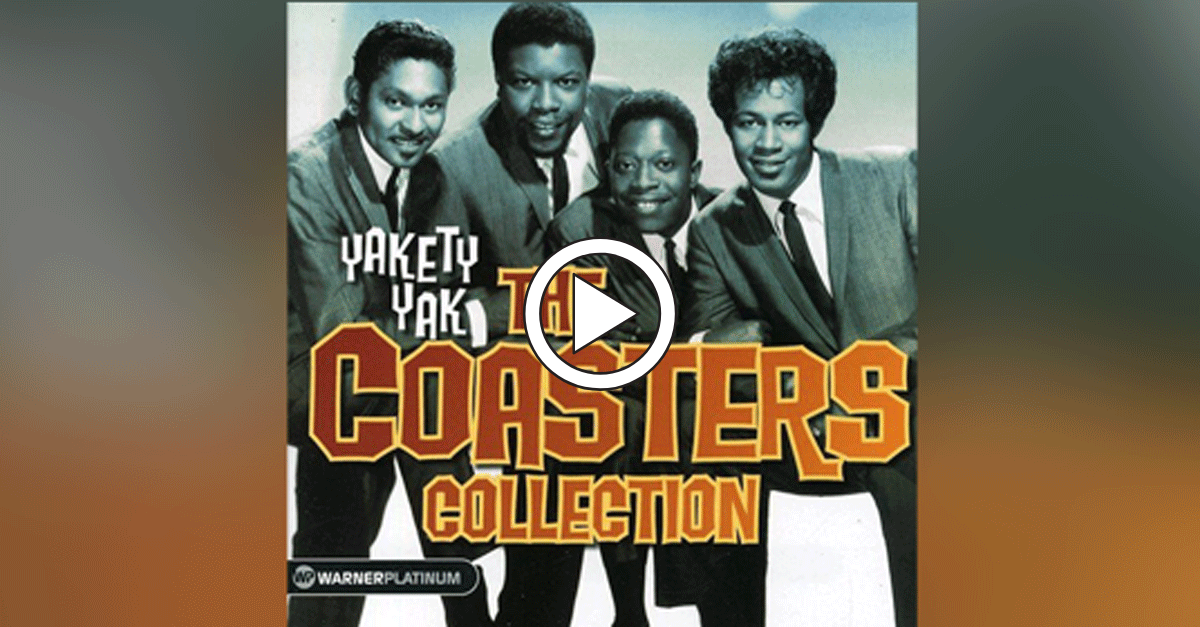 This one’s for the rock and roll people out there. Whether you’re into classical, rockabilly, hair metal, traditional or crust punk, or even the screamy stuff that guys in tight pants “sing” these days, it’s more or less all in the same boat. Rock ‘n’ roll is the stuff dreams are made of and parents’ greatest fears. This was still the case when the genre resembled blues music, rhythm and blues, gospel and boogie-woogie. There were a few acts, however, that managed to crossover between genres.

One of those was The Coasters, from Los Angeles, California, with their hit “Yakety Yak”.

Enjoy this performance of “Yakety Yak” performed by the Coasters.

“Yakety Yak” was a #1 hit sung by The Coasters that landed on the 1958 R&B charts and the Top 100 pop hit list. In the 1940s, the line between the rock and roll, and the rhythm and blues genre was somewhat blurred. The fact that there were fewer sub-genres and the instrumentation used between the two were very similar was a heavy contributing factor.

This rock and roll hit, “Yakety Yak,” was written by Jerry Leiber and Mike Stoller.

Leiber and Stoller were songwriters who used their perspective skills, one as a composer, the other as a lyricist to create chart topping hits for popular artists. The songs vary from artist to genre but most of which are still revered today. For example, there’s “Hound Dog” and “Jailhouse Rock” performed by Elvis Presley, “There Goes My Baby,” performed by the Drifters. The Duo even co-wrote on “Stand By Me” by Ben E. King.

As The Coasters were considered a rock ‘n’ roll / R&B crossover act, they earned acclaim within many demographics. They placed 14 songs on the R&B charts, eight of which crossed over to the Pop Top Forty. Their popularity rose significantly between 1957 to 1959 when they released a half dozen singles that dominated the charts in an early Rock and Roll golden era.

The catch tune, “Yakety Yak” is essentially a (still relatable) conversation between a teenager and their parent. As the teen is being told to do household chores, they call their parents reprimands “yakety yak,” a modern day “blah blah”. Which is where the song’s controversy starts. For starters, The Coasters look like this:

Let’s have an honest conversation real quick here, people. Most people who look like that (i.e. are African-Americans) aren’t in the habit of speaking to their parents in that manner. Just as Latinx moms are known for the chancla, black mom’s will “whoop” you or remind you that “they brought you into this world and can take you out”. That sounds pretty close to “You ain?t gonna rock and roll no more” to me. Taking a look at these lyrics, it’s easy to see why any mom would be frustrated at said mouthy kid. Because regardless of any physical, biological factors, getting teens to do chores is a chore itself.

“Yakety Yak” Lyrics and the Controversy

“Take out the papers and the trash  // Or you don?t get no spendin? cash

If you don?t scrub that kitchen floor // You ain?t gonna rock and roll no more

Just finish cleanin? up your room // Let?s see that dust fly with that broom

Get all that garbage out of sight // Or you don?t go out Friday night

And when you finish doin? that // Bring in the dog and put out the cat

Don?t you give me no dirty looks // Your father?s hip, he knows what cooks

Just tell your hoodlum friend outside // You ain?t got time to take a ride

Lyricist Jerry Leiber spoke on the controversy saying that in the song the Coasters sang “a white kid?s view of a black person?s conception of white society”. He continued, in a 1992 interview,  “..their success showed how thin was the line between rhythm & blues and rock and roll in the Fifties. Our songs were R&B; hits that white kids were attracted to. And if people bought it, it became rock and roll.” The controversy was overall small and the track is enjoyed to this day in the United States. Regardless, if it hadn’t cause at least a little bit of controversy, could the song truly be considered Rock ‘N’ Roll?

Drama aside, it’s pretty obvious why this song is a hit. Especially with Ronnie Bright hitting those low bass notes so smoothly.

The song is still recognizable today because it’s a classic movie song. Remember The Great Outdoors with John Candy or Twins? How about October Sky or Rags to Riches? Mary Kate and Ashley Olsen even recorded their own version after It Takes Two premiered with the song featured.