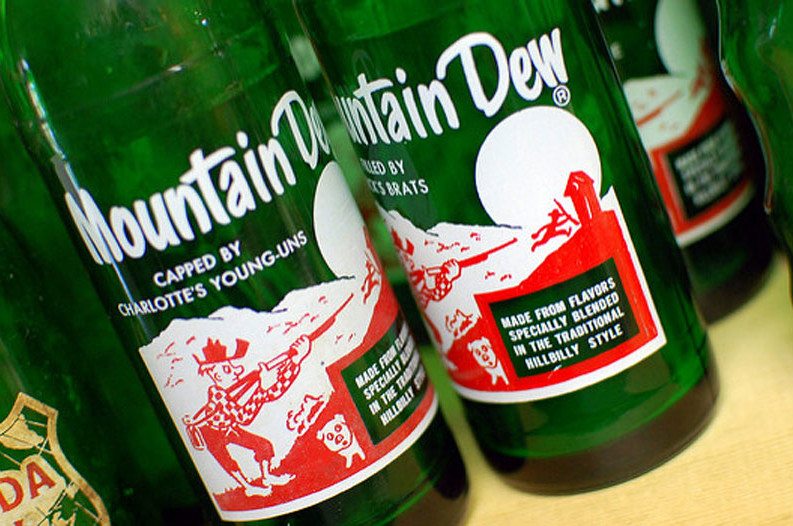 Oh, Mountain Dew, sweet elixir of kids playing video games everywhere. It’s the soda our mothers warned us about and our doctors despise. However, that electric green drink has a storied history beginning in the hills of Tennessee.

Here are 10 things you didn’t know about Mountain Dew, sugar rush not included.

10. Mountain Dew was created to be a moonshine mixer.

Barney and Ally Hartman were bottle developers in Tennessee who were tired of people complaining that weren’t any good mixers for moonshine on the market. So they got to work.

9. The name has interesting roots.

Mountain Dew was a popular phrase used by Scottish and Irish immigrants to Appalachia to describe moonshine. The Hartman Brothers received the suggestion with open arms and in the 1940s, the trademark was born.

8. When PepsiCo bought the company, it became something much, much different.

We tend to associate the brand with teenagers and that is due in large part to the fact that when PepsiCo bought Mountain Dew in 1964, they switched directions entirely and started marketing it toward a younger, outdoorsy generation. Did it work?

The original Hartman Brothers recipe was originally closer to what we know as Sprite today, but in the 1960s, Bill Bridgforth changed that. As the manager of the plant, he decided to start putting his own Tri-City Lemonade in Mountain Dew bottles, which caused sales to take off.

6. There is orange juice in Mountain Dew.

Going with the citrus lemonade idea, Mountain Dew went all in. On the back of the bottle or can, you’ll find that concentrated orange juice, high fructose corn syrup, and carbonated are three key ingredients.

5. The original slogan played off its moonshine heritage.

The first slogan for the soda was, “Ya-Hoo Mountain Dew. It’ll tickle your innards” as a barefooted mountain man yelled on the commercial, “Shore as shootin’, there’s a bang in every bottle.”

4. Only four non-coffee drinks have more caffeine than a can of the green elixir.

3. Does it taste good because there’s flame retardant in it?

Well, there is flame retardant, but that’s not why it tastes good. The Food and Drug Administration allows up to 15 parts per million of BVO, or brominated vegetable oil, in fruit-flavored beverages. BVO was first patented as a flame retardant for plastics.

In Eastern Kentucky, PepsiCo reached out to dentists to help try and stop tooth decay in children. The dentists colloquially called the problem Mountain Dew Mouth, mostly because the soda is loaded with sugar. We love it anyway.

1. It was supposed to be even more caffeinated.

When it was being bottled, PepsiCo producers noticed that there was so much caffeine, it was crystallizing in the glass to form what looked like slivers of ice. They decreased the caffeine partly to prevent the bottles from bursting.

Channel the roots of Mountain Dew and pair it with our green apple Jolly Rancher moonshine. It’s a match made in heaven.