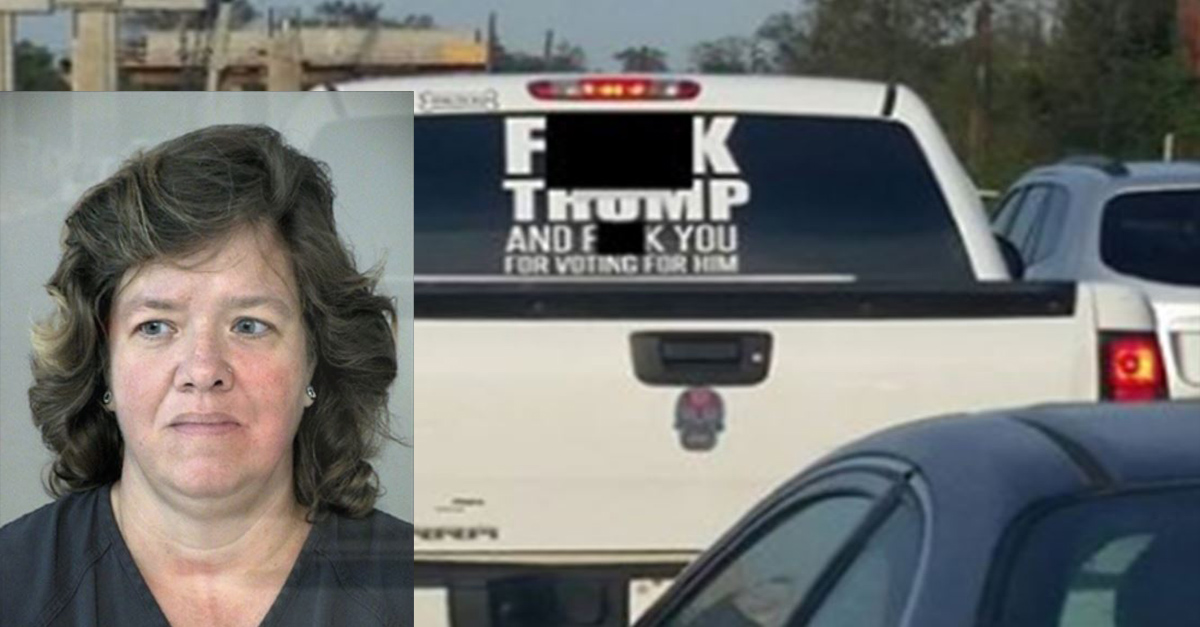 Karen Fonseca’s 15 minutes of fame has borne fruit, but for her, it’s a sour taste. The Texas woman was arrested on Thursday after a “F**k Trump” sticker on her truck gained national attention; now, the Texas sheriff who brought her in is talking about the arrest.

Fort Bend County Sheriff Troy Nehls’ office says Fonseca was arrested for an “outstanding felony warrant arising out of an investigation conducted by the Rosenberg Police Department.” The sheriff also pushed back on the idea that the arrest was politically motivated, with the following statement:

The only connection between her arrest and her decision to drive around with an obscenity displayed on her vehicle was the fact that it lead us to her name which in turn revealed the existence of this Felony warrant. Once this connection was made, personnel did their job in a professional and appropriate manner by serving this Felony warrant.

The warrant for Fonseca’s arrest stems from a three-year-old fraud charge. KHOU managed to access the indictment but note that it doesn’t shed much light on her arrest, only that she is accused of “using someone’s personal identifying information without their consent.” When reached, the victim in that case declined to speak but did confirm that she knows the suspect. Fonseca says that she has no doubt there’s another motivation behind her arrest, telling KHOU, “People abuse the badge, in my opinion, and money talks.”

The saga of the now famous bumper sticker began when Nehls’ office posted a photo of the truck on their Facebook page. That post has since been deleted, but in it, they wrote, “I have received numerous calls regarding the offensive display on this truck.” They added, “If you know who owns this truck or it is yours, I would like to discuss it with you. Our Prosecutor has informed us she would accept Disorderly Conduct charges regarding it, but I feel we could come to an agreement regarding a modification to it.”

When Karen Fonseca and her husband, Mike, were finally identified, they said, “There’s no law against freedom of speech, nothing in the law book here in Texas, I’ve been stopped numerous times, but they can’t write me a ticket.” Mike added, “Unless [the sheriff] can show me where it says that in the law book, it’s not coming down until the weather takes it down, or I replace it with something else.”

RELATED: The “F**k Trump” bumper sticker is just the tip of the iceberg

In a press conference on Wednesday, Nehls said that he didn’t want to press charges, instead saying he just wants to talk to the Fonsecas and see if they can come to an agreement. The sheriff told the press, “I don’t want to see anything happen to anyone…that’s the last thing we need, a breach of the peace.”

Free speech advocates have shown their support for the Fonseca’s bumper sticker. The ACLU even commented on Nehls Facebook post, writing, “No Sheriff Nehls, you can’t prosecute speech just because it contains words you don’t like.” When asked on Thursday by ABC 13 if he will prosecute the Fonsecas over the bumper sticker, Fort Bend County District Attorney John Healey said, “No, I would not take the case.”