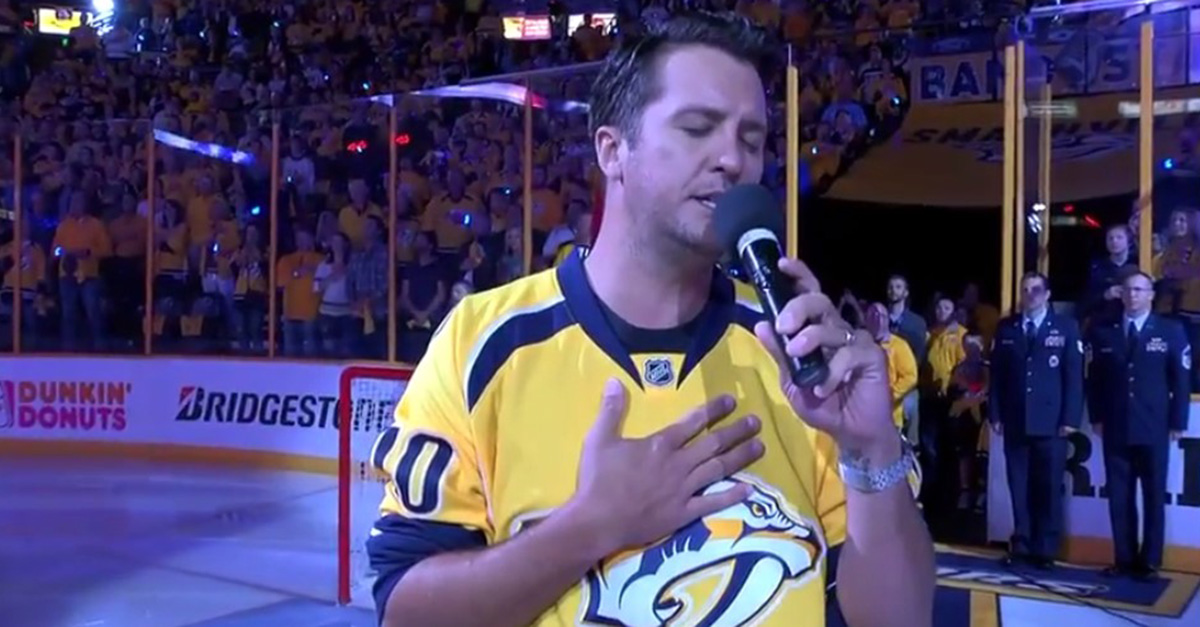 Country music superstars have been coming out to support the NHL Nashville Predators. And, it appears as though they’ve been bringing good luck with them, because the hockey team has been on quite a winning streak.

On April 20, Luke Bryan surprised fans at Nashville’s Bridgestone Arena when he appeared on the ice to sing the national anthem before the Predators played the Chicago Blackhawks in Game 4 of the Stanley Cup Playoffs series.

The 40-year-old Georgian appropriately sported a Predators jersey for the match, as he belted out the patriotic song in front of thousands of onlookers. Prior to singing the first note, he appeared a bit nervous tapping on his chest. But, nonetheless, he did a spectacular job!

After singing “The Star-Spangled Banner,” Luke posted a photo of himself on Instagram showcasing his Predators pride. He wrote, “Lets do this @predsNHL. #predspride.”

lets do this @predsNHL. #predspride

And, sure enough, the team defeated the Blackhawks 4-1, finishing out their first-round Stanley Cup Playoffs series with a four-game sweep.

This is the second time in less than a week that a country artist has turned out a surprise performance of the national anthem at a Preds game. On April 18, Carrie Underwood performed the tune, while wearing her husband, Nashville Predators Captain Mike Fisher’s, No. 12 jersey.

Following Luke’s performance, Carrie took to Twitter to congratulate him on his rendition of “The Star-Spangled Banner.” She tweeted, “Awesome job on the anthem, @LukeBryanOnline !!! Thanks for revving our boys up for the game! #NSHvsCHI #ThisIsHowWeRoll”

Awesome job on the anthem, @LukeBryanOnline !!! Thanks for revving our boys up for the game! #NSHvsCHI #ThisIsHowWeRoll

Earlier this year, Luke performed the national anthem before kick-off at Super Bowl 51. So, it’s clear that he’s becoming a pro at singing the song!

Watch the video above to see Luke’s sing his heart out ahead of the big game!