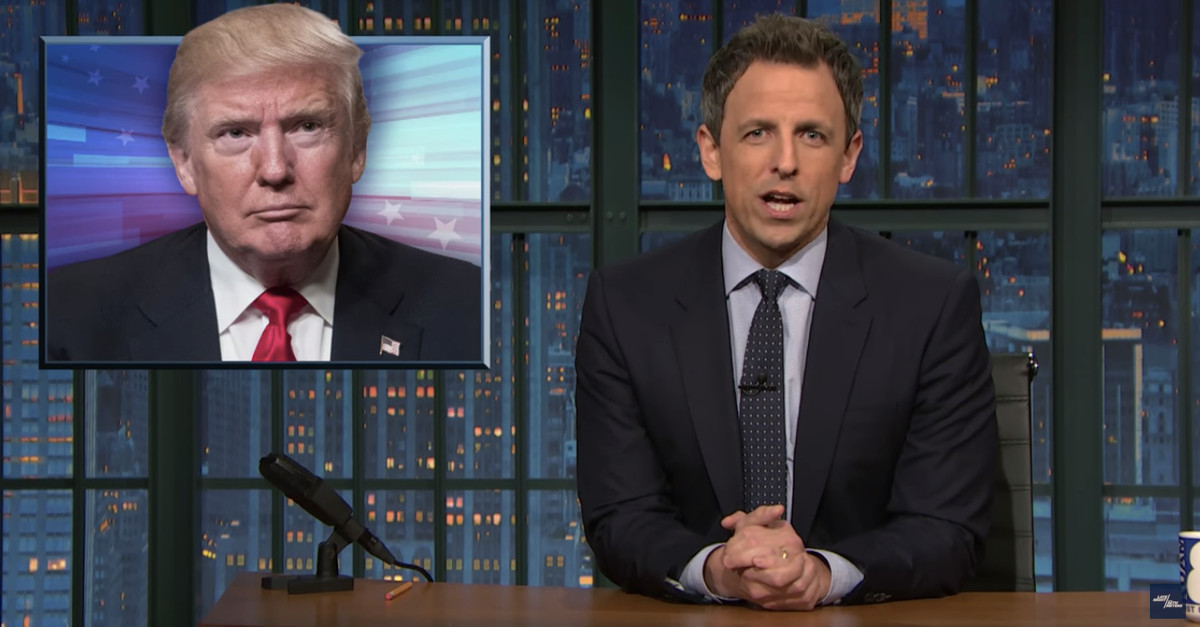 It certainly appears there will be no dearth of comedic gold for the late-night shows to mine with the Donald Trump administration, and Seth Meyers is quickly emerging as a must-watch.

Meyers recently held Trump counselor Kellyanne Conway’s feet to the fire when breaking news about Russia’s interference in the election happened just before the show went on air. On Monday, Meyers used his “A Closer Look” segment to shine a hilarious light on Conway’s “alternative facts” comment and the massive Women’s March.

Meyers opened the segment with news clips of rallies occurring on all seven continents, including a group in Antarctica. He said imagine being so disliked that people are willing to “go outside and protest you in Antarctica.”

RELATED: Legalization activists smoke up and stand out at Trump Inauguration

“That’s like if you climbed Mount Everest and when you got to the top there was guy standing there booing you.”

Meyers then moved onto Trump’s inauguration speech. Saying Trump’s “approval ratings, true story, are almost as low as his tie.” So, Meyers continued, Trump might have used his speech as an opportunity to unite the country and provide an uplifting vision of the future.

“Instead he opted for nightmarish, dystopian hell-scape,” Meyers said.

It led into a clip of Trump’s speech in which he mentioned “rusted-out factories scattered like tombstones,” and “the crime and the gangs and the drugs, America’s infrastructure has fallen into disrepair and decay. This American carnage stops right here, and stops right now.”

Later in the segment, Meyers turned to one of the more eye-raising moments of the past weekend when Trump counselor Kellyanne Conway introduced the term “alternative facts” to explain why press secretary Sean Spencer had scolded the media for accurately reporting the size of the inauguration crowd.

Conway was on NBC’s “Meet the Press” and was asked by anchor Chuck Todd: “Why put him out there for the very first time in front of that podium to utter a provable falsehood? It undermines the credibility of the entire White House press office on Day 1.”

Conway’s response: “…Your saying it is a falsehood, and they’re giving, Sean Spicer, our press secretary, gave alternative facts to that.”

Chimed a smiling Meyers: “Kellyanne Conway is like someone trying to do the Jedi mind trick after only a week of Jedi training:

‘These are not the droids you’re looking for.’

‘Yeah, they are, those are my droids.’

‘No, these are … alternative robots.'”