Before “Elvis impersonator” was a common term, let alone an actual career path, Andy Kaufman blew audiences away during his performance on Johnny Carson’s Tonight Show. The year was 1977. He first began the set as his awkward “Foreign Man” character (which first appeared on SNL before becoming the basis for his role as Latka Gravis on the sitcom Taxi). As “Foreign Man,” Kaufman timidly repeated an Archie Bunker tirade, followed by a wimpy attempt at Ed McMahon’s “Here’s… Johnny!”

This uncomfortable (but chuckle-worthy) first minute-and-a-half primed the audience for total confusion as the theme from 2001: A Space Odyssey began to blast and Kaufman turned around, undressing. Stripping his beige suit jacket and ripping off long strips of material from his pants to reveal a sick stud lining, the idea starts to come into focus. The banging, familiar orchestra swells as Kaufman continues to change without facing the camera; he now dons a cool leather jacket and combs grease into his hair. And just when you think he’s done – BAM! The Space Odyssey begins again. The drawn-out tension is hilarious. After nearly two minutes of prep, Andy Kaufman finally picks up a guitar… and does Elvis Presley.

Andy Kaufman’s non-traditional form of comedy was increasingly popular during the 1970’s. “I am not a comic,” he famously said in a rare interview. “I have never told a joke.” Instead, he relied on song and dance to express himself and embodied goofy characters in the process.

But when Andy Kaufman starts to sing on The Tonight Show Starring Johnny Carson, you might do a double take. Did this weirdo stand-up comedy really just turn into a whole set by the King of Rock ‘n’ Roll? His tone is flawless from the first note, taking on Elvis’ “Love Me.” Small hiccups in the act, and the audience’s gleefully fan-girling reactions, only seem to confirm the atmosphere of Elvis which was so palpable on The Tonight Show that night.

Including the rocky “Foreign Man” prelude, Andy Kaufman’s eight-minute Tonight Show act provides a breathtaking meta commentary on impressions and performance comedy. Subverting overplayed Archie Bunker expectations with an objectively bad accent was, arguably, funnier than any conventional approach — at least at the time. And to follow it with a pitch-perfect Elvis Presley lifts the performance into psychological experimentation. The rendering demonstrates the depths of Kaufman’s talents as not only an observer but as a participant in the theater of American pop culture. And in that role, Kaufman takes himself just seriously enough.

Kaufman is just great at Elvis. And he knows it. In 1969, he hitchhiked to Las Vegas to meet Elvis at The International Hotel and, legend has it, his studied routine was in the works ever since.

Sadly, Andy Kaufman also passed just seven years later. He was 35 years old. However, Andy Kaufman often joked about faking his own death and many fans hold out hope that his battle with rare lung cancer was really an elaborate hoax. After all, the only thing bolder than impersonating Elvis in life, is impersonating him in death. Or at least in a vast death conspiracy. Those rumors were fueled by supposed spottings of Kaufman’s “Tony Clifton” character at various Los Angeles comedy clubs.

In 2013, Andy Kaufman’s friends and fans compiled the debut audio album, “Andy and his Grandmother,” based on 80 hours of Kaufman’s microcassette recordings from the late 70’s. This new addition to the Kaufman oeuvre only encourages the belief that not only does he lives, he thrives.

You can learn more about the life of Andy Kaufman in the 1999 biopic, Man on the Moon. You can also explore YouTube for the recordings of his numerous tv show guest appearances. (We’ve linked a few below.) But most excitingly, you can experience Kaufman’s legacy by enjoying any of the countless comics he influenced so greatly: Steve Martin, Jim Carrey, Sacha Baron Cohen, Robin Williams, Eric Andre, Bill Hader, Bob Zmuda, and so many more. 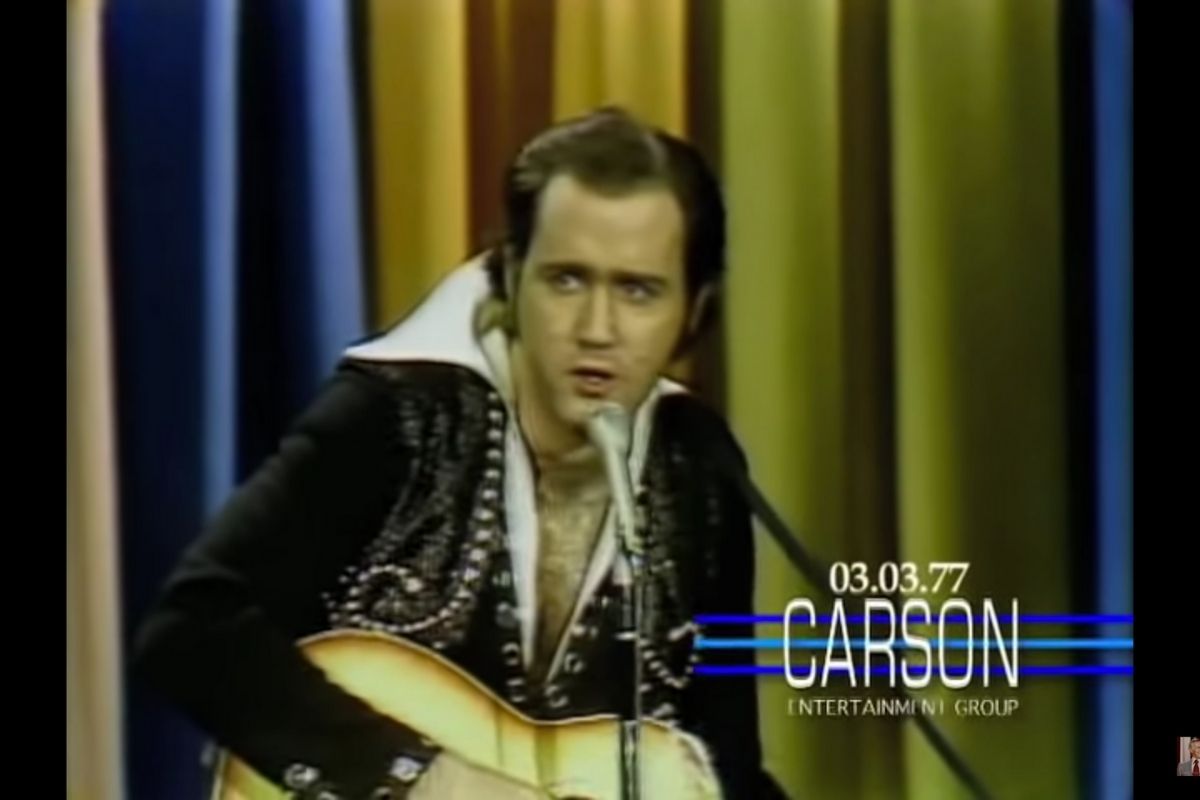